Wellesley College Launches Ravencam: The First Opportunity to Closely Observe the Most Creative of Birds in Contact With People 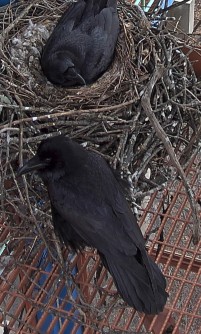 A rare sight: two ravens have made their nest on the fire escape of Wellesley College's Science Center. Watch Ravencam, a live webcam that will record the birds' behavior at the nest 24 hours per day at www.wellesley.edu/ravencam.

Newswise — WELLESLEY, Massachusetts—A pair of ravens have taken up residence at Wellesley College, and scientists, students, and bird enthusiasts alike are taking advantage of a rare opportunity to closely observe some of the most playful, social, and fun-loving of wild birds. Wellesley has launched Ravencam, a live webcam that will record the birds' behavior at the nest 24 hours per day for scientific purposes. Ravencam is available to anyone with an Internet connection at http://www.wellesley.edu/ravencam.

Ravens typically mate for life. This pair has made their nest on the partially glass-enclosed fire escape of the college’s Science Center and laid two eggs that are expected to hatch in mid-April. Because ravens are usually found in rural areas, the presence of their nest on Wellesley’s campus, which is located within a well-populated Boston suburb, is an extraordinary occurrence.

In the Northeast, ravens have been birds of the remote wilds until fairly recently; they have been increasing in abundance in this area since the mid 1970s. No one knows why, says Frost Professor of Environmental Science and Professor of Biological Sciences Nicholas Rodenhouse. "Ours is the first opportunity to closely observe this most creative of birds in close contact with people," he says. "Much can potentially be learned about parental behavior, vocalizations, diet, and more."

Though ravens are some of the most often-depicted birds in arts and literature, not much is known about ravens in urban environments, and no one has ever before had the opportunity to observe urban ravens at the nest closely. Student researchers will help analyze and interpret the data, with Rodenhouse as their advisor.

According to Wellesley student Lauren Johnson, who was the first person to spot the ravens in October 2013, one of the most unique opportunities presented by the webcam, and by the ravens’ choice to nest near existing lighting, is the ability to observe the ravens’ behavior at night. “Because the nest area is lit up at night by lights that are nearby, we can actually see the birds sleeping. In their natural habitat, we could not observe the birds at night because it would be dark,” she said.

Johnson, currently a Wellesley sophomore majoring in Biology and Spanish, has been interested in birds since she was a middle-school student researching Saw-whet Owls in her hometown, Haverford, Pennsylvania. Last summer she worked with Professor Rodenhouse on a long-term demographic study of Black-throated Blue Warblers at Hubbard Brook Experimental Forest in New Hampshire.

The ravens chose Wellesley College most likely for its cliff-like buildings in a productive landscape. (And, of course, ravens are among the smartest of birds.) The Science Center, surrounded by shrubs and trees, sits alongside an open, sometimes damp meadow. Wellesley scientists have affectionately named the ravens "Pauline" and "Henry" after Henry and Pauline Durant, the founders of Wellesley College.

According to Professor Rodenhouse, the ravens' coming to Wellesley is emblematic of the re-wilding that has taken place in New England over the past century. Other wild animal species now living with us (and sometimes spotted on Wellesley's campus) include American turkey, beaver, pileated woodpecker, red fox, and white-tailed deer. Rodenhouse said, “Nature is resilient. This a positive message for those concerned about the environment.”