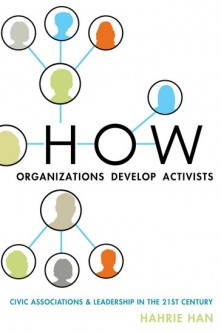 Newswise — Wellesley, Mass., July 9, 2014 – In a time of rising inequality and polarized politics, civic and political organizations around the country are in a pitched battle for power over government. As these organizations mobilize for the 2014 midterm elections and the 2016 presidential elections in an atmosphere of declining trust in government, many are struggling to recruit and retain the activists they need to win. A new book by Hahrie Han, associate professor of political science at Wellesley College, offers an insider’s perspective on what makes some organizations better than others at this task.

How Organizations Develop Activists: Civic Associations and Leadership in the 21st Century (Oxford University Press, 2014) examines the strategies that the most effective civic associations use to engage activists and develop civic leaders in health and environmental politics. Looking at how organizations blend online and offline strategies to build their activist base, the book explains how civic associations can invest in their members to build the capacity they need to inspire action.

“Some organizations spend a lot of energy trying to find a charismatic leader, raise more money, or craft a catchy message. Others focus on leveraging big data to target likely recruits,” Han said. “These factors matter, but they miss something important. What really differentiates the organizations with the highest levels of activism from all other civic organizations is the way they invest in building the motivation, knowledge, and skills of their members.”

Han’s book is the first to provide an in-depth look at the models and strategies civic associations use for engaging activists in the digital era. Until now, many studies of civic associations, interest groups, and social movements offered a perspective that pre-dated the Internet age or provided only a limited view of the organizations’ strategies.

“A central source of power for political organizations is their ability to engage people,” Han said. “The 2014 and 2016 elections put a spotlight on the work many organizations across the country do year-round to get people involved in electoral politics and issue advocacy campaigns. My book speaks directly to the challenges these groups will face in understanding how to engage more activists and leaders and provides a detailed glimpse of strategies they can use.”

Hahrie Han is an associate professor of political science at Wellesley College and was a Robert Wood Johnson Foundation Scholar in Health Policy Research at Harvard University from 2009 to 2011. Her research focuses on civic associations, civic engagement, engagement organizing, political activism, health and environmental politics, polarization, and elections. She specializes in the field of American politics, focusing particularly on the role that civic associations play in mobilizing participation in politics and policy advocacy.