Newswise — Today, NASA announced that it is naming its next-generation space telescope, the Wide Field Infrared Survey Telescope (WFIRST), in honor of Dr. Nancy Grace Roman, NASA’s first Chief Astronomer, who paved the way for space telescopes focused on the broader universe. The newly named Nancy Grace Roman Space Telescope (or Roman Space Telescope, for short), is set to launch in the mid-2020s.

Dr. Roman is credited with making the Hubble Space Telescope a reality, leading to her nickname “mother of Hubble.” In the mid-1960s, she set up a committee of astronomers and engineers to envision a telescope that could accomplish important scientific goals. She convinced NASA and Congress that it was a priority to launch the most powerful space telescope the world had ever seen. She argued that, for the price of a movie ticket, each American could be given years of scientific discoveries.

Her vision was realized when Hubble launched in 1990. Hubble turned out to be the most scientifically revolutionary space telescope of all time.

STScI and the Roman Space Telescope

“Dr. Nancy Grace Roman was an accomplished scientist and leader, as well as a staunch advocate of Hubble and NASA’s other Great Observatories. She also strongly backed the creation of STScI. We thought of her as a colleague and friend, and were delighted to welcome her to the Institute for our annual spring science symposium in 2017,” said STScI Director Kenneth Sembach.

“We are honored to be part of her continuing legacy. Our entire team stands ready to support the astronomical community and ensure that the Roman Space Telescope will achieve its full scientific potential,” he added.

All of the data collected by the Roman Space Telescope will be held in the Barbara A. Mikulski Archive for Space Telescopes (MAST) at STScI and made immediately available for any investigation. Astronomers around the world will be able to mine data from these archives to conduct a broad range of studies, greatly increasing the impact of the mission. The observatory will collect an estimated 20 petabytes of data over its planned 5-year mission – the equivalent of a 40,000-year-long song in mp3 format.

The Science of the Roman Space Telescope

The Roman Space Telescope will have the same sensitivity and resolution as the Hubble Space Telescope, but will have a viewing area 100 times bigger than Hubble. Each single image from Roman will encompass an area of the sky that is larger than the size of the full Moon as seen from Earth.

It will survey the sky in infrared light, which is invisible to human eyes. Infrared light provides a powerful tool for exploring the cosmos because it penetrates dust clouds that block visible and higher-energy light from view.

The Roman Space Telescope will work in concert with the James Webb Space Telescope to yield greater insights than either telescope could achieve on its own. Its wide field of view will reveal diverse populations of astronomical objects and net a bounty of intriguing targets for Webb to follow up on with unprecedented sensitivity.

Like Hubble and the other NASA Great Observatories, the Roman Space Telescope will contribute to advances across the field of astrophysics. It will image stars and gas in our own galaxy, measuring its structure, surveying the birthplaces of stars, and finding telltale signs of smaller galaxies torn apart by interactions with the Milky Way. It will investigate new dwarf planets, comets, and asteroids in our solar system. It will also image large clusters of galaxies, characterize the dark matter around them, and discover thousands of galaxies at very high redshifts, which will provide the tools to study how galaxies evolve over cosmic time.

The Roman Space Telescope will deliver new insights into the history and structure of the universe, including the mysterious “dark energy” that is making space itself expand faster and faster. This powerful new observatory will also build on the broad foundation of work begun with Hubble and other observatories on planets outside our solar system. It will discover thousands of exoplanets using its wide-field camera and study the atmospheres of giant gaseous planets orbiting other stars with a sophisticated technology demonstration coronagraph.

Ultimately the telescope that bears Dr. Nancy Grace Roman’s name will allow researchers to do what she once said:

“If you enjoy puzzles, science or engineering may be the field for you, because scientific research and engineering is a continuous series of solving puzzles.” 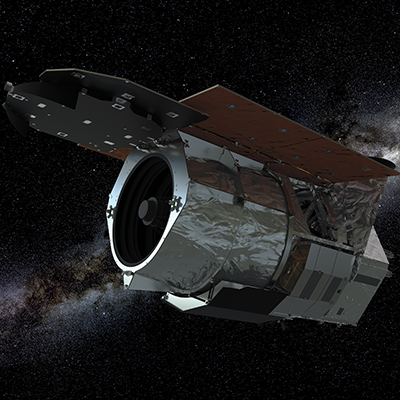 Caption: This is an artist’s illustration of the Nancy Grace Roman Space Telescope spacecraft against a starry background. The Roman Space Telescope is a Hubble-sized telescope planned for launch in the mid-2020s. It will revolutionize astronomy by building on the science discoveries and technological leaps of the Hubble and James Webb space telescopes.

Caption: Dr. Nancy Grace Roman, NASA's first chief of astronomy, poses in 1966 with a model of what would become the Hubble Space Telescope.