What Frog Courtship Can Tell Us About Human Small Talk 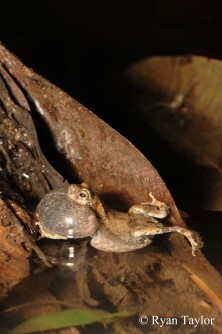 A male túngara frog calls while floating in a pond in the Panamanian rainforest. His inflated vocal sac is clearly visible. 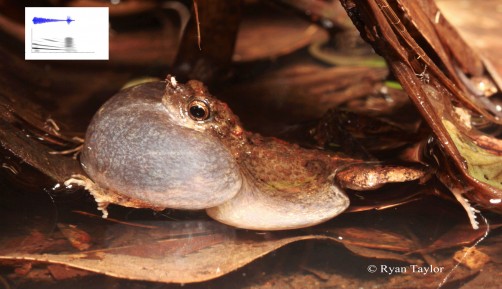 A male túngara frog calls, with his inflated vocal sac clearly visible. The inset is a waveform and spectrogram showing the two call notes that males normally make. The first note is a "whine," followed by a "chuck." 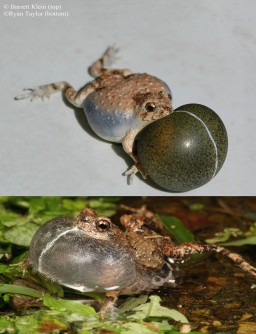 Newswise — WASHINGTON, D.C., May 5, 2014 -- If you've ever heard the boisterous courtship sounds being made at night by male frogs gathered around a pond or "watering hole" to attract mates, you may have noticed some communication similarities to those of humans enjoying a loud night out at a cocktail party or bar—that familiar cacophony with everyone essentially shouting over each other to be heard.

At the 167th meeting of the Acoustical Society of America, to be held May 5-9, 2014 in Providence, Rhode Island, Ryan C. Taylor, an associate professor in the Department of Biological Sciences at Salisbury University in Maryland, will describe how his work studying how frogs communicate—aided by a robotic frog—is addressing some long-standing basic questions about how evolutionary processes shape the diversity of communication systems.

Female frogs, for example, express strong mating preferences for particular properties of male vocalizations, but exactly how they're able to identify individual callers within the noisy chorus environment remains unclear.

One possible answer is that the females are relying on a combination of acoustic and visual cues.

"Although vocalizations are required for mate attraction, the inflating 'throat pouch,' otherwise known as a vocal sac, produced by males during 'calling,' plays a significant role in attracting a mate," explained Taylor. "Females pay attention to the timing of the sound they hear and the vocal sac movement they can see. If these two cues don't match closely in time and space, females reject the signal."

Taylor and colleagues found that by rearranging the timing of call notes and vocal sac movements to sandwich the vocal sac between two call notes, they were able to restore the attractiveness of the call—even though it was completely unnatural.

From a basic biological perspective, "this suggests that the female frog's brain provides the basis for the evolution of male courtship signals," Taylor said. "If the female brain is permissive enough to render unnatural signals attractive, then random mutations in male signals can evolve. Certain new signal combinations would become acceptable to females, which would allow males to mate and pass along those traits."

But perhaps the most surprising aspect of Taylor's research is the finding that frogs respond to variations in audio-visual signals—somewhat analogous to human lip readers at noisy cocktail parties.

"In noisy environments, humans often rely on lip reading to improve speech comprehension," Taylor said. "Humans can, however, be fooled by changes in patterns of the speaker's lip movements—known as the 'McGurk Effect.' If you play a sound, but artificially change the way lips move, listeners hear a different sound—although the sound itself hasn't actually changed."

This demonstrates that the "human brain conducts a rather powerful integration of both sight and sound to generate our perceptions of speech," he noted. "Amazingly, frogs with substantially less sophisticated brains seem to conduct a similar type of audio-visual integration."

Taylor and his colleagues hope their work with frogs may help improve our understanding of how the human brain integrates multiple streams of sensory information to generate coherent perceptions of speech.

"The fact that frogs respond so strongly to variations in audio-visual cues suggests there may be some fundamental audio-visual processing that occurs in the vertebrate brain—meaning that frogs could provide a model system for better understanding audio-visual integration as it occurs in other animals, as well as humans," Taylor said.

Presentation #1aAB4, "Cross-modal integration and non-linear relationships: What can frogs tell us about solving cocktail party problems?" by Ryan C. Taylor will be at 9:00 a.m. ET on Monday May 5, 2014 in Ballroom B of the Rhode Island Convention Center.

ABOUT THE MEETINGThe 167th Meeting of the Acoustical Society of America (ASA) will be held May 5-9, 2014, at the Rhode Island Convention Center and Omni Providence Hotel. It will feature more than 1,100 presentations on sound and its applications in physics, engineering, and medicine.

PRESS REGISTRATIONReporters are invited to attend in person for free. If you are a reporter and would like to attend, contact Jennifer Lauren Lee ([email protected], 301-209-3099), who can also help with setting up interviews and obtaining images, sound clips, or background information.

WEBCASTA live media webcast featuring this and other newsworthy research presented at the ASA meeting will take place at 3:30 p.m. ET on Wednesday, May 7, 2014. Register and watch at: http://www.aipwebcasting.com 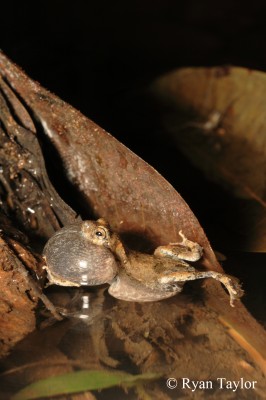 Caption: A male túngara frog calls while floating in a pond in the Panamanian rainforest. His inflated vocal sac is clearly visible. 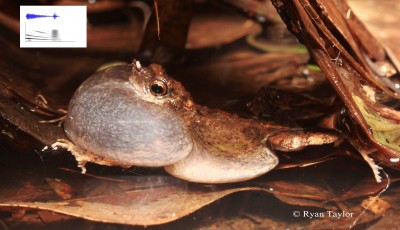 Caption: A male túngara frog calls, with his inflated vocal sac clearly visible. The inset is a waveform and spectrogram showing the two call notes that males normally make. The first note is a "whine," followed by a "chuck." 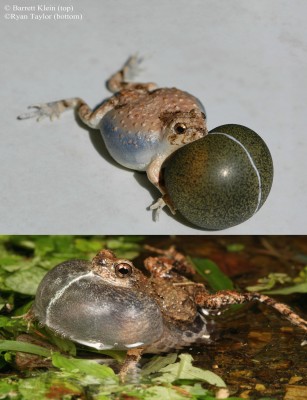 167th Meeting of the Acoustical Society of America