What goes on in the brain when it gets too hot? 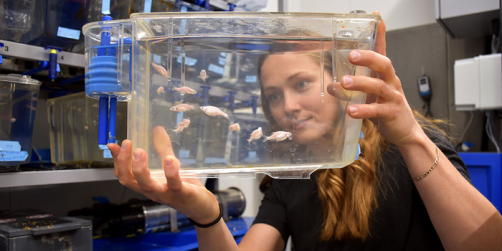 Newswise — “It was pretty incredible, actually. The whole brain lit up,” said Anna Andreassen, a PhD candidate at the Norwegian University of Science and Technology (NTNU).

Living organisms, be they fish or humans, tend to function less well as the temperature around them rises. This is something that many humans have probably experienced on a summer day that is a little too hot. But what exactly happens inside the body when the temperature gets uncomfortably warm?

Researchers at NTNU's Department of Biology have combined genetic technology and neurophysiological methods to find the answer.

“We wanted to look at the mechanisms that limit organisms' thermal tolerance. Which animals will survive when the Earth’s temperature increases due to climate change, and why? We chose to look at the brain,” says Andreassen.

Heat waves that sweep across continents are becoming more common, and animals that live in water are experiencing temperatures that are rising to lethal levels. Understanding what limits survival at extremely high temperatures is crucial to being able to predict how organisms will cope with climate change.

“Thermal tolerance is a topic that has been researched for decades, and the idea that temperature affects brain activity is an old one. What’s new is that we can now use genetic technology and neurophysiology to study the phenomenon,” says Andreassen.

At NTNU in Trondheim, researchers used newly hatched zebrafish larvae to study their brain activity while gradually increasing the temperature around the larval fish.

“These fish have been genetically modified so that the neurons in the brain give off fluorescent light when they’re active. We can see this light under a microscope while the larvae swim around. These larval fish also have the advantage that they’re transparent. We get to look directly into the brains of the living larvae,” says Andreassen.

In this way, the researchers can follow brain activity while gradually increasing the temperature of the water that the fish are swimming in.

“We can see how the larvae behave as it gets warmer. When it starts to get extremely warm, they lose their balance and start swimming around in circles, belly up.”

The researchers poked the fish larvae to check their response. They nudged the larvae’s tails, which normally triggers a swimming response.

But then, when they turned the temperature up a little more, something happened.

“At a certain temperature, the fish stopped reacting to the pokes. They were still alive, but in an ecological sense they could be considered dead. In that condition out in nature, they wouldn’t be able to swim away from predators or find their way to colder water,” says Andreassen, who adds that this condition is only temporary in the small experimental fish.

“They’re in just as good shape as soon as we get them into cooler water again,” says Andreassen.

Heat turns off the brain

So far, the experiments had gone as the researchers were expecting. By shining light in front of the fish's eyes, they could also check whether the brain was perceiving visual impressions. As the temperature rose, the brain completely stopped responding to stimuli and was completely inactive. But then, when they turned the temperature up a little more, something happened.

“The whole brain lit up. The closest I can come to describing what we saw was a kind of seizure,” says Andreassen.

[caption id="attachment_79120" align="alignright" width="327"] The photo shows how light spreads in the brain of a five-day-old larva when it is exposed to heat. Photo: Petter Hall[/caption]

Normally, you only see brain activity in the form of small spots of light in defined parts of the brain. Now the amazed researchers could observe under the microscope how the fluorescent light spread out within a few seconds and covered the entire brain of the small fish larva.

“We know that zebrafish brains have quite a lot in common with the human brain – 70 percent of the genetic material is the same – and researchers have speculated whether there could be a connection between what we saw in these fish larvae and what you see in the brains of children who have a fever,” says Andreassen.

Next, the researchers want to put a special type of brain cells– glial cells – under the microscope.

In order to take a closer look at what happened, the researchers in Trondheim began to manipulate the amount of oxygen in the water the fish were swimming in, while increasing the temperature.

“To our surprise, we found that the oxygen level played a part in controlling the thermal tolerance. When we added extra oxygen, the larval fish did better at high temperatures, had higher brain activity and also recovered faster from being exposed to upper thermal limits compared to the fish with low oxygen.

Studies of other species have yielded contrasting results when testing the effect of oxygen concentration on thermal tolerance.

“Being "insensitive" to fluctuations in oxygen levels could thus be an evolutionary advantage as the temperature on Earth rises.

“The findings show that thermal tolerance is something that varies between species. This could be a characteristic that determines whether a species is able to adapt to climate change or will succumb to rising temperatures. A lot of organisms live in oxygen-poor environments where temperatures can quickly become higher than normal. They’ll be especially vulnerable,” says Andreassen.

She gives as an example organisms that live in shallow freshwater areas, in rivers or in the intertidal zone.

Being "insensitive" to fluctuations in oxygen levels could thus be an evolutionary advantage as the temperature on Earth rises.

“Animals that manage to maintain nerve function under low oxygen levels might be the ones that will tolerate high temperatures best,” says Andreassen.