What Happened to Alaska’s Soils During the 2019 Fires? 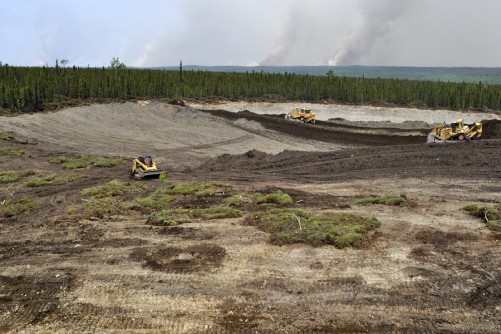 Kenai National Wildlife Refuge restoration work. The day after this photo was taken, we were evacuated from the site and not allowed to return for over a month as the fire rage on. What I found upon return was a little disheartening. 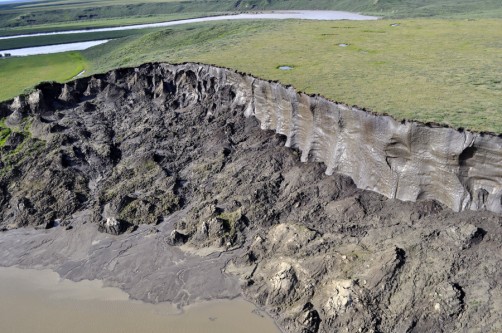 Thermokarst thaw slump. As the ground thaws and falls away, ice wedges in the ground are exposed. They are what look like vertical ridges. The exposed area then warms and thaws, and the cycle continues. 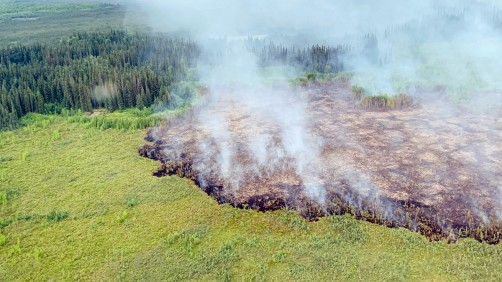 A heavy layer of moss protects much of the soil surface during a fire. There are changes, though. A lighter green surface reflects light, but the dark, charred surface absorbs light, and thus, more heat.

Newswise — March 2, 2020 – The summer of 2019 was the hottest and driest on record for Alaska. But instead of enjoying clear skies, people were choking on smoke. Alaska was on fire. The Soil Science Society of America’s (SSSA) March 1st Soils Matter blog explores how the fires affected the soils.

According to blogger Lorene Lynn, “Fire season began in April 2019, a full two months earlier than in the past. Fires burned 2.6 million acres in 2019, of which approximately 1.6 million were in interior Alaska where permafrost is prevalent.”

Due to growing concern over the release of carbon from thawing permafrost, one might ask how fire affects permafrost. It is a complex topic, and one that is not fully understood.

Many fires will burn the surface plants, but not penetrate through the deep moss, protecting the soil. Sometimes though, moss is lost and there is less insulation at the soil surface. It exposes the soil to greater thaw in the summer and a colder freeze in the winter.

“Shifts in vegetation community are common following fire,” says Lynn. “Over time, spruce will again move in and the permafrost returns to its previous temperatures.”

As our climate warms, some are concerned that large burned areas may not refreeze. This could lead to massive thawing and slumping of the permafrost, called thermokarst. This is already happening in the arctic, even where fire has not existed.

“In southcentral Alaska, I am working on a 35-acre restoration project,” explains Lynn. “Our work plan at the restoration site is shifting toward cultivation of plants from seed and cuttings to supplement the loss of native vegetation.”

“The forests will grow again. We just need to hope the permafrost will stay frozen,” says Lynn.

To learn more about what happened to Alaska's soils during the 2019 fires, read the entire blog post: https://soilsmatter.wordpress.com/2020/03/01/what-happened-to-alaskas-soils-during-the-2019-fires

Follow SSSA on Facebook at SSSA.soils, and Twitter at SSSA_Soils. SSSA has soils information on www.soils.org/about-soils, for teachers at www.soils4teachers.org, and for students through 12th grade, www.soils4kids.org.

The Soil Science Society of America is an international scientific and professional society with its headquarters in Madison, WI. Our members are dedicated to advancing the field of soil science in relation to food production, environmental quality, sustainability, waste management and wise land use. We work at universities, government research facilities and private businesses across the United States and the world.