What is a Polytechnic University?

Cal Poly Humboldt recently made the switch. Here's what that means. 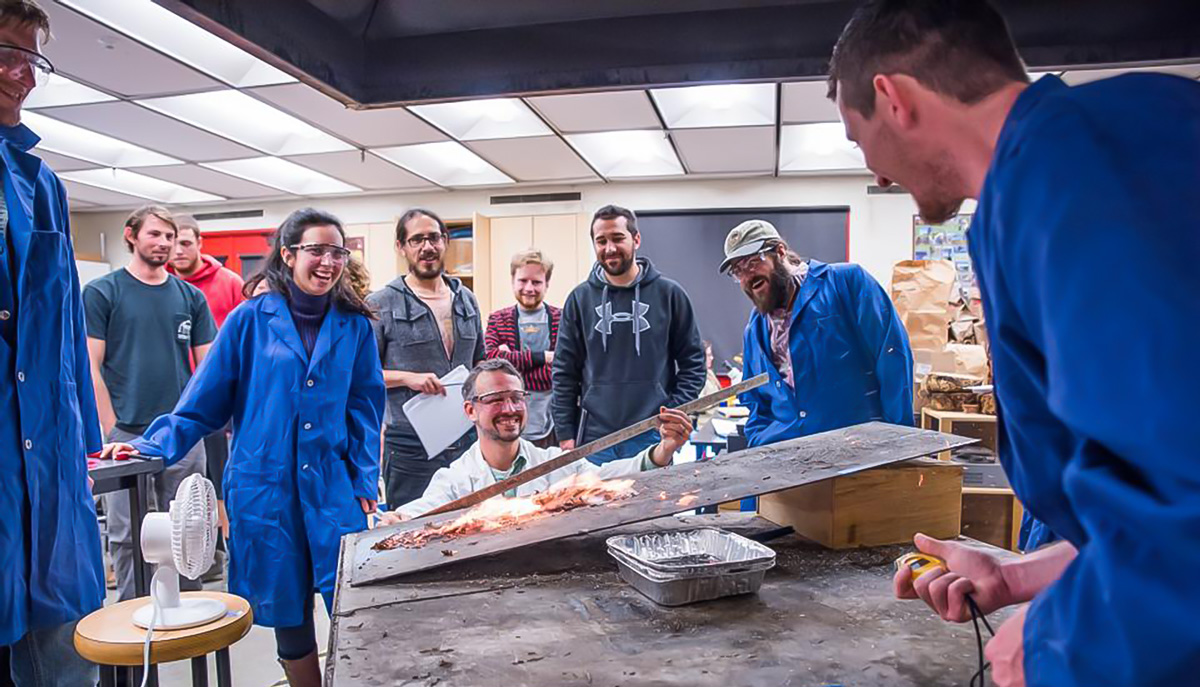 “As the CSU's third polytechnic university and the first in Northern California, Cal Poly Humboldt is a point of pride that will expand in-demand STEM opportunities for students across the state and help revitalize North Coast communities," Governor Newsom said in a press release.

A focus on applied learning is what sets a polytechnic university apart from a traditional university. Also known as experiential learning, it combines the in-depth study found at universities with practical, technology-based skills training. Polytechnic institutions specialize in STEM courses, providing students with hands-on learning and educational experiences in addition to a strong liberal arts foundation.

"There is a big focus on providing students with applied learning experiences that help them further their careers after graduation and connect them with potential employers," says Eileen Cashman, Ph.D., Cal Poly Humboldt environmental resources engineering professor and department chair.

As of 2020, Humboldt State had the highest percentage of science and natural resource majors in the CSU and the third highes​t percen​tage of STEM majors overall, only behind California State Polytechnic University, Pomona and California Polytechnic State University, San Luis Obispo. It also boasted the highest percentage of STEM students in the CSU who go on to earn doctoral degrees.

The campus is already home to innovative research facilities that address sustainability​ issues and other challenges the state faces, including the Schatz Energy Research Center, the Fire Resilience Institute​​​​, the Telonicher Marine Laboratory and Coral Sea—Humboldt's marine research vessel​.

"The polytechnic designation defines what we've been doing here in Humboldt for years for prospective students, their families and for employers," says Jenn Capps, Ph.D., Cal Poly Humboldt provost and vice president of Academic Affairs.

The university then held open forums and planning sessions that involved hundreds of faculty, students, staff, alumni, legislators and community members to gather feedback from stakeholders. The study helped identify the campus’s strengths and weaknesses, determined the viability of becoming a polytechnic institution and informed a prospe​ctus that eventually led to formal action by the CSU Board of Trustees​ in January 2022 to approve the designation.

Dr. Cashman, who co-led the initial self-study on academic studies, says the university considered student demand, connection to the workforce and the ability to leverage the region's unique strengths and address challenges it faces—like climate change, resiliency and environmental and social justice issues—when proposing new programs.

The campus ultimately recommended 12 new ​​programs to launch in fall 2023, and at least an additional 8 programs expected to launch by fall 2029. These include master’s, bachelor’s and certificate programs in areas like engineering, applied fire science, healthcare and more that will help fill workforce gaps locally, statewide and nationally, and help find solutions to California’s problems.

“We are offering academic programming that aligns with workforce gaps, which allows us to create access to high-demand programs that students are seeking to get into but can't,” says Capps, who oversees all academics at the university. “There’s such high demand for programs like software engineering and data science that they are impacted at other universities.”

Recruitment began earlier this year for faculty to teach programs launching in 2023 with the idea that they would join the university early to help build curriculum, recruit additional faculty and participate in student outreach.

“About 55 percent of the faculty we’re bringing on board are Black, Indigenous and people of color [BIPOC] who bring a diverse perspective to the classroom—that’s significant for us,” Capps says. “We attribute it, in part, to breaking down silos and supporting people to collaborate across disciplines.”

Incorporating sustainability practices and traditional ecological knowledge in the curriculum has been a growing focus of the Humboldt experience over the years. As the campus transitions to a polytechnic institution, it also remains committed to inclusive excellence and delivering a rich liberal arts education.

“We have really strong arts humanities programs, social sciences programs and music programs,” Capps says. “We are incorporating an interdisciplinary sort of approach to STEM education, where faculty are reaching across disciplines and figuring out how to bring elements of all of these things into academic programs. We are being open and recognizing that critical thinking, communication and the arts make a better engineer, scientist—you name it.”

Another distinctive component of a Humboldt education is the use of Place-Based Learning Communities (PBLCs) as a means of improving student retention and success. First-year students are grouped together by major and interest to learn as a cohort while they conduct research in their field and work in the community.

Cal Poly Humboldt already has nine PBLCs that offer students a built-in network of faculty and peers who help them navigate college life and increase their sense of belonging, which improves retention and aligns with the CSU’s Graduation Initiative 2025 goals.

"As we transition to a polytechnic, the goal is to have every single student—even transfer students—have that PBLC experience regardless of major, because involvement in that program has really correlated well with student success,” Capps says.​

As degree pathways expand, Humboldt is investing in programmatic growth as well as in modernizing existing facilities and building new infrastructure. Among the planned improvements​ are a new Engineering and Technology—Learning Community Building, a Microgrid and Sustainability Building and updates to existing buildings and labs and the campus's offsite marine facilities.

"Providing state-of-the-art facilities is meaningful for delivering quality education,” says Cal Poly Humboldt Associate Vice President of Facilities Management Mike Fisher. “It allows our students to understand what the world will have in store for them in private settings and helps build our workforce by having them learn how to use leading technology.”

All new buildings will be minimum-LEED Gold standard and will be fully electric, says Fisher. Cal Poly Humboldt is also developing a microgrid with a nearly three-megawatt solar array of generation and battery storage to make the campus more resilient. The Microgrid and Sustainability Building will serve as a place to study the microgrid, provide research opportunities for students and give sustainability a face and a home.

“We’re building the microgrid lab to be an experimental lab, but also to provide an educational gathering space for the public so they can walk through the technology,” Fisher says. “This building will represent what we do as a culture and as a campus towards leading sustainability.”

With enrollment expected to double in the next decade, the campus is preparing to spend more than $400 million on new student housing to accommodate the expected growth, including the Library Circle Housing, Health and Dining project. Fisher says the campus expects to have up to 12,000 full-time enrolled (FTE) students in nine years and aims to keep pace with this growth by supplying at least 50 percent of those students with university-managed housing.​

The infusion of money from the state will also help ensure student housing remains affordable. Traditionally in the state of California, housing for higher education has been funded by the state or by an institution's ability to take on debt through the issuance of bonds. Because of the debt-free capital from the state, the campus can afford to charge less for housing, or at least be competitive within the community.

“The investment of the state towards these endeavors directly impact the success of students,” Fisher says. “Lowering debt financing is the key to keeping student costs low.”

Though the current focus is on providing living spaces for undergraduate students, this opens up current living spaces to be used to provide housing for students with families as well as housing for faculty and staff.​

“The thing that's been the most exciting about this designation and sort of transformation is how literally the local community, the CSU and campus community, for the most part, got on the same page and really worked together to make this happen in an incredibly tight timeframe,” Capps says. “I really think that the secret sauce to it all was being open to invite everybody in to be able to participate.”

Cal Poly Humboldt is already the largest employer in the area and an economic driver for the region with an estimated annual economic impact of $459 million. The growth in enrollment and the development of new degree programs to fill workforce gaps will have a major impact on the North Coast economy, potentially revitalizing it for decades to come.

In addition to providing graduates to fill workforce gaps in the region, the university aims to strengthen relationships with the community through hands-on learning experiences that expose students to issues the region is facing and build skills that will help them further their careers.

The CSU Chancellor's Office has officially approved all 9 of the campus's first group of new degree programs. They will be entered into Cal State Apply, the CSU's online application portal, for the fall 2023 application cycle, which begins October 1, 2022.

Cal Poly Humboldt is currently undergoing a re-branding initiative​ to build awareness of its new polytechnic designation, improve its ability to compete on a national stage and inform long-term marketing communications efforts. The state legislature will be asked to incorporate the new name into legislation next year.

The campus is making progress on its first student housing project, preparing to conduct an environmental impact report and anticipates breaking ground in January 2023. It also acquired 16 acres of developable land​ in July to support any number of institutional priorities aligned with the polytechnic transformation.

To learn more about what's in store at Cal Poly Humboldt and to find the most up-to-date information, visit the polytechnic planning website.

Established in 1938 in San Dimas as the Voorhis Unit of Cal Poly San Luis Obispo, the campus relocated to Pomona in 1956, separated from the San Luis Obispo campus in 1966 and was granted university status in 1972.

Cal Poly Pomona awards more than 6,900 degrees each year—2,603 of which are in STEM fields—and serves more than 29,000 students annually​.

Cal Poly Pomona supports thousands of jobs in the Inland Empire and beyond and generates more than $1.1 billion in industry activity and more than $143 million in state and local tax revenue.

Established in 1901 as the California Polytechnic School, Cal Poly San Luis Obispo became part of the CSU in 1960 with the signing of the Donahoe Higher Education Act, which brought together all state colleges into one system.

Cal Poly San Luis Obispo awards more than 5,900 degrees each year—2,850 of which are in STEM fields—​and serves more than 22,000 students annually.

Cal Poly San Luis Obispo supports thousands of jobs on the Central Coast and beyond and generates more than $1.6 billion in industry activity and more than $105 million in state and local tax revenue.