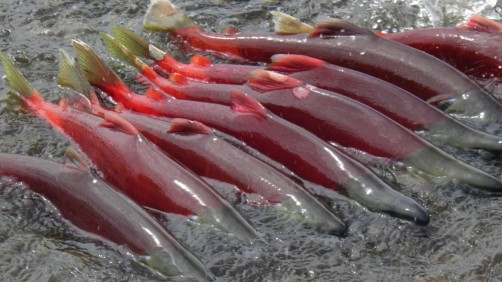 Newswise — The spring-fed water that flows through Hansen Creek in southwestern Alaska is almost always clear. Its rate and temperature stay relatively constant throughout the year. Each summer, sockeye salmon migrate through the shallow, narrow creek bed in distinct pulses, in a migration pattern common to salmon populations around the world.

Why the salmon move in pulses is the subject of a new paper published in Animal Behaviour.

“The folk wisdom is that the salmon are all independently cueing off common environmental cues, and that tends to synchronize their movements,” says co-author Andrew Berdahl, an Omidyar Fellow at the Santa Fe Institute. That trigger could be a change in tide or water temperature or the patterns of the moon.

But in Hansen Creek, where researchers have recorded the movement of salmon for the past 20 years, salmon arrive in pulses despite the very stable environmental conditions. Furthermore, existing models, which invoke environmental cues, don’t predict migration pulses very well. In the new paper, Berdahl and colleagues suggest that social cues might be the key to understanding the group migrations.

“Because you see this pulsed movement in places where standard explanations say you shouldn’t, it leaves us searching for another mechanism,” says Berdahl. “Maybe they’re cueing off each other.”