What Will California’s Strawberry Industry Do Without Methyl Bromide?

2016 is the final year for the soil fumigant to be used in California crop fields. 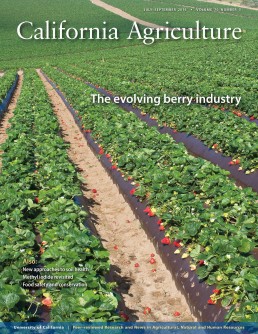 Newswise — For many years, California growers relied on methyl bromide to kill a wide range of soil-borne pests, from fungi to insects to weeds, before planting crops. 2016 marks the last year in which the highly effective soil fumigant will be available.

The University of California’s peer-reviewed journal California Agriculture examines the impact of the methyl bromide phaseout on strawberries, California’s third most valuable crop, behind only almonds and grapes, with annual farmgate sales of $2.5 billion.

First identified as an ozone-depleting compound in 1991, methyl bromide was scheduled for phaseout in the United States by 2005 under the Montreal Protocol, an international agreement to protect the stratospheric ozone layer.

While methyl bromide was used for many crops, California strawberry growers found it irreplaceable, which helped the industry win exemptions that have allowed a significant, though declining, quantity of the chemical to be used through 2016. Despite years of research into alternatives, no equally effective replacement has emerged.

Seven articles in the July-September issue of California Agriculture discuss methyl bromide alternatives and economic and production effects on the California strawberry industry.

In the first research article, UC Cooperative Extension advisors Laura Tourte and Mark Bolda and Karen Klonsky, emeritus UC Cooperative Extension economics specialist, review economic data on the berry sector — blackberries and raspberries as well as strawberries — in Santa Cruz and Monterey counties. They look ahead to factors, including water, consumer demands, labor, invasive pests, and the full phaseout of methyl bromide, that are likely to shape future growth.

In a paper chronicling events leading up to the 2012 withdrawal of methyl iodide, once promoted as a viable methyl bromide substitute, Julie Guthman, UC Santa Cruz professor in the Department of Social Sciences, reports survey findings that point to a variety of reasons why strawberry growers did not move quickly to adopt the chemical after it was approved by state regulators. Concerns about public opposition topped the list, followed by a variety of other factors, including concern about methyl iodide’s toxicity, and a lack of strong incentive to switch to the new chemical because of the availability of other fumigants, including methyl bromide.

“It now seems likely that no single measure will suffice to meet the challenge of soilborne pathogens,” write Margaret Lloyd, UC Cooperative Extension advisor, and Tom Gordon, UC Davis professor in the Department of Plant Pathology, in this issue’s Outlook. “Rather, a multi-faceted approach will be required, one that integrates advances in disease resistance through breeding with closer attention to the factors that influence the survival, activity and spread of pathogen populations in soil.” They make the case for using a suite of strategies to manage soilborne pathogens — including collective action among growers to help limit the spread of pathogens between fields.

A news item on research at the UC ANR Hansen Agricultural Research and Extension Center covers ongoing research on anaerobic soil disinfestation, a chemical-free technique that is being used in a growing number of commercial fields. Project scientist Amanda Hodson and UC Davis professor Edwin Lewis, both in the Department of Entomology and Nematology, review a variety of approaches to managing for soil health — in strawberries and other crops — as a pest suppression strategy.

Fumigants other than methyl bromide, such as chloropicrin, remain widely used in California strawberry production. Rachael Goodhue, UC Davis professor in the Department of Agricultural and Resource Economics at UC Davis, examines how increasingly stringent buffer zone requirements for chloropicrin application have an uneven impact on growers, depending on their proximity to developed land. In another article, a group of UC Cooperative Extension and U.S. Department of Agriculture scientists report on the effectiveness of several fumigants at dosages lower than the maximum label rate.Food safety and nutrient management on the farm

The issue also includes two research papers focused on general production practices for crops. One report discusses on-farm food safety practices based on a survey of produce growers. The researchers found that practices such as exclusion fencing and vegetation clearing, which may negatively impact wildlife, remain widespread despite a lack of clear evidence that they enhance food safety. Finally, Daniel Geisseler, UC Cooperative Extension specialist in the Department of Land, Air and Water Resources at UC Davis, and Gene Miyao, UC Cooperative Extension advisor, review the use of soil testing to guide the management of soil phosphorus and potassium in California cropping systems.

To read California Agriculture, a peer-reviewed journal of research in agricultural, human and natural resources published by UC Agriculture and Natural Resources, visit http://calag.ucanr.edu. For a free subscription, sign up on the website or write to [email protected].