What Will It Take to Protect Hospital Patients From UTIs? National Effort Shows Promise

27-May-2016 11:05 AM EDT, by Michigan Medicine - University of Michigan contact patient services
favorite_border 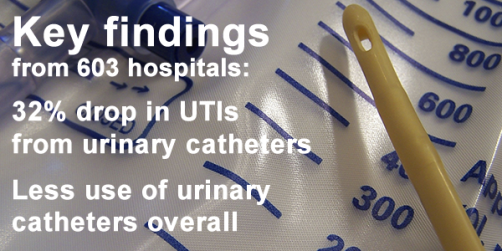 Key findings from the study of CAUTI prevention

Urinary catheter infection rates dropped at hospitals that used a toolkit of training, checklists and data in an AHRQ-funded study. Sarah Krein, Ph.D., R.N., one of the University of Michigan researchers involved in the study, explains the results.

Newswise — ANN ARBOR, Mich. — Right now, about one in five hospital patients has a catheter collecting their urine – and putting them at risk of a painful and potentially dangerous urinary tract infection, or UTI.

Many of them may not actually need a catheter. And none of them needs an infection. But both catheter use and UTI rates have stayed high despite years of national attention on the issue.

Now, new results from a large national effort show that it may be possible to both reduce catheter use and UTIs at the same time, saving money and suffering.

The findings come from a concerted effort in 603 hospitals that included training and tools for doctors and nurses, as well as data to tell them how their hospital units were doing.

By the end of the 18-month program, UTI rates among hospital patients in general wards had dropped by a third. Catheter use had dropped too. Intensive-care patients didn’t see a drop in either measure, suggesting that more work remains. During the same time as the program, hospital-acquired UTI rates rose nationwide.

The results are published in the New England Journal of Medicine by a large team funded by the federal Agency for Healthcare Research and Quality and coordinated by the Health Research and Educational Trust. The data come from the first four cohorts of hospitals that took part in the Comprehensive Unit-based Safety Program to reduce catheter-associated UTIs, also called On the CUSP: Stop CAUTI.

The paper’s first author, Sanjay Saint, M.D., MPH, calls the results very encouraging. “This program, in more than 10 percent of U.S. hospitals, shows we can make a difference in catheter-associated UTI rates and the use of catheters by addressing both technical and cultural aspects of healthcare,” he says. “There’s more work to be done, but all involved in this effort should take pride in knowing they helped move the needle on this important issue.”

Saint, who is the George Dock Professor of internal medicine at the University of Michigan Medical School and chief of medicine at the VA Ann Arbor Healthcare System, has studied catheter use and UTI prevention in hospital patients for two decades.

Based on that research, he and his colleagues helped develop and implement the toolkit used in the Stop CAUTI national effort. This included using tools and processes initially tested in hospitals across Michigan, through the Michigan Hospital Association’s Keystone Center for Patient Safety & Quality initiative.

Called the “bladder bundle”, it’s a combination of protocols, checklists, training modules, and data sharing practices that teams can tailor for use in their hospital unit. The tools encourage:

• Daily checks on which patients have a catheter and whether they need it • Less indwelling catheter use, by using other urine collection means • Training on urinary management for all care team members • Regular use of infection-prevention techniques for catheter placement and maintenance • Feedback to doctors and nurses about their unit’s catheter use and UTI rates • Coaching calls from regional leaders to share best practices and data

More about the findings

The effort described in the new paper was voluntary and non-random. In the end, data from 2011 to 2013 from 926 ICU and non-ICU hospital units in the first four cohorts was available to be analyzed. Nearly 60 percent of the units that took part were non-ICU medical and surgical wards. The hospitals were in 32 states, the District of Columbia and Puerto Rico.

The analysis revealed that:

• The rate of catheter-associated UTIs dropped from 2.40 per 1000 days of catheter use to 2.05, after differences in patients and hospitals were taken into account. This is a 14 percent overall drop. • Nearly all of the drop was due to changes in infection rates in non-ICUs, which went from 2.28 to 1.54 infections per 1,000 catheter-days – a drop of 32 percent. • In non-ICUs, the overall use of catheters went down from 20.1 percent of patients to 18.8 percent of patients. • ICUs didn’t see a substantial change in either measure, likely because the nature of patients treated in ICUs means more frequent monitoring and culturing of urine, so UTIs are more likely to be spotted. • There was no difference in UTI rates and catheter use between hospitals that completed the program and those that ended their data collection early.

Any hospital can now access the toolkit used in the study, via the AHRQ website. Meanwhile, AHRQ, HRET and U-M have gathered more data from On the CUSP: Stop CAUTI participating hospitals, including a number of emergency departments that joined in later cohorts.

The project was led by the Health Research & Educational Trust, an affiliate of the American Hospital Association, and its partners, the Michigan Health and Hospital Association Keystone Center for Patient Safety & Quality (MHA Keystone), St. John Hospital and Medical Center, the University of Michigan Health System, and the Johns Hopkins Medicine Armstrong Institute for Patient Safety and Quality, collectively referred to as the National Project Team (NPT). Additionally, the national project team collaborated with a number of organizations, including: Association for Professionals in Infection Control and Epidemiology, Emergency Nurses Association, Society for Healthcare Epidemiology of America, Society of Hospital Medicine and Society of Critical Care Medicine. The U-M/VA faculty and staff involved are M. Todd Greene, Ph.D., MPH, Sarah Krein, Ph.D., RN, Mary A.M. Rogers, Ph.D., David Ratz, MS, and Karen E. Fowler, MPH. All are part of the joint U-M/VA Patient Safety Enhancement Project, which has launched the website www.catheterout.org to help care teams understand alternatives to indwelling catheters and best practices for their use. Saint, Krein and Rogers are also members of the U-M Institute for Healthcare Policy and Innovation.