What You Don’t Know About Valley Fever Could Hurt You

CSU Bakersfield microbiology professor Antje Lauer says the state is tracking toward an epidemic of the infectious lung disease. 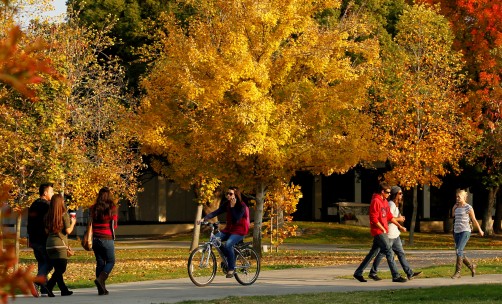 ​Leafblowers, construction and windy, dusty days release more of the cocci spores that cause Valley Fever into the air. Peak season for the disease runs from late summer to fall.

Newswise — Two decades ago, California had 719 reported cases of Valley Fever, an infectious lung disease caused by the fungus Coccidioides, which lives in soil. Since then, the incidence has climbed steadily, rising to 5,358 in 2016, according to statistics from the Centers for Disease Control (CDC).

But even those stats don't tell the full picture, says Antje Lauer, Ph.D., a professor of microbiology at California State University, Bakersfield, and a leading Valley Fever researcher.  "That's just the tip of the iceberg," she says. "This is a very misdiagnosed and underdiagnosed disease. The actual number of cases is likely 10 times as high."

We're facing, Dr. Lauer says, an epidemic, and one that's likely to keep getting worse.

People who grew up in places where Valley Fever is common, such as the San Joaquin and Central Valleys of California and parts of Arizona, may have a family member or know of a neighbor who was diagnosed with the illness. Many have likely also developed immunity to the fungus.

But most others, including students who attend schools in these regions or regularly visit, may never have heard of Valley Fever, much less know enough to protect their health

In a recent conversation, Lauer filled us in on the fundamentals.

The majority of people infected with Valley Fever either have no symptoms or experience common symptoms like cough, headache, joint pain and night sweats that are similar to a cold or the flu. Some may develop a rash.

It's easy to dismiss these symptoms, even if they linger for weeks or months. For many, the symptoms will disappear on their own.

But for some, untreated Valley Fever can lead to chronic fatigue, severe weight loss, pneumonia, meningitis or even death. Some strains of Coccidioides, or cocci, for short, are more dangerous than others.

If you have a weakened immune system from HIV/AIDS, diabetes, and other conditions, you may be more vulnerable to the severe forms of the disease. Certain ethnicities, including African-Americans and Filipinos, also seem to be at higher risk for complications.

Valley Fever can be diagnosed through a blood test or a skin prick test, similar to what's used to detect allergies. People may need to be their own advocate in suggesting these tests. "Don't assume that your physician is well-informed about Valley Fever," Lauer says. "As a patient, you may need to bring it up yourself."

Why Valley Fever is On the Rise

Left undisturbed in the soil, the cocci fungus doesn't pose a risk to our health. It's when the microscopic spores become airborne and are inhaled that infection begins.

That's happening more often because of a number of factors, Lauer says. For one, climate change is leading to hotter, drier weather and that means dustier soil that's easier to breathe in.

As the Central Valley experiences a population boom, more people are being exposed to the Valley Fever fungus. And as more building takes place to house these newcomers, soil where the spores thrive is being displaced at construction sites.

What This Means for You

People don't take Valley Fever seriously until it hits them, Lauer says. The risk is closer than many people may believe. "We've investigated soil on the Bakersfield campus and found pathogens in some areas," she says.

Lauer suggests runners and walkers take their workouts indoors, or at the least don a protective mask, on windy, dusty days during Valley Fever season, which runs from late summer to fall.

She'd also like to see a reduction in the use of leaf-blowers on campus, and construction sites in the region should take precautions against cocci spores being released into the air as well as implement measures to protect workers. And, because dogs, especially those that like to dig around, are also susceptible to Valley Fever, you can learn how to protect Rover.

Most of all, Lauer believes it's important for Californians to educate themselves about Valley Fever. The Kern County Public Health Services Department, CDC and Valley Fever Center for Excellence all have up-to-date information on risk factors, diagnosis and treatment.