What You Need to Know Before Joining a Corporate Board

18-May-2017 1:05 PM EDT, by University of Virginia Darden School of Business
favorite_border 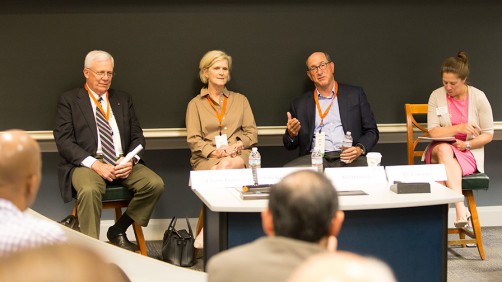 Newswise — The caricature of the corporate board of directors as a clubhouse refuge of former and fellow executives who serve as little more than a rubber stamp has little resemblance to current reality.

According to a recent panel of University of Virginia Darden School of Business alumni who are veteran board members, today’s boards operate in an environment of intense scrutiny, and responsible board members treat their governance role with the utmost seriousness.

Given the time requirements and ever-present threat of litigation, panelists said would-be board members should consider the full weight of their responsibilities and commitment to the company or cause before agreeing to the job.

Robling was joined on the panel hosted at the Darden School by former Medtronic Chairman and CEO Bill Hawkins (MBA ’82) and former LandAmerica Financial Group Chairman and CEO Charles Foster (MBA ’67), a veteran of a number of boards.

When considering opportunities, Hawkins said he firsts asks himself whether he’ll be able to contribute meaningfully and whether he has personal interest in the enterprise’s area. The expected chemistry with fellow board members and corporate leaders, especially the CEO, must also be considered, he said.

“The CEO sets the tone for the enterprise in terms of transparency,” Hawkins said. “If you have concerns about the CEO, it raises questions.”

In addition to a number of publicly traded and venture or private equity-backed companies, Hawkins serves on various nonprofit and academic boards.

Foster advised considering a board seat as one would consider an M&A transaction, talking to sources close to the matter and conducting sufficient due diligence to gain comfort in a decision.

“Talk to the general counsel of the company about their board practices,” Foster said. “If you are lucky enough to get invited to sit on your first board, that’s the way I’d approach it.”

Said Robling: “You very much have your reputation and competency on the line in terms of companies you choose to work with. It’s like your mother used to say: be careful of the company you keep.”

Despite the workload and occasional headaches, the panelists made clear that they wouldn’t sit on boards if they didn’t ultimately appreciate the process.

Robling said she has been particularly drawn to venture-backed companies, and currently derives a great deal of fulfillment from her work as nonexecutive chairman with Plated, a company in the meal-kit delivery space that builds upon her corporate experience with companies such as Pinnacle Foods Corp., Campbell’s and Kraft Foods.

Hawkins (MBA ’82) jokingly used the analogy of parenthood versus grandparenthood to draw the difference between serving as a corporate leader versus a board member.

Serving as a CEO, like being a parent, is a full-time, 24/7 job. Serving on a board is more akin to grandparent status, and while you have a deep connection to the subject, “you see them four or five times a year, give good advice and go home.”

The panelists warned that previous business leaders can sometimes have a hard time making the transition to an advisory role, with operators often stuck in operator mode.

“The ultimate responsibility of a board is governance with a view from a higher level, not the details of management,” Foster said. “This is one of the critical things you have to get right as a board member.”

As to what goes into an effective board meeting, Robling said the most important step was showing up, noting that she had never missed a board meeting and had no intention of ever doing so.

Hawkins advised that management not “PowerPoint the board to death,” suggesting that effective meetings often involve a fair amount of prereading, with the meeting itself taking the form of management framing select questions where they would benefit from discussion and guidance from a board.

The board panel was one of many talks, panels and case discussions held during Darden’s 2017 Reunion Weekend, with sessions devoted to career transitions, effectuation, financial innovation and entrepreneurship, among other topics.

At a session featuring a number of veteran Darden entrepreneurs moderated by Professor Greg Fairchild, Michael Meyer (MBA ’92) described the various entrepreneurial hats he had worn in his career, from banker to owner of a chain of boutique grocery stores to his current perch as a partner with the venture capital firm Middlegame Ventures and board member of a number of companies.

Meyer, who credited Darden with cramming 10 years of experience into two years of study, recounted his experience growing Marvelous Market into a small chain of prepared food providers in the Washington, D.C., area, as well as his experience with entrepreneurs as a venture capitalist.

“Entrepreneurship is really fun, but it’s not easy,” Meyer said. “You have to be able to take a punch in the face at least once a week.”

As he meets with would-be entrepreneurs in his current position, Meyer said he’s routinely taken aback by the number who have never actually spoken to a potential customer.

The Darden entrepreneurial curriculum and the i.Lab incubator program, with its emphasis on design thinking, effectuation and agile, typically puts budding entrepreneurs in close contact with prospective customers in the early stages of idea creation, which helps address such challenges.