When a City Gets Too Smart…

The Smart Bench in Action. 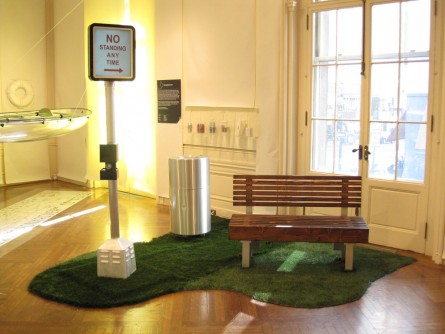 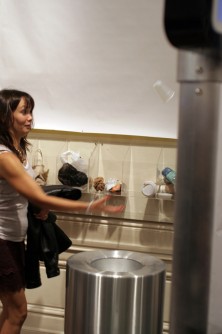 The Smart Trashcan allows you to throw only the right kinds of trash in it. It shows its displeasure by spitting out the trash it deems unworthy. 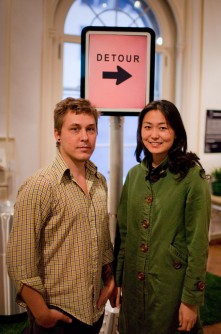 The artists, David Jimison and JooYoun Peak, stand in front of the Smart Sign.

Newswise — David Jimison, Ph.D. candidate in Digital Media at Georgia Tech, is exhibiting his much-talked about piece “Too Smart City” as part of the “Toward the Sentient City” exhibition at The Urban Center in New York City.

Jimison’s piece features three pieces of street furniture that come to life when used. The Smart Bench throws off people who’ve been lounging too long. The Smart Trashcan only accepts the right kind of trash. All other trash gets tossed back at you. The Smart Sign addresses passers-by with the latest legal codes. All are examples of technological solutions run amok.

The exhibit is curated by Mark Shepard and organized by the Architectural League of New York. The show runs until November 7. Jimison created the piece with independent artist JooYoun Paek and engineer Daniel Bauen, a Georgia Tech alumnus.

I recently sat down with Jimison to talk about the piece and the reactions it’s been getting.

David Terraso: So, how many pieces do you have?

David Jimison: I have three pieces, three sort of furniture that are all one piece. So I have a sign, a trashcan and a bench. And together, we have them on this fake grass. It sort of evokes the city park of the future. And each of those is intended to be very much an everyday object. People can see everyday objects, and first associate them as something you’d see all the time, but then they do these unusual things that hopefully raise awareness about how technology could potentially be used or malfunction in a city of the future.

DT: What do you hope people take home from seeing your piece?

David Jimison: I hope they take home an awareness of this move toward the Sentient City and what that might mean for themselves and their everyday lives. But also, the pieces we chose were meant to evoke a greater awareness about furniture in our contemporary lives. And how benches are already designed to restrict people from lying down.

There’s been interesting backlash already. For instance on one of the blogs, people are saying this bench is terrible, it’s going to hurt their grandmother, and how could people invent something like this?

DT: They know it’s a work of art, right?

David Jimison: Well, some people aren’t quite sure. Some people get the sarcastic element. We tried to balance it in a way that it left a little bit of anxiety, and in a sense I think that was a high-five moment for us as developers. We wanted to try to create this playful work of art that does leave this bit of anxiety about the future.

I think that there’s been another question of, “Well, would you sell this to city planners?” Because they might want to have benches close at night. It’s just at that line, where it’s not so far off that you couldn’t imagine it at an airport or someplace, but that it’s new and novel enough that you don’t take it for granted and you do kind of question it, and say “I don’t want that. I don’t like that.” So that’s what we’re trying to create.

DT: I can imagine you put a quarter in and it gives you five minutes on the bench and then it pops up.

David Jimison: Yes, of course, of course. And as an aside, I think that as a technologist who works on commercial work and artwork, what’s nice about being supported in the art field is that you get to do things that are supposed to be broken, aren’t supposed to succeed. And that of course helps me in my commercial work, but it’s a different space to play in.

DT: What kind of reaction were you going for?

David Jimison: I guess the kind of reaction we were hoping for was an awkward laugh. It’s comedic and it’s fun, but it also makes people take a step back and it causes a little bit of reflection.

DT: What brought your interest to this particular topic?

David Jimison: My research at Georgia Tech is directly in line with thinking about pervasive technologies and mobile technologies and how they’re going to relate to urbanism of the everyday. So for me it was a direct correlation of all the things I’ve been studying and building while at Tech.

DT: Would you say you’re the kind of person who likes to have a bit of an edge to your work?

David Jimison: Yes, I would say that, even just working in the cultural sphere. I’ve had grants here at Georgia Tech from Nokia and MTV, and I think that edge is important because it keeps people talking about it. Edge means relevant or important in a lot of ways, so I think that’s an important aspect.