When Fish Come to School, Kids Get Hooked on Science

A program that brings live fish into classrooms to teach the fundamentals of biology not only helps students learn, but improves their excitement about and interest in science. 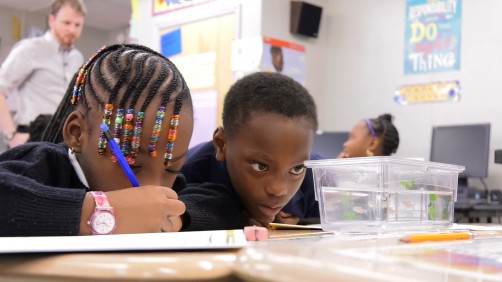 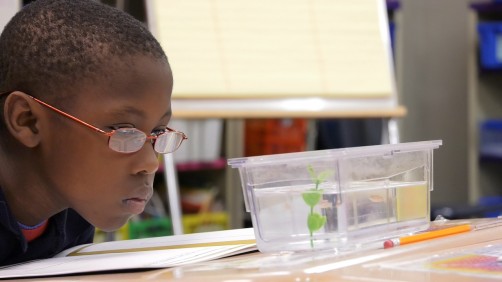 A third-grader at Baltimore’s Thomas Jefferson Elementary Middle School observes his zebrafish as part of his BioEYES curriculum. 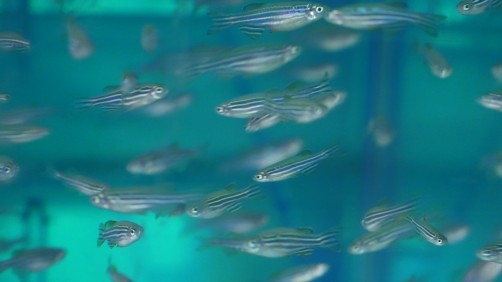 When Fish Come to School, Kids Get Hooked on Science

Newswise — A program that brings live fish into classrooms to teach the fundamentals of biology not only helps students learn, but improves their attitudes about science, a new study finds.

The study of nearly 20,000 K-12 students, who raised zebrafish from embryos over the course of a week, found that kids at all grade levels showed significant learning gains. They also responded more positively to statements such as “I know what it’s like to be a scientist.” The results, to be published by the journal PLOS Biology, suggest that an immersive experience with a living creature can be a particularly successful strategy to engage young people in science, technology, engineering and math.

Co-author Steven A. Farber is a biologist who is a principal investigator at the Carnegie Institution for Science and a Johns Hopkins University adjunct associate professor in the Department of Biology and in the School of Education. He founded BioEYES in 2002 with co-author Jamie R. Shuda, director of life science education at the University of Pennsylvania and an adjunct associate professor at the Johns Hopkins School of Education. Intended to reach low-income schools with students who are primarily from underrepresented minorities, BioEYES is now a partnership between the Carnegie Institution and Johns Hopkins that has worked with 100,000 students in Baltimore, Philadelphia and other cities.

During the course, students collect zebrafish embryos and watch them develop from single cells to swimming larvae complete with beating hearts and distinct pigmentation. Elementary students learn about human and fish anatomy, habitats, cells, and DNA. Middle school students identify observable traits of zebrafish offspring, and, in high school, students learn how scientists determine the genetic makeup of parents by studying their offspring. By the end of the week, all students are analyzing data and discussing results like real scientists.

“The kids can’t wait for a chance to look at their fish – they’re natural scientists,” Farber said. “They’re so focused on the experiments, it doesn’t feel like school.”

The authors analyzed the performance of 19,463 students who participated in BioEYES from 2010 to 2015. Before and after the program, students were asked knowledge-based questions and questions to assess their attitude about science.

The results suggest students are particularly able to grasp concepts – even complex ones – when they’re delivered through an authentic, hands-on experience, the authors say. Farber also says the chance to work with live animals — fish that swim, mate and grow right before their eyes — focuses children’s attention in a way a book lesson can’t.

After the program, students were more positive about who scientists are, the importance of science and the popularity of science. The attitudes of elementary students changed the most, with improvement in six of 11 statements.

The statement that generated the most positive change for all of the students was, “I know what it’s like to be a scientist.”

“We’re showing that BioEYES allows children to imagine themselves as scientists and that’s really important for us,” Farber says. “We’re changing attitudes and developing a more STEM literate citizenry.”

BioEYES operates in 104 schools in the United States and 25 in Australia. In Baltimore, the program runs in 45 schools (36 of them Baltimore City public schools), reaching more than 4,000 students a year. The program is taught by classroom teachers who train alongside educators from the Carnegie Institution and universities, as well as by “model teachers” who train with BioEYES staff for three years before running the program on their own.

At Baltimore’s Thomas Jefferson Elementary Middle, third-grade students who were given male and female zebrafish one day this fall were amazed, just 24 hours later, to see embryos form, and thrilled to observe the growing life forms under a microscope.

“You see a whole different side of them when they’re learning something that’s real,” said Kelley Taylor, their teacher. “I have some bright students in here, and they are definitely making the connection that scientists are changing people’s lives.”