When Your Brain Talks, Your Muscles Don't Always Listen 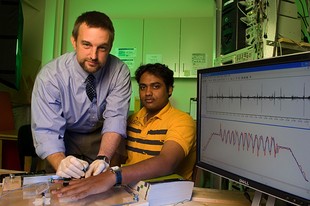 University of Delaware scientist Christopher Knight (left) and graduate student Dhiraj Poojari are examining the nerves and muscles of the index finger to shed light on how our motor-control system, which rules movement, changes as we age.

Newswise — Have your neurons been shouting at your muscles again? It happens, you know.

As we grow older, neurons--the nerve cells that deliver commands from our brains--have to "speak" more loudly to get the attention of our muscles to move, according to University of Delaware researcher Christopher Knight, an assistant professor in UD's College of Health Sciences.

"As a result of age-related changes in muscle and neurons, elderly people are often frustrated by poor control during precision tasks, and slowed physical responses contribute to more falls as people grow older," Knight said.

Knight and co-author Gary Kamen, who directs the Exercise Neuroscience Laboratory at the University of Massachusetts, recently published the results of a study on motor-unit firing rates in the Journal of Applied Physiology, and Knight is now beginning a new project focusing on motor-control mechanisms in the elderly. Both studies are sponsored by the National Institutes of Health.

The ultimate goal of the research, Knight said, is to improve movement quality in older adults, as well as patients with disorders such as cerebral palsy or multiple sclerosis, or who are recovering from strokes.

Every move you make is made possible through a miraculous communications network involving the brain at the command center, the spinal cord, billions upon billions of nerve cells, and thousands of muscle fibers.

"Muscles are the driving force behind our movements," Knight said. "Every time they get a command from the neurons, the muscle fibers contract. In the generation of muscular force, the smallest controllable unit consists of an individual neuron and the muscle fibers it stimulates. We believe that our research is very important to our understanding of motor-control mechanisms in general and impaired control in patient populations."

Shedding light on the communication between neurons and muscles, and how it changes as we age, may lie right at our fingertips, according to Knight's research.

Using an experimental apparatus he and his students created in UD's Human Performance Lab, Knight has been examining muscular force on a very small scale in the index finger, specifically, the first dorsal interosseous muscle. Located between the index finger and the thumb, this muscle contains 120 "motor units" --in other words, 120 individual neurons, or nerve cells, and the muscle fibers they activate.

"It's a relatively simple muscle, so you get to see more of a one-to-one relationship between the activity of the neurons and the resulting muscular force," Knight said.

Twenty-three subjects, ranging from 18 to 88 years of age, participated in Knight's recent study.

In a virtually painless procedure, a small needle-like electrode with four tiny wires was embedded in the muscle of an index finger of each subject. The electrode was hooked up to a computer to record the electrical impulses as they travel from neurons to the muscle fibers.

As the index finger was held steady in a small harness, each subject was asked to use the finger to follow the outline of a sinusoidal curve, with its peaks and valleys, on a computer screen.

"More force--which is indicated by a corresponding higher firing rate of neurons--is exerted just before you begin the upturn toward one peak and then it eases off again in the downturn toward a valley," Knight noted.

Once recordings were completed at one site in the muscle, the electrode was repositioned to sample from other motor units within the muscle.

Knight and graduate student Dhiraj Poojari and undergraduate researchers Maria Bellumori and Christopher Martens then analyzed the firing-rate data for frequency and amplitude in a tedious process that Knight hopes to automate in the future through the ongoing development of a software program that will help sort out the bang-bang-like "doublets," the brief periods when the neurons fire faster, from slower periods of activity.

The results showed lower firing rates among older subjects versus younger subjects--a diminished ability of the muscle fibers to "hear" and respond to the neurons' commands.

"The repeated contraction of muscles is essential to movements such as walking," Knight said. "However, our muscles have a reduced capacity to contract or 'twitch' as we grow older. We lose fast-twitch muscle fibers as we age."

However, there are steps we can take to preserve this critical motor capacity, according to Knight.

"After power training with weights, we see an increase in firing rates," Knight said. "For safety, we're commonly advised to do things slowly when exercising, but it's important to also do some fast exercises. You need a fast movement to prevent a fall. Even in the frail elderly, it is possible to use exercise bands for manual resistance to improve the speed of movement."

Knight has always been interested in how the body adapts to exercise. When he entered college years ago, his goal was to become an elite track-and-field athlete. While he competed well, he realized that his dreams lay elsewhere, and his attention focused full force on academics.

At the University of Connecticut, a class on the biology of the brain introduced him to the nervous system and movement, and he was hooked. His interests were further piqued during a summer research experience, where he had the opportunity to work with wheelchair athletes.

"People with severe spinal cord injuries have limited cooling because they can't perspire below the site of injury," Knight said, "so their core body temperature can reach dangerous levels."

In graduate school, he decided to pursue motor control research, and he's never looked back.

"My early interests were based on sport, but my career in this field now allows me to address a much larger population that needs our knowledge," Knight said. "Exercise is still the means for improvement, and aging is a process that unites us all."