Where Are the Hoverboards? Ithaca College Professor Says Not Too Far Off

Where are the hoverboards Back To The Future 2 promised? 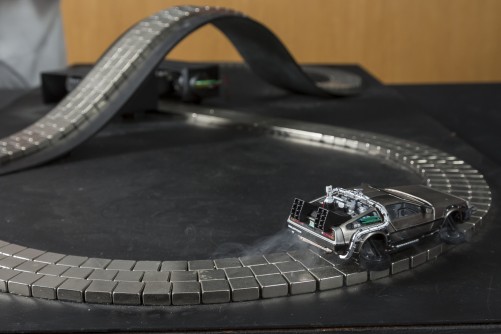 Newswise — ITHACA, NY — Thought you’d celebrate the real Back to the Future Day with a ride on your hoverboard or in your flying car? Sadly, that’s not going to happen in time for Wednesday; but the levitating technology Marty McFly encountered in his jaunt through Oct. 21, 2015 during the 1989 film “Back to the Future II” isn’t as far-fetched as it might seem.

It might not be too far off, either, thanks to the science of superconductivity.

"We're probably closer to being able to create a transportation system that's levitating than we are to creating personal automobiles that can both fly and drive,” said Matthew C. Sullivan, an associate professor in the Department of Physics and Astronomy at Ithaca College. He’s spent his career studying the phenomena of superconductors.

Superconductors are materials — an element, metal alloy, or even certain ceramics — that display unique magnetic and electrical properties when cooled to extremely low temperatures (some near absolute zero, or about -452 degrees Fahrenheit, others as “high” as -292 F, and most between that range). When properly cooled, a superconductor will resist magnetic attraction and actually float above a magnet.

Sounds like the hoverboard Michael J. Fox’s character tooled around Hill Valley with, right? Though the hover technology in the fictional time-travel series is never detailed, it would be entirely feasible, if unlikely, with technology today, Sullivan said – as long as there were a lot of properly cooled superconductors in our rides and magnets in our roads, or vice versa.

“The only thing that seems a little crazy at this time is being able to hover over any particular surface that you want. That I'm not clear on how we would do,” he said.

Earlier this year, engineers from automaker Lexus hit social media gold with videos and commercials showing off their Slide hoverboard, which makes use of superconductors but can only be ridden in their specialized skate park in Spain.

Sullivan’s own demonstrations, in which he sends a small puck made of superconducting material around a track made of magnets, are smaller in scale but no less impressive. He was even featured on “The Colbert Report” in 2011 levitating a carton of Stephen Colbert’s Americone Dream ice cream and on the Travel Channel in 2013 talking about possibilities for future roller coasters.

Superconductivity lends itself to much more than flashy demonstrations and sci-fi dreams of levitated transport, though, and has practical applications already in use in todays’ technology. Some of the mag-lev (magnetic levitation) train systems online throughout the world make use of the technology, as well as the magnets in magnetic resonance imaging (MRI) machines and in particle accelerators such as the Large Hadron Collider in Switzerland, where the Higgs boson particle was confirmed in 2012.

Another property of superconductors is that they provide no resistance to electrical current, which means there is no loss in power as electricity flows through them. Though superconductors are currently utilized in limited commercial capacity in cell phone towers and electrical transmission cables and wires, the extremely low temperatures needed to maintain superconductivity limits their use.

“That's what my lab is trying to do: Add a small piece to this puzzle of trying to understand how these materials actually can superconduct, because they defy the logic that was understood back in the 1950s," Sullivan said.

Sullivan and his students are focused on learning about the mechanisms that allow for materials to transition from a normal state to a superconducting one. The ultimate goal, he said, would be to discover a material that transitions at much higher temperatures.