Where the Rains Come From 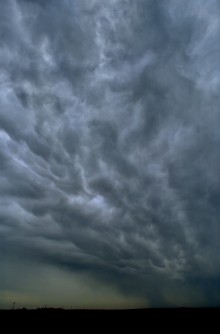 Multiple storm systems converge over the Great Plains into immense thunderstorms that bring much of the spring rainfall.

Newswise — RICHLAND, Wash. -- Intense storms have become more frequent and longer-lasting in the Great Plains and Midwest in the last 35 years. What has fueled these storms? The temperature difference between the Southern Great Plains and the Atlantic Ocean produces winds that carry moisture from the Gulf of Mexico to the Great Plains, according to a recent study in Nature Communications.

"These storms are impressive," said atmospheric scientist Zhe Feng at the Department of Energy's Pacific Northwest National Laboratory. "A storm can span the entire state of Oklahoma and last 24 hours as it propagates eastward from the Rocky Mountain foothills across the Great Plains, producing heavy rain along the way."

Understanding how storms changed in the past is an important step towards projecting future changes. The largest storms, especially, have been challenging to simulate.

"These storms bring well over half of the rain received in the central U.S. in the spring and summer," said atmospheric scientist Ruby Leung, a coauthor with Feng and others at PNNL. "But almost no climate model can simulate these storms. Even though these storms are big enough for the models to capture, they are more complicated than the smaller isolated thunderstorms or the larger frontal rainstorms that models are wired to produce."

Previous research had found more heavy springtime rain falling in the central United States in recent decades, but scientists did not know what types of storms were causing the increase. Different storm types might respond in their own unique ways as the climate warms, so the PNNL researchers set out to find out.

To do so, the team worked out a way to identify storms called mesoscale convective systems. This type of storm develops from smaller convective storms that aggregate to form the largest type of convective storms on Earth. They are best detected using satellites with a bird’s eye view from space. Feng transformed well-established satellite detection methods into a new technique that he then applied to rainfall measured by radars and rain gauges for the past 35 years. This allowed the researchers to identify thousands of the large convective storms and their rainfall east of the Rocky Mountains.

The results showed the frequency of very long-lasting ones increased by about 4 percent per decade, most notably in the northern half of the central region -- just below the Great Lakes. The researchers rated the storms that produced the top five percent of rainfall as extreme events and saw that extreme events have become more frequent in the last 35 years.

But what contributes to the changes in the frequency and characteristics of mesoscale convective systems? To find out, the researchers analyzed the region's meteorological environment. They found that the Southern Great Plains warms more than the ocean does.

This difference in temperature creates a pressure gradient between the Rocky Mountains and the Atlantic Ocean that induces stronger winds that push moisture up from the Gulf of Mexico. The warmer and moister air converge in the Northern Great Plains, where it falls in massive storms.

Although these storms are occurring more often and producing heavier rainfall, whether they turn into floods depends on the details.

"Flooding depends not only on precipitation intensity and duration, but also how much water the ground can hold," said Leung. "Teasing out whether the observed changes in rain have led to increased flooding is complicated by reservoirs and land use. Both have the ability to modulate soil moisture and streamflow, hence flooding."

This work was supported by the Department of Energy Office of Science.