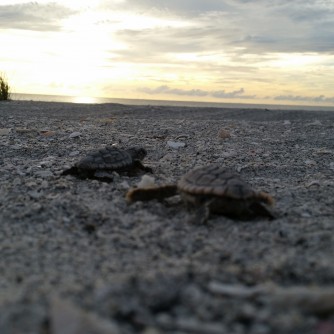 Newly-hatched loggerhead sea turtles on the beach at sundown on Sanibel Island in southwest Florida.

Newswise — Who’s your daddy? No, it’s not a TV clip from “The Jerry Springer Show” to identify who the “real” father is. Rather, it is a groundbreaking study of sea turtle nests and hatchlings using paternity tests to uncover “who are your daddies?”

The study conducted by researchers at Florida Atlantic University and published in PLOS One, is the first to document multiple paternity in loggerhead sea turtle nests in southwest Florida. What started out as a study on female sea turtle promiscuity – females can have multiple partners and can store sperm for more than three months after mating events – is proving to be very good news for this female-biased species facing rising risks of extinction due to climate change.

Due to their accessibility, nesting female sea turtles, nest success, and hatchlings are frequently examined and used for demographic studies and population models (key areas for the management of imperiled species). Yet, there is very limited understanding of the proportion of adult males and males approaching sexual maturity in any sea turtle population. Consequently, male sea turtles’ reproductive behavior is poorly understood and adult sex ratio cannot be estimated directly.

“Studying sex ratios of adult sea turtles in the ocean is logistically difficult because they are widely distributed and males are especially difficult to access because they rarely come to land,” said Jacob Lasala, corresponding author of the study and a Ph.D. student working with Jeanette Wyneken, Ph.D., co-author and a professor in the Department of Biological Sciences at FAU’s Charles E. Schmidt College of Science. “We decided to use a different approach and measure ‘breeding sex ratios’ using genotyping to examine the number of male sea turtles that contribute to nests.”

The researchers identified the paternity of 51 nests and 989 sea turtle hatchlings along the eastern Gulf of Mexico on Sanibel Island in Florida over the course of three nesting seasons (2013 to 2015). Because there are fewer male sea turtles and sea turtle populations have been female-biased, the researchers expected to find the same male sea turtles showing up as fathers in different nests across hundreds of hatchlings sampled in their study. Much to their surprise, and relief, that did not happen.

The researchers found that 70 percent of the nests and hatchlings they analyzed in their study had different fathers. They also did not find any repeat males in any of the nests, and identified the genotypes of 126 distinct males. No male loggerhead sea turtle fertilized eggs in more than one nest within or across years. The breeding sex ratio was approximately 1 female for every 2.5 males. These findings suggest that several males contribute to multiple nests during a nesting season and might breed more frequently than females.

Breeding sex ratio is the proportion of males and females that can mate at any time; the metric can be used to identify the minimum number of males and females contributing to populations. A single female can have offspring from more than one male in a nest within a year. The number of males fathering each nest can be determined genetically and used to estimate the minimum breeding sex ratios.

For the study, Lasala, Wyneken and Colin R. Hughes, Ph.D., study co-author and an associate professor in FAU’s Charles E. Schmidt College of Science, genotyped the nests and hatchlings using seven polymorphic microsatellite markers to estimate the breeding sex ratios of these loggerhead turtles. Paternal genotypes were identified through exclusion analysis and were used to estimate the number of males contributing to this population. Results of their study also provide an alternative hypothesis of loggerhead breeding.

By sampling turtles over three years, the researchers were able to estimate the population breeding sex ratios independent of the complications created by females nesting every second or third year, and males breeding every year.

“Our study presents baseline results against which those future sex ratios can be compared. If loggerhead hatchling sex ratios have skewed the adult sex ratios, we are not yet seeing the effects in the breeding sex ratio for the Gulf of Mexico,” said Wyneken. “Rather, it seems that females have access to a larger number of males, perhaps as they migrate from multiple feeding grounds to the nesting beaches. There is no indication from our data that sex ratio bias has become so severe that extinction risk is elevated at this time. However, loggerhead sea turtles take several decades to reach sexual maturity so female bias in hatchlings may take a while to show up in the adult populations.”

The loggerhead sea turtle (Caretta caretta) is listed globally as vulnerable by the International Union for the Conservation of Nature. Along the continental United States and adjacent waters in the northwest Atlantic Ocean, it is listed as threatened. The northwest Atlantic contains one of only two marine turtle aggregations of more than 10,000 individuals nesting annually. Florida nesting loggerheads make up approximately 90 percent of the loggerhead production in the Atlantic north of the equator.

This research was supported by the Sanibel Captiva Conservation Foundation as well as grants awarded from the Sea Turtle Grants Program (Florida Sea Turtle License Plate Grants), The Friends of Gumbo Limbo Gordon Gilbert Scholarship, the National Save the Sea Turtle Foundation, and the Nelligan Sea Turtle Research Support Fund.