Who is the Real Indiana Jones? 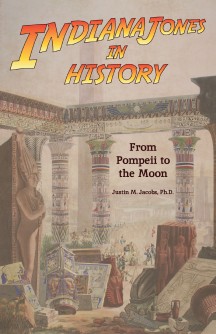 Jacket cover, Indiana Jones in History: From Pompeii to the Moon. 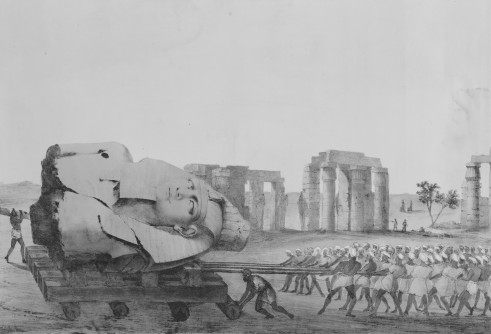 Removal of the Memnon Head from Luxor. 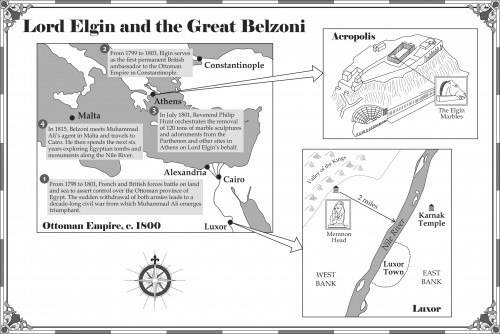 Lord Elgin and the Great Belzoni

Newswise — Since the first movie “Indiana Jones: Raiders of the Lost Ark” debuted in 1981, many have tried to identify the inspiration for the iconic professor-archaeologist character. Justin M. Jacobs, associate professor of history at American University, is the first to tell the historical story of Indiana Jones.

Jacobs’s new book, Indiana Jones in History: From Pompeii to the Moon (Pulp Hero Press, 2017), evolved out of his junior-level course on archaeological exploration during the height of Euro-American imperial expansion and his childhood love of the Indiana Jones’s films. Synthesizing historical accounts and primary research, Jacobs narrates significant archeological and scientific finds in modern history and more than 40 explorers and scholars who evoke the character.

“Indiana Jones in History is a history of the scientists, collectors, scholars and explorers who, in the name of empire and civilization, sought wealth and power in the guise of sponsoring cultural progress and serving the public interest,” Jacobs said. “It is about the antiquities removed from India, China, the Middle East, Egypt, Greece and Rome that went in new museums in the West that stood for modernity, civility and state power.”

‘That belongs in a museum!’

It’s one of the most famous lines in modern movie history, and what separates Indiana Jones’s character from a common tomb raider. In Jacobs’s course, students are taught to question museum narratives. They grapple with the Western discourse of superiority and cultural appropriation, which saw its inhabitants as the modern descendants of ancient civilizations worthy of admiration, and believed only a Western framework could make sense of civilized ancient cultures. They focus on what the famous digs, discoveries, and expeditions of 200 years reveal about explorers and their societies, including the influence of class and economic status.

It’s an uncommon way to explore history, Jacobs says, but central to his interest as a historian: making sense of how and why so many antiquities from less developed parts of the world ended up in the museums of the more developed.

Take the 19th-century Italian sojourner and circus performer the Great Belzoni, whose fame comes from helping to remove “The Younger Memnon,” the head and bust of ancient Egyptian ruler Ramses II on display in the British Museum.

“It’s about ‘This supports my empire and my state and my job and my salary,’ at the expense of everyone else,” Jacobs said.

Jacobs reveals the ‘rational barter calculus’ of antiquities transactions. At this point in history, modern-day descendants didn’t yet identify with their ancient pasts (China being the lone exception). If helping a Westerner excavate and remove a ruin brought about jobs, income and infrastructure, that was a win. Antiquities were given away as “gifts,” which provided diplomatic capital for a resource-poor country, Jacobs said.

The story of the Elgin marbles, also removed during the 19th century, is a fitting example of an antiquity leaving its original location on the agreement of all involved. Lord Elgin decides he wants to improve the arts in Great Britain. He needs Greek marble sculptures to do this. The Turkish Ottomans want to reward Britain for helping drive France out of Egypt, their province. As a result, the Ottomans let Lord Elgin remove over 100 tons of marble from the Greek Parthenon.

“When something was removed and taken abroad, more often you find out that everyone knew what was going on,” Jacobs said. “The authorities were aware of it and compensation was arranged, and there was no protest. It’s disturbing to realize that.”

Nearly 100 years after explorers like the Great Belzoni and Lord Elgin succeed in antiquities removal, the balance of power begins to shift.

It culminates with the attempts of British archaeologist and Egyptologist Howard Carter in 1922 to remove artifacts from the tomb of the ancient Egyptian pharaoh Tutankhamun. He is stopped by the Egyptians. Western colonial empires are in retreat. Resistance is common. Areas near ruins are now more developed and their present-day inhabitants, educated and undergoing their own cultural renaissance, increasingly identify with the antiquities in their midst.

Not only that, but World War I and the rise of the ‘archeologist as spy’ – scientists conscripted for military efforts – call into question the ideological neutrality of the explorer.

Coming to a theater near you

In the final chapter, Jacobs analyzes the films against historical realities, using a leaked 1978 transcript on the internet of the filmmakers’ original brainstorming sessions. They get a failing grade. They never intended historical accuracy, Jacobs says, but the films do reflect the same stereotypes, biases and sinister colonial ideas about non-Western peoples explorers held.

The fifth film is slated for 2020. Few details are known, but it will reunite filmmaker Steven Spielberg and lead actor Harrison Ford. Do the filmmakers have a responsibility to historical accuracy? Today’s audiences demand inclusion, authenticity and no harmful stereotypes.

Jacobs says that the Indiana Jones films would “age more gracefully if the facts of history were reflected more prominently in its plots and characters.” He notes that by the 1930s, the decade in which the first three films are set, the “golden age” of Western archaeological enterprise was long passed, and Chinese, Turkish, and Arab counterparts had roles just as prominent as Westerners.

“There is an epic story waiting to be told here,” Jacobs writes, “one that would better stand the test of time, but it requires the combined talents of both entertainers and educators.” 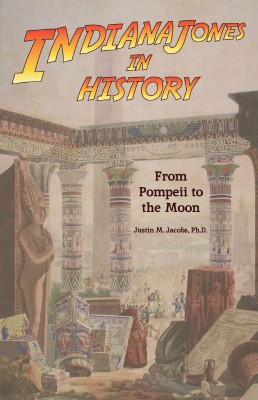 Caption: Jacket cover, Indiana Jones in History: From Pompeii to the Moon. 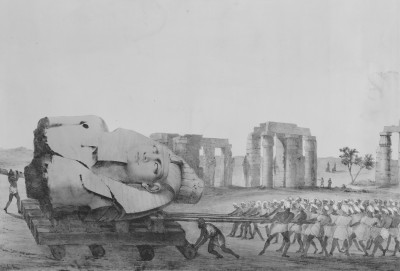 Caption: Removal of the Memnon Head from Luxor. 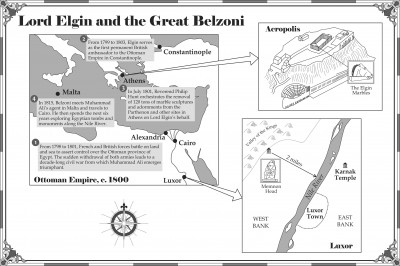