Whose Line Is It, Anyway?

Improv Class Teaches Student Engineers to Think on Their Feet 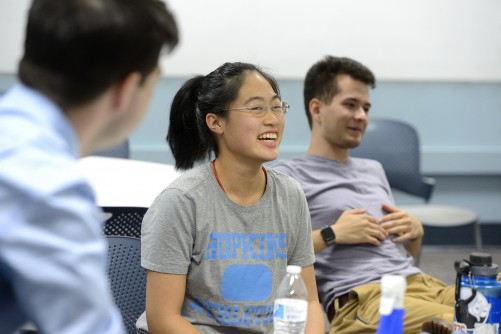 Megumi Chen, center, a senior applied mathematics and statistics major, says the improv class has enhanced her ability to listen and engage in public speaking. 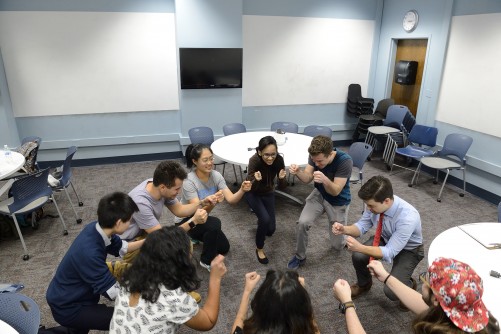 Whose Line is It, Anyway? Improv Class Teaches Student Engineers to Think on Their Feet

Newswise — Engineering students have lots of experience with lines, from the structural lines of buildings to the lines of code in software. But a new class at the Johns Hopkins University is teaching them about other lines – the kind that might be tossed their way in an improvisational comedy scene.

Offered for the first time this semester, “Improvisation for Scientists and Engineers” uses lessons borrowed from theater classes to help such students hone their off-the-cuff verbal skills and develop poise in front of groups – valued skills in the professional world.

The Johns Hopkins class, offered through the Whiting School of Engineering’s Center for Leadership Education, is the brainchild of Edward R. Scheinerman, the school’s vice dean for education, an applied mathematician who admits that he dreams of taking up improv when he retires.

“It’s a generalization, I know, but we engineers and scientists tend to be more analytical and deliberate, as opposed to spontaneous, and many of us could benefit from practice in thinking on our feet,” Scheinerman says. “The bottom line is that, at Hopkins, our goal is to make sure that our engineers and scientists have all the knowledge and skills they need when they graduate, including the kind of interpersonal and communication skills that improv teaches. So much of engineering work is collaborative, after all.”

Improvisational theater is a form of live theater in which performers build on each other’s spontaneous words and actions, creating the storyline, characters, and dialogue on the spot. There are no “no’s” in improv; in fact, the phrase “Yes, and …” is the guiding principal governing the art form.

“The secret is that improv not only teaches people to deal with the unexpected, but also how to turn that around and make it work for them,” says Michael Hartwell, the professional improv performer recruited by Johns Hopkins administrators to teach the new class.

A former Baltimore City public school English teacher, Hartwell is education director of the Baltimore Improv Group, a nonprofit organization dedicated to advancing the art and appreciation of improvisational theater.

According to Hartwell, improv teaches a number of important lessons, from focused and active listening and confident and effective interpersonal communications skills to teamwork, leadership, and even crisis management.

“Few things prepare a person to deal confidently and adroitly with unforeseen challenges the way improv does,” he says, pointing out that a number of top MBA programs, including those at MIT, UCLA, Duke, and Columbia, now offer improv classes to round out their students’ educations.

At Johns Hopkins, the new elective course began in January and will conclude on May 10 with a last round of improv performances, in place of final exams. Students in the small but enthusiastic inaugural class say the work they’ve done over the past 10 weeks has taught them innumerable skills and lessons that they will take with them out into the professional arena.

“Improv has not only improved my confidence in public speaking in general, but more specifically, it has shown me that I don’t have to worry about the unexpected, because I can handle whatever is thrown my way,” says Megumi Chen, a senior applied mathematics and statistics major at the Whiting School.

Chen, who will start a job in finance post-graduation, also credits her improv training with teaching her to listen – really listen.

“Listening is at the foundation of all communication, and I think the class has made me very good at it in a way I wasn’t before,” she says. “Previously, while the other person was talking, I might be thinking about what I was going to say, or feeling anxious about what I should say. Now, I tune in completely to what the other person is saying and respond to that. I think that is going to be an incredibly valuable skill in the professional world.”

Tia Aquart, a junior applied mathematics and statistics major, credits her experiences in Hartwell’s class with helping her to secure a coveted summer internship.

“I’ve finally landed an internship that I’ve been trying to get since freshman year, all because I struck gold in a conversation with the right person. I know for a fact that would be unheard of for me prior to taking this class,” Aquart says.

Aquart is convinced that her newfound self-confidence will turn out to be just as valuable as the academic knowledge and skills she acquired in more traditional classroom settings throughout her college career.

“Nowadays, networking plays a huge part in landing a job. I can’t solely rely on my awesome academic success; I need to know how to amaze the interviewer as well. That’s where improv is the essential key to success. I can’t memorize lines for every possible question someone could ask me. I now know how to answer any question without prior preparation,” she says. 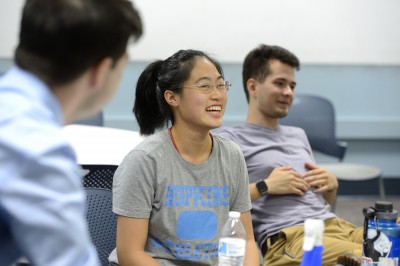 Caption: Megumi Chen, center, a senior applied mathematics and statistics major, says the improv class has enhanced her ability to listen and engage in public speaking. 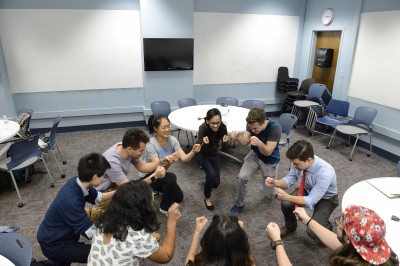