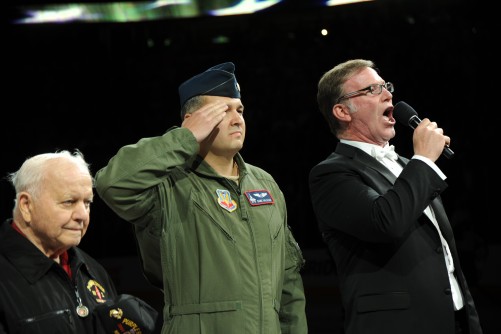 Salazar had been chosen to stand on the rink and salute the flag during the dramatic singing of the National Anthem, accompanied by thunderous cheers from 21,597 fans at the United Center.

“It was a patriotic moment,” Salazar said. “And very moving.”

Before every home Blackhawks game, two members of the Armed Services – one active duty and one veteran – are chosen to stand with soloist Jim Cornelison as he belts out his stirring rendition of the National Anthem. The salute on ice, coordinated by the Blackhawks and the USO of Illinois, is a way to honor the men and women who have served their country. The veteran who appeared with Salazar was Richard Yavenue of the U.S. Marine Corps.

Salazar has been on active duty in the Air Force since 2001. He has been deployed in support of Operation Iraqi Freedom and Operation Enduring Freedom (Afghanistan). He currently is doing his training at Loyola, where he is completing the fifth year of an orthopaedic residency.

"We are extremely proud that Dr. Salazar is a Loyola Orthopaedic Surgery resident,” said Terry Light, MD, chair of the Department of Orthopaedic Surgery and Rehabilitation. “He demonstrates the highest of values through his service to our country, dedication to work and study and through his commitment to his wonderful family."

Salazar is a diehard Blackhawks fan, and he attends about 25 games per year. On May 9, he brought his wife, Melanie, and sons Javier, 16, and Angel, 9, to see the Blackhawks advance to the second round of the Stanley Cup playoffs with a convincing 5-1 victory over the Minnesota Wild.

While Salazar wore his flight suit, the civilian members of his family wore Blackhawks jerseys.