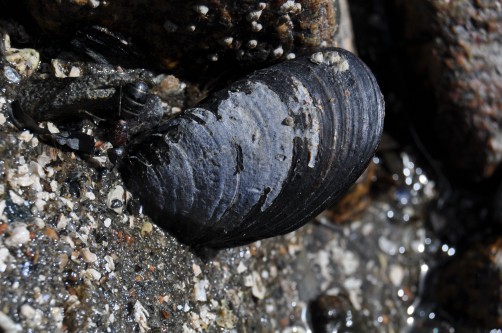 A blue mussel clings to a rock at Mount Desert Island, off the coast of Maine.

Newswise — Irvine, Calif., Aug. 9, 2016 — The Gulf of Maine coastline, historically home to one of the richest shellfish populations in the U.S., is undergoing a dramatic change, with once-flourishing wild blue mussels all but disappearing, according to a study led by University of California, Irvine ecologists.

After comparing contemporary survey data with 40 years of historical benchmarks, Cascade Sorte, assistant professor of ecology & evolutionary biology at UCI, and colleagues from around the U.S. report that the blue mussel numbers have declined by more than 60 percent along the gulf coastline, which stretches from Cape Cod north to the Canadian border. The mussels used to cover as much as two-thirds of the intertidal zone, but they now cover less than 15 percent.

Among the suspected reasons for this are warming oceans and increased human harvesting, Sorte said. Elevated air and water temperatures push the mussels out of their comfort zone, heightening physiological stress and, ultimately, mortality rates. Study results appear in Global Change Biology. Link to study: http://onlinelibrary.wiley.com/doi/10.1111/gcb.13425/full

“The Earth is in the midst of a biodiversity crisis,” Sorte said, “and the Gulf of Maine is one of the fastest-warming areas of the global ocean, so the impacts of ocean warming are likely to happen much sooner there.”

Blue mussels play an important role as filter feeders, removing bacteria, heavy metals and toxins from the water. They are a foundation species in the intertidal community that create habitat and enlarge the diversity of life supported by a locale. Their decline is of great concern, Sorte added, because it could precipitate “cascading extinctions” among other species.

The researchers note that the loss of mussels is coinciding with a restructuring of the intertidal community.

“The shoreline looks completely different than it used to,” Sorte said. “Where mussels were one of the most abundant and iconic species, now barnacles and algae dominate. The local inhabitants see these changes happening before their eyes.”

Other studies on the Gulf of Maine have documented a decrease in native species and an increase in invasive species, as well as more southern fish. To inform future conservation efforts, Sorte said, her research provides a database of historical and contemporary baselines of mussel populations and dynamics in the gulf. The data underscores the importance of anticipating not only changes in diversity, but also changes in the abundance and identity of foundation species, which can have a domino effect in the ecosystem.

So what can be done for the blue mussels of Maine? Sorte said that more research – such as monitoring physiological stress levels and mortality rates in the mussels, along with harvesting practices – is needed to fully understand what’s causing the decline and where their parent populations are. These findings could guide future management decisions about conservation actions, such as protecting the most important parent populations.

“The lesson so far – from what we saw in this study and what others have documented around the world at other warming ‘hot spots’ – is that key foundation species are disappearing, and this can lead to regime shifts and large-scale, even catastrophic, changes in the ecosystem,” Sorte said.