Why Are Primates Big-Brained? Researchers’ Answer Is Food for Thought 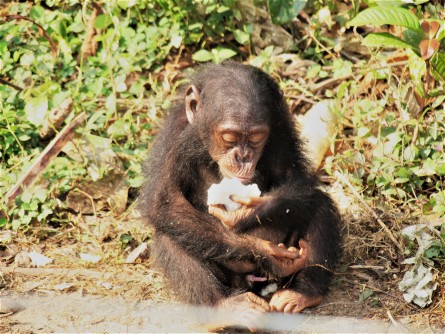 Brain size in primates is predicted by diet, an analysis by a team of NYU anthropologists indicates. Above, a chimpanzee eating fruit.

Newswise — Brain size in primates is predicted by diet, an analysis by a team of New York University anthropologists indicates. These results call into question “the social brain hypothesis,” which has posited that humans and other primates are big-brained due to factors pertaining to sociality.

The findings, which appear in the journal Nature Ecology and Evolution, reinforce the notion that both human and non-human primate brain evolution may be driven by differences in feeding rather than in socialization.

“Are humans and other primates big-brained because of social pressures and the need to think about and track our social relationships, as some have argued?” asks James Higham, an assistant professor in NYU’s Department of Anthropology and a co-author of the new analysis. “This has come to be the prevailing view, but our findings do not support it—in fact, our research points to other factors, namely diet.”

“Complex foraging strategies, social structures, and cognitive abilities, are likely to have co-evolved throughout primate evolution,” adds Alex DeCasien, an NYU doctoral candidate and lead author of the study. “However, if the question is: ‘Which factor, diet or sociality, is more important when it comes to determining the brain size of primate species?’ then our new examination suggests that factor is diet."

The social brain hypothesis sees social complexity as the primary driver of primate cognitive complexity, suggesting that social pressures ultimately led to the evolution of the large human brain. While some studies have shown positive relationships between relative brain size and group size, other studies which examined the effects of different social or mating systems have revealed highly conflicting results, raising questions about the strength of the social brain hypothesis.

In the Nature Ecology and Evolution study, the researchers, who also included Scott Williams, an assistant professor of anthropology at NYU, examined more than 140 primate species—or more than three times as many as previous studies—and incorporated more recent evolutionary trees, or phylogenies. They took into account food consumption across the studied species—folivores (leaves), frugivores (fruit), frugivores/folivores, and omnivores (addition of animal protein)—as well as several measures of sociality, such as group size, social system, and mating system.

Their results showed that brain size is predicted by diet rather than by the various measures of sociality—after controlling for body size and phylogeny. Notably, frugivores and frugivore/folivores exhibit significantly larger brains than folivores and, to a lesser extent, omnivores show significantly larger brains than folivores.

The researchers caution that the results do not reveal an association between brain size and fruit or protein consumption on a within-species level; rather, they note, they are evidence of the cognitive demands required by different species to obtain certain foods.

“Fruit is patchier in space and time in the environment, and the consumption of it often involves extraction from difficult-to-reach-places or protective skins,” observes DeCasien.“Together, these factors may lead to the need for relatively greater cognitive complexity and flexibility in frugivorous species.”