Why I’m Hopeful about Lung Cancer 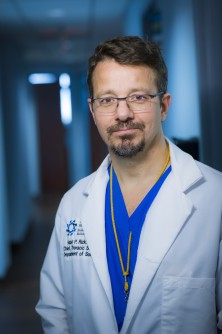 Newswise — November is Lung Cancer Awareness Month, and although lung cancer is the second most common cancer in the U.S. in both men and women, and lung cancer claims more lives than other types of cancers, I am hopeful about lung cancer for many reasons.

New cases of lung cancer continue to decrease, partly because people are quitting smoking, and death from lung cancer continues to decline due to less smoking. Important advances in early detection and new treatments, such as immunotherapy and lung-tissue preserving segmentectomy, are also helping in the fight against lung cancer. Segmentectomy is a promising alternative to more extensive open surgeries to remove lung tumors.

But we still need to work on cultural stigma about lung cancer, encourage early detection and treatment, including among those people most greatly affected by the disease, and greatly reduce or eliminate therapeutic nihilism about lung cancer – the flawed notion that it's not possible to cure people through treatment.

Lung cancer occurs when cells become abnormal and grow too quickly in an uncontrolled fashion. The cancerous cells form tumors. The biggest risk factor for developing lung cancer is cigarette smoking. Lung cancer also can be caused by other tobacco use, breathing secondhand smoke, asbestos or radon exposure, and a family history of lung cancer.

The U.S. Preventive Services Task Force (USPSTF) released updated lung cancer screening recommendations in 2021, lowering the screening age from 55 to 50 years and smoking history from 30 to 20 pack-years. A pack-year is calculated by multiplying the number of packs of cigarettes smoked per day by the number of years the person has smoked. These changes are expected to expand screening access to women and people from racial and ethnic minority groups and enhance opportunities for community-based programs to reduce barriers to lung cancer screening for individuals who are at highest risk for lung cancer.

According to the Lung Cancer Research Foundation, lung cancer affects Black Americans, particularly Black men, differently than their white counterparts. Black men are 11 percent more likely to be diagnosed with lung cancer, and almost 10 percent more Black men die from the disease. While smoking remains the primary risk factor to developing lung cancer, about 20% of lung cancer patients did not smoke.

People with lung cancer may experience stigma because of its association with smoking. They may be viewed or treated differently than people with other types of cancers. For example, some individuals may believe that people living with lung cancer caused the illness, while others may believe only smokers get lung cancer. The truth is that no one deserves lung cancer and everyone has a right to quality treatment, compassion and a chance at survival, whether they smoked or not.

Treatment of lung cancer is tailored for the stage of the disease and may include a combination of surgery, chemotherapy, radiation therapy, targeted drug therapy and immunotherapy, a breakthrough treatment approach that uses the body’s own natural defense system to fight off cancer. Long term survival for lung cancer is directly correlated to the stage of disease.

Surgery is still considered the standard for treating early-stage lung cancer. Removing the tumor and surrounding lung tissue gives the best chance for cure when the lung cancer is confined to the lungs. The cancerous lung tissue is removed with some healthy tissue. This may be performed  with video-assisted thoracic surgery (VATS) or robotic-assisted surgery. Surgical resection of lung cancer is generally performed as:

For larger lung cancer or lung cancer that has spread from the lungs,  chemotherapy, immunotherapy, targeted therapy, or radiation may be recommended.

Lung segmentectomy is often recommended for early non-small cell lung cancer. This surgery removes the lung disease without removing excess normal lung, thus preserving lung function. It is especially helpful in patients with existing limited lung function, such as those with emphysema, and supports the goal of saving lung tissue in all patients whenever possible.

Advances in technology allow us to use robotics to perform lung segmentectomy, offering minimal incisions and a level of precision that open surgery and even video-assisted surgery do not permit. Robot-assisted segmentectomy offers an alternative that is associated with fewer complications and shorter postoperative hospitalization than other techniques. Surgeons can also better remove affected Lymph nodes in early lung cancer using robotics. More studies are needed to assess postoperative pain, respiratory function, and quality of life, but this procedure offers great promise in thoracic oncologic surgery.

So this month as we recognize Lung Cancer Awareness month, let’s encourage people at greater risk of lung cancer from smoking or other causes to be screened for the disease; let’s try to eliminate stigma about it by not blaming anyone for getting the disease because of their past or present behavior; and let’s be hopeful that we can treat and cure lung cancer, not brush it off as not worthy of treatment.  And in academic and clinical settings, let’s continue to fund and study the most promising new treatments and surgical approaches to further improve treatment success and survival.