Why males pack a powerful punch

Upper arm strength, different from females’, may be specialized for forceful blows 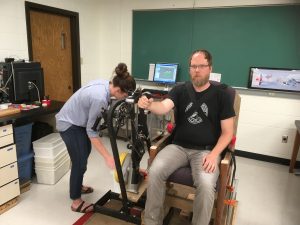 Coauthor Jenna Link prepares the hand crank for measuring a volunteer's power in a punching motion.

Newswise — Elk have antlers. Rams have horns. In the animal kingdom, males develop specialized weapons for competition when winning a fight is critical. Humans do too, according to new research from the University of Utah. Males’ upper bodies are built for more powerful punches than females’, says the study, published in the Journal of Experimental Biology, suggesting that fighting may have long been a part of our evolutionary history.

“In mammals in general,” says U professor David Carrier, “the difference between males and females is often greatest in the structures that are used as weapons.”

For years, Carrier has been exploring the hypothesis that generations of interpersonal male-male aggression long in the past have shaped structures in human bodies to specialize for success in fighting. Past work has shown that the proportions of the hand aren’t just for manual dexterity- they also protect the hand when it’s formed into a fist. Other studies looked at the strength of the bones of the face (as a likely target of a punch) and how our heels, planted on the ground, can confer additional upper body power.

“One of the predictions that comes out of those,” Carrier says, “is if we are specialized for punching, you might expect males to be particularly strong in the muscles that are associated with throwing a punch.”

Jeremy Morris, then a doctoral student and now an assistant professor at Wofford College, designed an experiment with Carrier, doctoral student Jenna Link and associate professor James C. Martin to explore the sexual dimorphism, or physical differences between men and women, of punching strength. It’s already known that males’ upper bodies, on average, have 75% more muscle mass and 90% more strength than females’. But it’s not known why.

“The general approach to understanding why sexual dimorphism evolves,” Morris says, “is to measure the actual differences in the muscles or the skeletons of males and females of a given species, and then look at the behaviors that might be driving those differences.”

Cranking through a punch

To test their hypothesis the researchers had to measure punching strength, but carefully. If participants directly punched a bag or other surface, they risked hand injury. Instead, the researchers rigged up a hand crank that would mimic the motions of a punch. They also measured participants’ strength in pulling a line forward over their head, akin to the motion of throwing a spear. This tested an alternative hypothesis that males’ upper body strength may have developed for the purpose of throwing or spear hunting.

Twenty men and 19 women participated. “We had them fill out an activity questionnaire,” Morris says, “and they had to score in the ‘active’ range. So, we weren't getting couch potatoes, we were getting people that were very fit and active.”

But even with roughly uniform levels of fitness, the males’ average power during a punching motion was 162% greater than females’, with the least-powerful man still stronger than the most powerful woman. Such a distinction between genders, Carrier says, develops with time and with purpose.

“It evolves slowly,” he says, “and this is a dramatic example of sexual dimorphism that's consistent with males becoming more specialized for fighting, and males fighting in a particular way, which is throwing punches.”

They didn’t find the same magnitude of difference in overhead pulling strength, lending additional weight to the conclusion that males’ upper body strength is specialized for punching rather than throwing weapons.

Breaking a legacy of violence

It’s an uncomfortable thought to consider that men may be designed for fighting. That doesn’t mean, however, that men today are destined to live their ancestor’s violent lives.

“Human nature is also characterized by avoiding violence and finding ways to be cooperative and work together, to have empathy, to care for each other, right?” Carrier says. “There are two sides to who we are as a species. If our goal is to minimize all forms of violence in the future, then understanding our tendencies and what our nature really is, is going to help.”

Find the study here. The study was funded by the National Science Foundation and included additional co-authors Jenna Link and James C. Martin, both of the Department of Nutrition and Integrative Physiology at the University of Utah.