Why Social Isolation Can Bring a Greater Risk of Illness 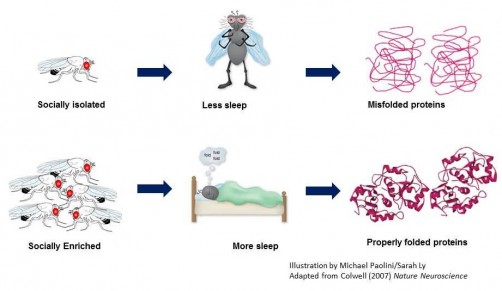 The effect of sleep and social isolation on protein folding.

Newswise — PHILADELPHIA—Social isolation has been linked to a wide range of health problems, as well as a shorter lifespan in humans and other animals. In fact, during a U.S. Senate hearing on aging issues this spring, a representative for the Gerontological Society of America urged lawmakers to support programs that help older adults stay connected to their communities, stating that social isolation is a “silent killer that places people at higher risk for a variety of poor health outcomes.”

Now, researchers at the Perelman School of Medicine at the University of Pennsylvania have found a possible explanation for this association. The team observed that in the fruit fly Drosophila melanogaster, social isolation leads to sleep loss, which in turn leads to cellular stress and the activation of a defense mechanism called the unfolded protein response (UPR). Their findings are published online in the journal SLEEP this month.

The UPR is found in virtually all animal species. Although its short-term activation helps protect cells from stress, chronic activation can harm cells. Long-term, harmful activation of the UPR is suspected as a contributor to the aging process and to specific age-related diseases such as Alzheimer’s and diabetes.

Studies also have shown that social isolation is a growing problem in developed countries. In the United States, for example, about half of people older than 85 live alone, and decreased mobility or ability to drive may cut opportunities for other socialization.

“A lot of elderly people live alone, and so we suspect that stresses from the combination of aging and social isolation creates a double-whammy at the cellular and molecular level,” said senior author Nirinjini Naidoo, PhD, a research associate professor of Sleep Medicine. “If you have an age-related disruption of the UPR response, compounded by sleep disturbances, and then you add social isolation, that may be a very unhealthy cocktail.”

This line of research stemmed from a surprise finding by the new study’s first author, Marishka K. Brown, PhD, who was then a postdoctoral researcher at Penn. She is now Program Director of the National Center on Sleep Disorders Research at the National Heart, Lung, and Blood Institute (NHLBI). While evaluating the effects of aging on the UPR in fruit flies, she noticed that molecular markers of UPR activation were at higher levels in flies kept singly in vials, compared to same-aged flies kept in groups.

Markers of UPR activation include the protein BiP, a molecular “chaperone” that helps ensure proper protein folding within cells. Proteins, after being synthesized as simple chains of amino acids, are meant to fold into functional shapes, which are often highly complex. This delicate process is easily disturbed when cells are under stress and can lead to the harmful, runaway clumping of unfolded or misfolded proteins.

As its name suggests, the UPR is supposed to protect against this cellular catastrophe. But when it fails to work efficiently to restore proper protein-folding conditions, and stays activated, it can trigger harmful inflammation, suppress normal, healthy cellular activity, and ultimately force the death of the cell. Scientists have found evidence that this inefficient, chronic response becomes more likely with aging. “When animals get older, you start to see a more maladaptive UPR,” Naidoo said.

“When you keep animals isolated, it basically induces a disturbance of sleep, which then gives rise to a cellular stress that in turn triggers the UPR,” Naidoo said.

Naidoo and her colleagues are continuing to study the connections among aging, sleep loss, the UPR, and age-related diseases such as Alzheimer’s. “Aging itself seems to make the UPR more defective, but we suspect this is worsened by the fact that aging also tends to cause more fragmented sleep,” Naidoo said.

The other co-author of the study was Ewa Strus, also from Penn.