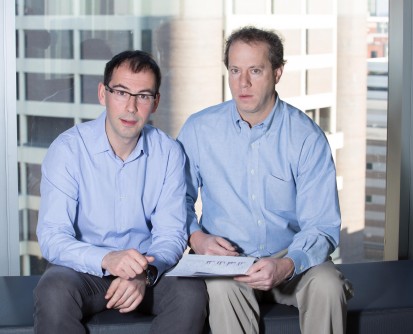 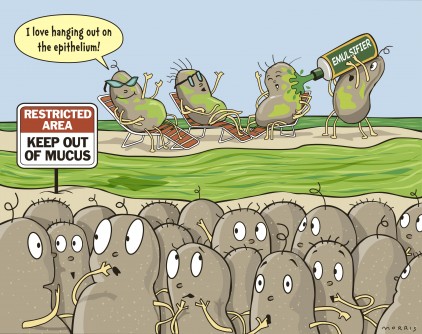 This illustration shows bacteria that are present deeper in the mucus layer that lines the intestine and closer to the epithelium than they should be. 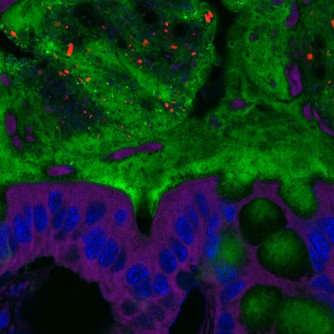 This photo shows bacteria that are present deeper in the mucus layer that lines the intestine and closer to the epithelium than they should be.

Newswise — ATLANTA—Emulsifiers, which are added to most processed foods to aid texture and extend shelf life, can alter the gut microbiota composition and localization to induce intestinal inflammation that promotes the development of inflammatory bowel disease and metabolic syndrome, new research shows.

Inflammatory bowel disease (IBD), which includes Crohn’s disease and ulcerative colitis, afflicts millions of people and is often severe and debilitating. Metabolic syndrome is a group of very common obesity-related disorders that can lead to type-2 diabetes, cardiovascular and/or liver diseases. Incidence of IBD and metabolic syndrome has been markedly increasing since the mid-20th century.

The term “gut microbiota” refers to the diverse population of 100 trillion bacteria that inhabit the intestinal tract. Gut microbiota are disturbed in IBD and metabolic syndrome. Chassaing and Gewirtz’s findings suggest emulsifiers might be partially responsible for this disturbance and the increased incidence of these diseases.

“A key feature of these modern plagues is alteration of the gut microbiota in a manner that promotes inflammation,” says Gewirtz.

“The dramatic increase in these diseases has occurred despite consistent human genetics, suggesting a pivotal role for an environmental factor,” says Chassaing. “Food interacts intimately with the microbiota so we considered what modern additions to the food supply might possibly make gut bacteria more pro-inflammatory.”

Addition of emulsifiers to food seemed to fit the time frame and had been shown to promote bacterial translocation across epithelial cells. Chassaing and Gewirtz hypothesized that emulsifiers might affect the gut microbiota to promote these inflammatory diseases and designed experiments in mice to test this possibility.

The team fed mice two very commonly used emulsifiers, polysorbate 80 and carboxymethylcellulsose, at doses seeking to model the broad consumption of the numerous emulsifiers that are incorporated into almost all processed foods. They observed that emulsifier consumption changed the species composition of the gut microbiota and did so in a manner that made it more pro-inflammatory. The altered microbiota had enhanced capacity to digest and infiltrate the dense mucus layer that lines the intestine, which is normally, largely devoid of bacteria. Alterations in bacterial species resulted in bacteria expressing more flagellin and lipopolysaccharide, which can activate pro-inflammatory gene expression by the immune system.

Such changes in bacteria triggered chronic colitis in mice genetically prone to this disorder, due to abnormal immune systems. In contrast, in mice with normal immune systems, emulsifiers induced low-grade or mild intestinal inflammation and metabolic syndrome, characterized by increased levels of food consumption, obesity, hyperglycemia and insulin resistance.

The effects of emulsifier consumption were eliminated in germ-free mice, which lack a microbiota. Transplant of microbiota from emulsifiers-treated mice to germ-free mice was sufficient to transfer some parameters of low-grade inflammation and metabolic syndrome, indicating a central role for the microbiota in mediating the adverse effect of emulsifiers.

The team is now testing additional emulsifiers and designing experiments to investigate how emulsifiers affect humans. If similar results are obtained, it would indicate a role for this class of food additive in driving the epidemic of obesity, its inter-related consequences and a range of diseases associated with chronic gut inflammation.

While detailed mechanisms underlying the effect of emulsifiers on metabolism remain under study, the team points out that avoiding excess food consumption is of paramount importance.

“We do not disagree with the commonly held assumption that over-eating is a central cause of obesity and metabolic syndrome,” Gewirtz says. “Rather, our findings reinforce the concept suggested by earlier work that low-grade inflammation resulting from an altered microbiota can be an underlying cause of excess eating.”

The team notes that the results of their study suggest that current means of testing and approving food additives may not be adequate to prevent use of chemicals that promote diseases driven by low-grade inflammation and/or which will cause disease primarily in susceptible hosts.

This study was funded by the National Institutes of Health and Crohn’s & Colitis Foundation of America. 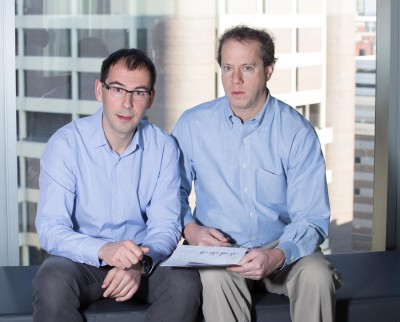 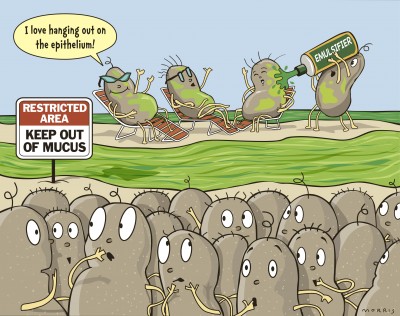 Caption: This illustration shows bacteria that are present deeper in the mucus layer that lines the intestine and closer to the epithelium than they should be. 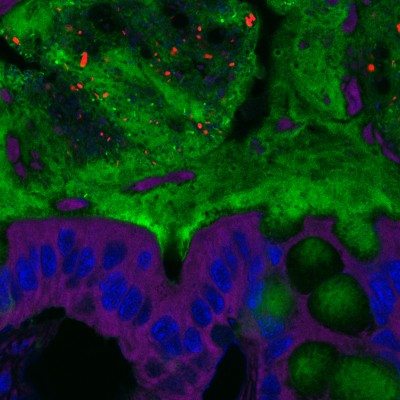 Caption: This photo shows bacteria that are present deeper in the mucus layer that lines the intestine and closer to the epithelium than they should be.