Newswise — Astronomers may have discovered the relative of a freakishly behaving exploding star once thought to be the only one of its kind.

For more than two decades, astronomers have intensively studied supernova 1987A, an exploding star that had behaved like no other. Instead of growing dimmer with time, 1987A has grown brighter at X-ray and radio wavelengths.

A team of astronomers that includes the University of Chicago's Vikram Dwarkadas is asking if supernova 1996cr, discovered by Columbia University's Franz Bauer, is actually the "wild cousin" of supernova 1987A.

"This may be the second case, after '87a, where we see emission that's increasing dramatically," said Dwarkadas, Senior Research Associate in Astronomy & Astrophysics at Chicago. "Normally, you would expect the emission to decrease over time."

In a new paper published in the Astrophysical Journal, Bauer, Dwarkadas and five co-authors call 1996cr a potential "wild cousin" of the earlier supernova. "These two look alike in many ways, except this newer supernova is intrinsically 1,000 times brighter," Bauer said.

Supernova 1996cr is located 12 million light years from Earth in the spiral galaxy Circinus, making it one of the nearest-known exploding stars of the last quarter-century.

When 1996cr exploded in the mid-1990s, no one noticed. Bauer first detected the object in 2001 using NASA's Chandra X-ray Observatory. Although intrigued by its exceptional qualities, Bauer, then at Pennsylvania State University, and his associates were unable to verify it as a supernova.

All told, Bauer's team examined data from 18 different telescopes, both orbiting and ground-based, nearly all of it coming from the observatories' Internet archives.

Most supernovas grow dimmer with the passage of time as they release their energy. But the X-ray and radio emissions from 1987A grew brighter because its shock wave had crashed into a dense cloud of gas and dust. Supernova shock waves initially move at speeds of 10,000 miles or more each second.

According to the calculations of Dwarkadas and other theoreticians, these interstellar gas clouds form a bubble around stars at least eight times more massive than the sun, possibly the product of smaller upheaval or a lifetime of mass-loss from solar wind emissions that took place before the supernova.

These wind-blown bubbles, as astronomers call them, are like a balloon: empty in the middle with a shell around the outside. The explosion moves rapidly through the cavity for several years because there's almost nothing to stop it. "Then it hits this dense shell. It slows down and begins to give off a lot of emission," Dwarkadas said.

Supernovas close enough to be studied in such detail come by only once a decade, Bauer said. "It's a bit of a coup to find SN1996cr in the manner we did, and we could never have nailed it without the serendipitous data taken by all of these telescopes. We've truly entered a new era of 'Internet astronomy,'" he said. 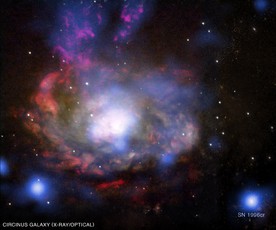 Caption: This composite image shows the central regions of the nearby Circinus galaxy, located about 12 million light years away. Data from NASA's Chandra X-ray Observatory is shown in blue and data from the Hubble Space telescope is shown in yellow, red, cyan and light blue. The blue source near the lower right hand corner of the image is the supernova SN 1996cr, that has finally been identified over a decade after it exploded. 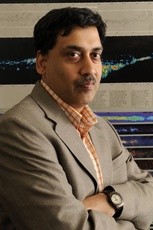