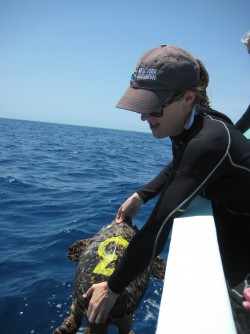 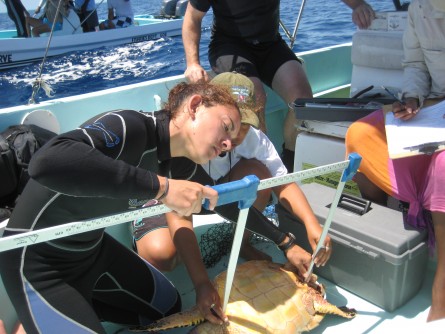 One of the Belizean volunteers measures a hawksbill turtle. 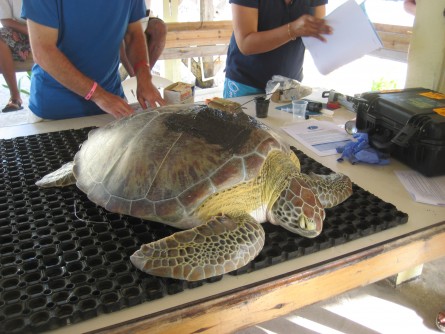 "Pebbles" the green turtle with its satellite tag, before it was released in the same spot it was captured.

Newswise — Marine scientists and veterinarians from the Wildlife Conservation Society teamed up with volunteers from Belize and Google for this year’s annual sea turtle survey in the coastal waters of Belize. The project, conducted in collaboration with the Belize Fisheries Department, received some key support from staff of Google, Hol Chan Marine Reserve and the Environmental Research Institute (University of Belize) as they assisted in the sighting, capture, tagging, and release of the marine-dwelling reptiles.

The four main objectives of the surveys, which have been conducted since 2007, are: to determine an absolute abundance estimate of the three species of turtles on the Glover’s Reef Atoll; to increase knowledge of sea turtle movements and habitat use; to assess genetic stock and growth rates of sea turtles on the Atoll; and to increase the capacity of stakeholders to collect accurate and standardized data.

For the second straight year, WCS led a group of volunteers from Google to participate in the annual sea turtle survey at Glover’s Reef Research Station. Over a week-long period, the team snorkeled 16 one hour long transects in Glover’s Reef Atoll, and sighted 90 sea turtles, 75 of which were the critically endangered Caribbean hawksbill turtles. The team also captured by hand a total of 27 sea turtles – 24 hawksbills, 2 greens and one loggerhead.

“The data collected during the surveys will help us answer a number of questions on these species, ranging from how many sea turtles might live in this area to how exactly they use their environment,” said Robin Coleman, WCS Belize Assistant Country Director and leader of the survey.

Once aboard the research vessel, the captured turtles were measured, weighed, and tagged by WCS Belize staff members. One turtle—a sub-adult green sea turtle—was fitted with a SPOT satellite tag, which will enable researchers to follow the long-range movements of the animal as it travels away from Glover’s Reef Atoll.

Before being released, the captured turtles were also given health assessments by Dr. Paul Calle, WCS’s Chief Veterinarian, and Kate McClave, Curator of Aquatic Health at the New York Aquarium. Specifically, the WCS veterinary staff conducted physical examinations on the turtles, which included the collection of blood and tissue samples for pathogenic, molecular, and genetic testing. The health experts also collected barnacles, algae, and other parasites; an analysis of the carbon and nitrogen isotopes in these epibionts can reveal information on regions where turtles acquire these passengers.

“The Annual Sea Turtle Survey is a great opportunity to learn valuable information about the biology and ecology of sea turtles—vital for effective management plans,” said Dr. Caleb McClennen, Director of WCS’s Marine Program. “We also thank our committed volunteers from Google and other quarters for helping us carry out our important conservation work at Glover’s Reef.”