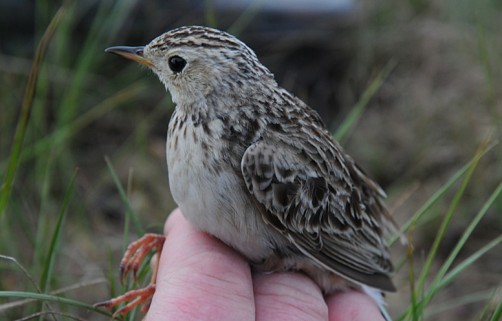 Adult Sprague’s pipit. This subtly-colored bird performs an amazing display, flying and singing in a small patch of sky at 100-300 feet for between 1-3 hours. Photo by Steve Zack, WCS.

Newswise — BOZEMAN (April 23, 2012) –The Wildlife Conservation Society, in partnership with the American Prairie Reserve, World Wildlife Fund-US, Nature Conservancy Canada, and The Nature Conservancy, has been awarded funding by the U.S. Fish and Wildlife Service to maintain and restore critical habitat for the Sprague’s pipit in northern Montana, North Dakota, and southern Saskatchewan. The funding comes as part of a new 2012 Neotropical Migratory Bird Conservation grants program initiative that focuses a portion of available funds on particularly threatened neotropical migratory birds.

As a group, grassland birds are the most imperiled in North America, and neotropical grassland birds—those that migrate south of the United States—are at particular risk due to habitat fragmentation, livestock overgrazing, and land conversion of their grassland habitats. Sprague’s pipit was once a common bird within its U.S. historical range but requires large areas of light-to moderately-grazed native grasses to breed. Habitat fragmentation due to tilling of land has greatly reduced the availability of such areas. The U.S. Geological Survey estimates that suitable habitat for the species has decreased by more than 97 percent.

“The pipit is recognized as one of the most endangered grassland birds in North America,” said WCS Conservationist Dr. Kevin Ellison. “The new U.S. Fish and Wildlife Service pilot program provides a critical mechanism to help highly threatened species such as the pipit.”

The partnership’s goal over the next five to six years is to increase the habitat for the U.S. Sprague’s pipit population by at least one percent (5,000 acres). Specific activities to be undertaken include improving habitat through grazing deferment, reseeding with native grasses, and targeted outreach to ranchers and agencies on the conservation and management options for this grassland species.

The project is designed to maximize win-wins between conservationists and livestock producers. Areas deferred from grazing will increase available forage in case of drought and allow grasses to recover between periods of grazing. Reseeding of crested wheat fields with native grasses can provide more nutrition to animals when grazing.

"Grassland birds in general, and the Sprague's pipit in particular, are disappearing as large grassland habitats are lost,” said Dr. Steve Zack, Coordinator of Bird Conservation for WCS. “Working with ranchers on managing grazing with wildlife in mind will go a long way toward keeping the Great Plains vibrant with singing birds and many other native species.”

In related work, WCS is working with U.S. National Park Service to study migration by the Sprague’s pipit, using tiny archival geolocator tags to record each bird’s location between breeding and wintering areas. The goal is to answer where, when, and how the species migrates and uses wintering areas. For instance, it is unknown to what extent staging or stop-over sites are used and whether the birds move between areas once on the wintering grounds. Such information will help prioritize areas for habitat enhancement or restoration.