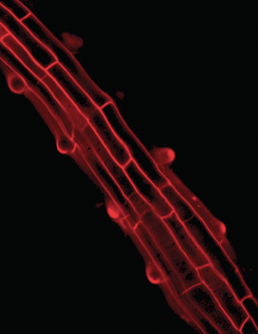 A photomicrograph of the elongated root cells of Arabidopsis thaliana, a model plant. A team of Wisconsin scientists led by biochemist Michael Sussman and writing in the journal Science reports the discovery of a signaling pathway that controls the growth of the root cells. The discovery is important because the newfound pathway and others yet to be discovered could have an impact on the plants humans use to produce food, fiber, fuel and medicines.

Newswise — MADISON, Wis. — For plants, the only way to grow is for cells to expand. Unlike animals, cell division in plants happens only within a tiny region of the root and stem apex, making cell expansion the critical path to increased stature.

But just how plants regulate cell growth at the molecular level using the genes, receptors and hormones that govern the process has been something of a black box. Now, a team of scientists from the University of Wisconsin-Madison reports the discovery of a hormone and receptor that control cell expansion in plants.

Writing today (Jan. 24, 2014) in the journal Science, a group led by Wisconsin biochemist Mike Sussman describes a signaling pathway that regulates cell expansion in the root cells of Arabidopsis plants, a model organism related to cabbage and mustard that is the plant scientist’s fruit fly.

The Wisconsin finding is important because it is the first such pathway found for the plant kingdom, revealing the details of how a particular hormone docks with a cell and influences its growth. The finding may be a harbinger for new ways to promote and regulate plant growth, including crops of vast economic importance.

In animals, cell growth is well studied largely because of its role in human health. Cell growth and cancer, for example, have been under the microscope for decades, leading to at least some insight into the basic mechanisms that dictate cell growth in animals and revealing potential targets for anticancer drugs.

The same cannot be said for plants.

“We know very little about the basic molecular mechanisms by which plant growth is regulated,” Sussman explains.

Such knowledge, however, is fundamentally important and would almost certainly usher in new technologies to manipulate the plants humans require for food, fuel, fiber and medicines.

In plants, cell division, or mitosis, occurs mainly at the very tip of roots and shoots in a small bit of tissue known as the meristem. Once the cells have divided, they undergo a carefully programmed pattern of cell expansion and differentiation, all the while staying immobile — fixed in place due to the rigid cellulosic cell walls characteristic of plants. “This is a fundamental difference with animals, where cells can migrate throughout the body, and also where the body itself can move about freely to escape stressful conditions,” Sussman says.

The new study describes a hormone secreted by the plant and a surface receptor known as a protein kinase. The hormone uses the receptor to influence a cell’s ability to elongate, to accommodate the growth and development of roots, stems, leaves and other plant parts.

In the model plant Arabidopsis, Sussman notes, there are about 30,000 genes. Of those, about 450 encode proteins that act as cell surface receptor protein kinases.

“In animals, almost every kinase receptor is incredibly important,” says Sussman, who directs the UW-Madison Biotechnology Center and conducted the new study with Wisconsin colleagues Miyoshi Haruta, Grzegorz Sabat, Kelly Stecker and Benjamin Minkoff. “Most are involved in pathways that regulate oncogenes, which are targets for cancer drugs. The paradigm is that these are generally important.”

In plants, the large family of receptor kinases and their hormones most likely play roles in many other aspects of plant metabolism, growth and development, although cell expansion is one of the more obvious: “Plant cells are long and they have to regulate their expansion very carefully,” says Sussman.

A plant’s ability to regulate growth can be vitally important for survival. Because they are rooted in place and lack defenses like the circulating immune system in animals where mobile cells travel to the site of an infection, plants must respond differently to threats like insects and disease.

“The only thing a plant can do is grow faster or slower,” notes Sussman. “If a pathogen attacks a plant, it stops growing and puts its energy into molecules that can thwart the pathogen.”

Sussman believes that the discovery of the plant cell growth pathway is “the tip of the iceberg. There are another 430 receptor kinase regulated pathways that we don’t know anything about.”

The Wisconsin study was supported by grants from the National Science Foundation and the Department of Energy.# # #