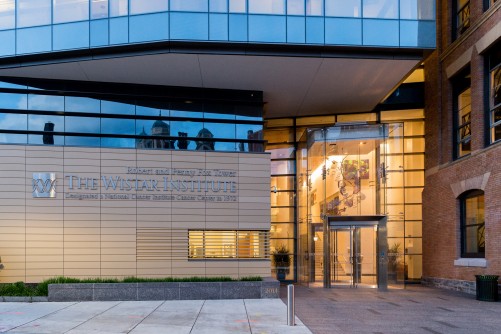 • Ashani Weeraratna, Ph.D., Ira Brind Associate Professor and program leader of Wistar’s Tumor Microenvironment and Metastasis Program, was awarded a National Institutes of Health (NIH) grant of $2,173,125 over a period of five years. The grant will fund Weeraratna’s research on the effects of aging on tumor progression. Dormant tumor cells that have invaded distant sites can stay silent in a non-proliferative state for a long time, until microenvironmental conditions favor their outgrowth. Based on previous studies from the Weeraratna lab on the mechanisms of age-related changes in melanoma tumor microenvironment, the new project is aimed at identifying how the aging micronvironment can contribute to awakening the dormant metastasis and to the outbreak of metastatic disease.

• The Wistar Institute was awarded a grant from The Pew Charitable Trusts in the amount of $1 million over three years for the recruitment of three new faculty members at the assistant or associate professor levels. The addition of the new investigators will support the expansion of Wistar’s immunotherapy and vaccine programs designed to identify innovative preventive and treatment methods against emerging infectious diseases and cancer.

The first is a NIH grant of $459,835 over two years to further develop circulating biomarkers for lung cancer. Previous research from Huang had identified a specific protein as a blood biomarker for non-small cell lung cancer. The grant will help validate the utility and accuracy of new biomarkers in assessing remission and predicting disease.

Another major focus of Huang’s research is to discover new molecular mechanisms that govern metastasis. A grant from the Elsa U. Pardee Foundation of $124,996 over one year will support research on the GABRA3 receptor, recently identified through a collaboration between Huang and Kazuko Kishikura, Ph.D., professor in Wistar’s Gene Expression and Regulation Program, as a critical regulator of breast cancer metastasis and as a potential therapeutic target. GABRA3 expression and function is regulated by a process called RNA editing that may control its role in cancer cell migration and invasion, so that modulation of RNA editing may present a novel therapeutic strategy.

The role of RNA editing in the metastatic progression of breast cancer is also the focus of another grant that was awarded to Huang by the PA Breast Cancer Coalition through the PA Breast and Cervical Cancer Research Initiative. This grant is in the amount of $50,000 for one year.

• Marie Ruth Webster, Ph.D., staff scientist in the Weeraratna laboratory, was awarded an NIH Pathway to Independence Award (K99) totaling $228,304 over two years, with an additional three years of funding following her transition to an independent researcher. The K99 award is a career transition award designed to support postdoctoral trainees on their path to becoming independent investigators. Webster’s research focuses on the role of Wnt signaling and epigenetic changes in the regulation of melanoma cell plasticity or the ability of a subset of melanoma cells to survive therapy by entering a slow-proliferating, senescent-like state, while retaining the ability to invade and ultimately form metastases.

• Erica Stone, Ph.D., assistant professor in Wistar’s Translational Tumor Immunology Program, received a $10,500 grant for one year from BNY Mellon Wealth Management through the Martha W. Rogers Charitable Trust. Stone’s lab will investigate the mechanism of resistance to immune checkpoint inhibitors that are being used to treat patients with advanced melanoma.

###The Wistar Institute is an international leader in biomedical research with special expertise in cancer research and vaccine development. Founded in 1892 as the first independent nonprofit biomedical research institute in the United States, Wistar has held the prestigious Cancer Center designation from the National Cancer Institute since 1972. The Institute works actively to ensure that research advances move from the laboratory to the clinic as quickly as possible. wistar.org.