Vulnerable communities within wealthy areas were the most common buyouts across the U.S.

Newswise — The Federal Emergency Management Agency has been offering voluntary buyout programs to homeowners in flood-prone neighborhoods since the 1980s.

And with increasingly powerful storms battering coastlines and flooding becoming more ubiquitous after heavy rains, these programs and the idea of managed coastal retreat have continued to garner more and more attention.

The University of Delaware has been at the forefront of trying to understand where and why FEMA-funded buyouts are offered and accepted. After Hurricane Sandy, Professors Sue McNeil, Joe Trainor, and Alex Greer (then a PhD student at UD) studied why homeowners accept FEMA-funded buyouts.

Now, a new study by a team involving University of Delaware researcher A.R. Siders is the first to examine nationwide data on FEMA’s buyout program. “Managed retreat through voluntary buyouts of flood-prone properties,” a study led by University of Miami’s Katharine J. Mach, was published today in Science Advances.

“It’s amazing to me that this program has existed for 30 years and no one has done this research,” said Siders, an assistant professor of Public Policy and Administration and Geography who is also affiliated with UD’s Disaster Research Center. “There are several great case studies of buyouts, but no one has looked at the whole program, the whole country, and that gives a different perspective.”

By examining records of more than 40,000 bought-up homes, the researchers found that over 1,100 counties in 49 states (Hawaii is the only state that does not take part in the program) have purchased and demolished at-risk homes to create open space and restore floodplains.

“It’s a great response to anyone who says managed retreat is too hard or no one will accept it, no one will participate. Well, here: Tens of thousands of homeowners have accepted it, and more than 1,000 counties have accepted it and figured it out,” Siders said. “Yes, we need to learn more about how it can be done, how it can be improved, but the baseline of just, ‘it can be done,’ is good visibility.”

And by examining the risk and demographic characteristics of the 1,100 counties that administered buyouts, the research team was able to build a detailed roadmap for future critical research on equity, race and other topics.

What made you and your team look at the FEMA buyouts?

Managed retreat is a hot topic, but it’s also data starved. There’s so little information out that any data point that comes out in the managed retreat literature is really exciting. The most obvious starting point for us seemed to be, let’s see what’s been done. Where have they happened, how have they been done, who’s doing them, who’s not, how’s it working out. Before FEMA can scale this up or change the program, they need to know how it’s worked so far.

What are the key findings?

One is that managed retreat is happening all over the United States, in 49 states. That’s a really big finding for me because it means no matter how difficult it is to do managed retreat, there’s 1,100 counties that have figured out how to do it. So that makes me optimistic.

Another is that we found that counties that are more affluent and denser are using buyouts more, and that was surprising because the economic models suggest buyouts should be happening in rural places. Which makes sense: If you’re in a rural area it probably doesn’t make sense to put in miles of seawalls to protect one home. So the models had suggested that the buyouts should have been occurring in rural, less dense, less affluent areas and instead we were finding the opposite.

However, although our data showed that local governments in counties with higher population and income were more likely to administer buyouts, the bought-out properties were actually concentrated in areas of greater social vulnerability within those counties.

What are the implications of the findings?

The findings point to concerns about equity. Richer, denser counties might be using buyouts more because they have the staff and resources to navigate FEMA’s bureaucracy. That could be a problem for small, rural areas that want to retreat.

The fact that rich, dense counties are buying up homes in low-income neighborhoods – is that a good thing or a bad thing? Lower-income communities might be in riskier areas, and they may be less able to recover after a disaster, so relocating could be a good decision. Or it could be a problem with the program. We know the issue is widespread – they’re not symptoms of one racist place, or one deviant mayor. This is a widespread, systematic issue. And that’s why it’s worthy of trying to solve whether or not it’s harmful.

What does the study say about the effectiveness of the FEMA buyouts?

The good news is that buyouts are happening in places that are at-risk and have experienced damage in recent disasters. So that tells us the program really is helping people in risky places, as it was designed to do.

There are still open questions, though. Right now this program puts no restrictions on where people move after a buyout. So in one case study that looked at the post-Sandy Staten Island buyouts, 20 percent of people moved into other floodplains. So they’re just as at risk as they were before. The program isn’t even requiring people to move back, it could be moving them sideways. Moving sideways along the coast doesn’t help you.

Where are the buyouts most common?

In North Carolina, there were 7,000 properties. That’s a lot. Compared to 40,000 across the United States, 7,000 in one state – that’s a big chunk of it. Maybe not surprisingly considering North Carolina’s exposure. Florida is not using buyouts as much, which opens up comparative research. What is it about Florida that’s limiting the scope? What is it about North Carolina that’s enabling it? Houston has one of the largest buyout programs in the U.S. Delaware, meanwhile, is doing very little.

A lot of the research is focused on what makes homeowners say yes or no to a buyout offer. I think there’s a lot more research that needs to happen on what makes a government decide to make an offer in the first place.

What’s the next step?

We’re hoping the piece is a call to action in that it shows that managed retreat is happening, it tests a couple of hypotheses, and opens up a lot of really interesting questions that are not answered, but could be answered. OK, there’s a big equity concern. You know what we need? We need more research on why this is turning out this way and whether or not that’s a good thing. That’s a wide-open research field requiring lots of case studies. And it won’t all be done by us. 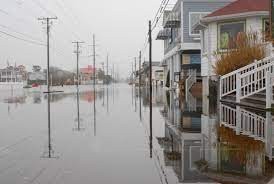 Caption: A first-of-its-kind study of FEMA buyouts in flood-prone areas found that most occur in wealthy, denser areas, but that within those areas the most likely targets were vulnerable communities. The study paves the way for future research into equity, race and other topics related to the buyouts.

Caption: A.R. Siders, an assistant professor in the University of Delaware's Disaster Research Center, is part of a team that embarked on the first-ever national assessment of FEMA buyouts. "It’s amazing to me that this program has existed for 30 years and no one has done this research. There are several great case studies of buyouts, but no one has looked at the whole program, the whole country, and that gives a different perspective."