In the style of a home improvement reality TV show, Carl Ade, Kansas State University assistant professor of exercise physiology, discusses the creation of the mock space capsule and the kinesiology research project. 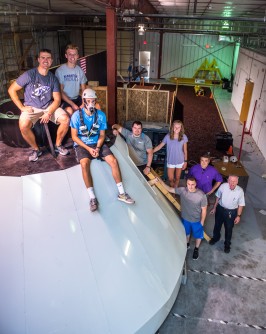 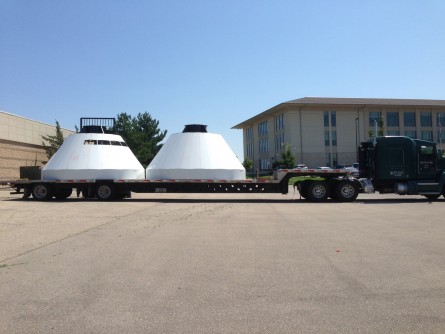 The two halves of a mock Orion spacecraft arrive at Kansas State University's Ice Hall in August. After the capsule frame arrived at the Manhattan campus, the kinesiology research team — including graduate and undergraduate students — finished the construction. Garret Lovoy, senior in nutrition and kinesiology, climbs out of the top of a mock Orion space capsule at Kansas State University. For a study on astronaut fitness, research participants wear special equipment that takes physiological measurements — such as muscle activity, oxygen uptake, heart rate and blood pressure — to determine what kind of stress the body experiences during an emergency escape. 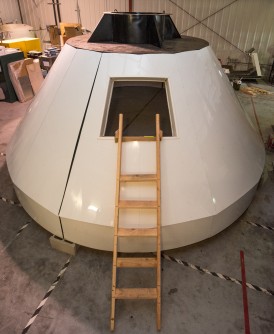 A lifesize replica of the Orion space capsule is helping a Kansas State University kinesiology team study astronaut fitness during an emergency escape. The NASA-funded research project can help with long-duration space missions to Mars or deep space.

It's all part of NASA's plan for further human exploration of the solar system, from a Mars mission to a deep space mission.

Ade and Barstow are using a two-year NASA grant to study the strength, cardiovascular health and aerobic capacity that astronauts need for an end-of-mission landing or an emergency escape.

That's where the model Orion spacecraft fits in. After a deep space mission, the Orion spacecraft will land in the ocean and astronauts must perform a quick emergency escape. Astronauts must get out of their chairs, climb a ladder out of the capsule and get into a life raft — all difficult tasks after several months in zero-gravity environments. Microgravity is tough on astronauts' bodies and can deteriorate skeleton, muscle and cardiovascular systems.

There's an added challenge: Astronauts must do all of these tasks while inside a capsule that is rocking on the waves of an ocean. All in all, it creates a jolting return to earth.

"We want to determine if astronauts need to reserve a certain level of strength or cardiovascular capacity during flight so that they can land safely after a one- or two-year mission," Ade said. "The model capsule lets us test that in a way that is translatable and allows NASA to apply it directly to future missions."

Ade and the team are studying research participants as they perform the same tasks in the model capsule as astronauts would during an emergency escape. Participants wear special equipment that takes physiological measurements — such as muscle activity, oxygen uptake, heart rate and blood pressure — to determine what kind of stress the body experiences during an emergency escape.

The mock-up Orion capsule is constructed to the exact dimensions as the real version. The research team traveled to Johnson Space Center to make measurements, look at blueprints and develop a way to create the space capsule in Kansas. Local manufacturing companies helped with the design and frame. Once the capsule frame arrived at the Manhattan campus, the research team — including graduate and undergraduate students — finished the construction.

"We have a great group of graduate and undergraduate students who have come together and helped us with all aspects of this project, from construction to testing," Barstow said.

The project can help the general population as well. During deep space missions, astronauts must maintain their physical and cardiovascular capacity in a confined space with few medical resources. If the researchers can find possible interventions with these restrictions, they could apply the same methods to clinical patients or possibly geographic areas without access to medical facilities and resources.

"If we can figure out how to keep an astronaut healthy in this extreme environment, we can translate that to life on earth," Ade said. "This research is really helping both individuals: the astronaut and those here on Earth."

The research is a continuation of nearly 10 years of NASA-funded research to improve astronaut health and determine fitness standards.

"Our goal is to provide information on how fit an astronaut needs to be when they leave so that when they get to the destination or when they return to earth, they will be strong enough to perform mission tasks, even after several months in a zero-gravity environment," Barstow said.