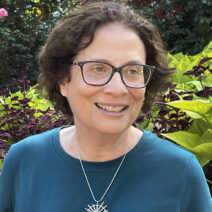 Newswise — Sandra Lynn Wolin was chosen by the Women in Cell Biology Committee (WICB) as the recipient of the 2021 Sandra K. Masur Senior Leadership Award for her dedication to mentorship, leadership, and science. Wolin is the chief of the RNA Biology Laboratory and senior investigator at the Center for Cancer Research at the National Cancer Institute (NCI), National Institutes of Health (NIH).

Wolin received the award during Cell Bio Virtual 2021, where she presented the talk “RNPs and autoimmunity: Coming full circle.” Her research focuses on the biogenesis and function of noncoding RNAs as well as the pathways by which cells recognize defective RNAs.

“We are particularly interested in understanding how the failure to degrade defective RNAs affects cell function and contributes to human disease,” Wolin wrote to ASCB.

Wolin is devoted to ASCB’s mission to increase diversity, equity, and inclusion in the scientific workplace. In 2004, she designed the Yale Department of Cell Biology’s mentoring program for junior faculty and was the head of this program until 2017, when she moved to NCI. This program was one of the first mentoring programs at the Yale School of Medicine. From 2014 to 2017, she served on the executive board of Yale’s Status of Women in Medicine Committee, a standing committee of the School of Medicine that addresses issues related to gender equality.

At the NCI, Wolin co-founded the Frederick Diversity Committee to support diverse trainees on the Frederick, MD, campus.

“The impetus was that there was no infrastructure at Frederick to support trainees who were members of groups that are underrepresented in science,” Wolin said. “This new initiative was immediately successful, as it provided a mechanism for trainees from across the campus to interact.”

In addition, Wolin said, the Frederick Diversity Committee sponsors monthly “Let’s Talk” seminars that address issues of interest to fellows, such as traditional and nontraditional career paths. It also organizes a “second mentor” program that pairs fellows with mentors outside their lab groups, and sponsors events that bring together fellows, staff, and PIs. Wolin has continued to support early-stage career faculty and currently serves on the mentoring committees of 10 young Investigators at the NIH.