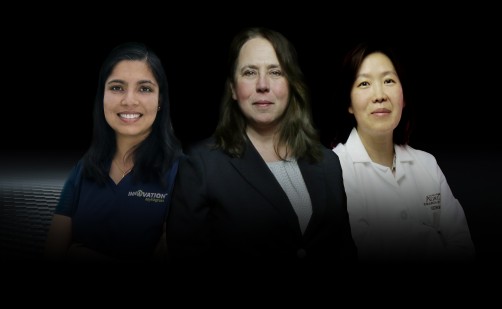 “We look at agriculture and ecology in terms of how they can support urban human development such that it yields low or even positive impacts on our environments and ecosystems,” said Dr. Jeanmarie Verchot, director of the Texas A&M AgriLife Research and Extension Center at Dallas.

Verchot took the helm as Dallas center director in 2017, where she also serves as principal investigator in a study to understand the cellular mechanisms that allow the spread of potato virus x and y. These pathogenic viruses cause a number of symptoms in potato, ultimately leading to crop losses and associated societal problems across the globe, Verchot said.

“These viruses, particularly potato virus y, are devastating to staple potato crops,” she said. “We’re working to understand them for an eventual means of controlling those viruses.”

Meanwhile across campus in Dallas, Dr. Qingyi Yu, principal investigator in the center’s genomics research program, continues follow-up research on a 2017 discovery that changed human understanding about the circadian clock and how it regulates water efficiency in some plants.

Yu’s ongoing initiatives focus on a gene her team believes could be a circadian oscillator — one piece of a complex mechanism that regulates gene activity based on time of day and Earth’s movements through space.

“We know genes express at specific times of day, but an actual mechanism or ‘circadian clock’ that regulates this has only been hypothesized to exist so far,” Yu said. “Discovering evidence of the circadian clock would represent a major scientific leap.”

Her laboratory also studies the genetic properties allowing some varieties of turfgrass to take up salt in the soil and expel excesses of the mineral through a gland in the leaf.

“The salt glands in turfgrasses also exist in some food plants, but are inactive in those crops,” Yu said. “This salt excretion might be useful to plants and soils where conditions are especially saline. We’re studying the genetic mechanisms that activate this ability.”

Chandra continues to focus on breeding hybrid turf varieties among her growing collection of more than 800 unique research specimens. Her program is a pioneering user of embryo rescue technique in turf breeding, which assists plant embryos to survive and grow as they might not be capable in nature.

This year, she said, her efforts in embryo rescue combine with a stronger emphasis on turfgrass genetics and technologies for more efficient research, namely unmanned aerial vehicles or drones.

Visit https://dallas.tamu.edu for more information on these programs and a comprehensive overview of AgriLife Research and AgriLife Extension programs in North Texas.