Wood on our Skin

Newswise — The idea of measuring parameters that are relevant for our health via the skin has already taken hold in medical diagnostics. Diabetics, for example, can painlessly determine their blood sugar level with a sensor instead of having to prick their fingers. Empa researchers, together with scientists from Canada, have now produced a novel flexible sensor that lies on the skin surface and is biocompatible because it is made of nanocellulose.

A transparent foil made of wood

Nanocellulose is an inexpensive, renewable raw material, which can be obtained in form of crystals and fibers, for example from wood. However, the original appearance of a tree no longer has anything to do with the gelatinous substance, which can consist of cellulose nanocrystals and cellulose nanofibers. Other sources of the material are bacteria, algae or residues from agricultural production. Thus, nanocellulose is not only relatively easy and sustainable to obtain. Its mechanical properties also make the "super pudding" an interesting product. For instance, new composite materials based on nanocellulose can be developed that could be used as surface coatings, transparent packaging films or even to produce everyday objects like beverage bottles.

Researchers at Empa's Cellulose & Wood Materials lab and Woo Soo Kim from the Simon Fraser University in Burnaby, Canada, are also focusing on another feature of nanocellulose: biocompatibility. Since the material is obtained from natural resources, it is particularly suitable for biomedical research.

With the aim of producing biocompatible sensors that can measure important metabolic values, the researchers used nanocellulose as an "ink" in 3D printing processes. To make the sensors electrically conductive, the ink was mixed with silver nanowires. The researchers determined the exact ratio of nanocellulose and silver threads so that a three-dimensional network could form.

The team finally succeeded in developing sensors that measure medically relevant metabolic parameters such as the concentration of calcium, potassium and ammonium ions. The electrochemical skin sensor sends its results wirelessly to a computer for further data processing. The tiny biochemistry lab on the skin is only half a millimeter thin.

While the tiny biochemistry lab on the skin – which is only half a millimeter thin – is capable of determining ion concentrations specifically and reliably, the researchers are already working on an updated version. "In the future, we want to replace the silver particles with another conductive material, for example on the basis of carbon compounds," Siqueira explains. This would make the medical nanocellulose sensor not only biocompatible, but also completely biodegradable. 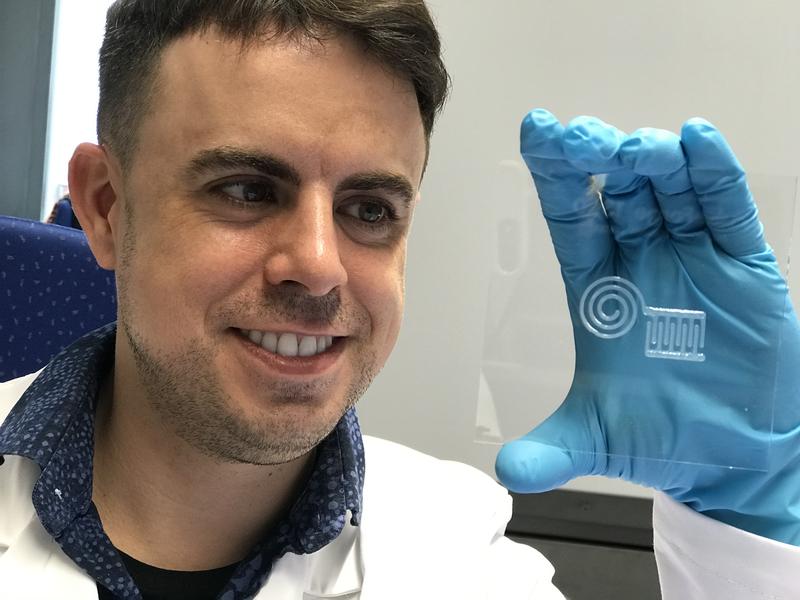 Caption: Using a 3D printer, the nanocellulose "ink" is applied to a carrier plate. Silver particles provide the electrical conductivity of the material.