Woodburn, Ore.: A Microcosm of Immigrant Shifts in America 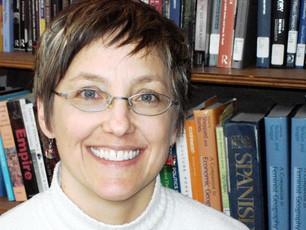 Lise Nelson of the University of Oregon's department of geography has documented changes involving farmworker housing and community acceptance in Woodburn, Ore., just south of Portland.

Newswise — Travelers on I-5 know that Woodburn, Ore., is home to the region's largest tax-free outlet center. A University of Oregon researcher, however, turns away from the mall to study the heart of town, which, she says, provides insight on how new immigrant settlement patterns are transforming place and identity in small- to medium-sized U.S. cities.

Details of the research by Lise Nelson, professor of geography, appeared in two recent journals, Geographical Review (October 2007) and Cultural Geographies (January 2008). The former examined migrant farmworkers and community relationships as they transitioned from a migratory workforce in isolated labor camps to having year-round roles in the economy and becoming permanent residents. The latter follows the friction between an advocacy group's efforts to build new housing in the 1990s and resistance from mostly white residents and city officials.

Many of the changes detailed were fueled by globalization in the 1980s, Nelson said. Mexico faced an economic crisis, the U.S. economy became service-oriented and created a demand for low-wage workers, and the Immigration Reform and Control Act of 1986 allowed millions of undocumented workers with long employment histories to become legal workers. These events, in turn, allowed more family members to migrate and join the workers. The dynamics expanded already well-established labor flows between Mexico and the United States.

Economic changes in the northern Willamette Valley in the 1980s also contributed to increasing numbers of immigrant farmworkers arriving and settling in Woodburn. The expansion of the greenhouse and nursery industry, agricultural processing plants, the Christmas tree industry and a transition to immigrant tree planters in public and private reforestation activities combined to create nearly year-round demand for immigrant workers, mostly from Mexico.

While Nelson's research is on Woodburn, a city of 20,000 people just south of Portland, similar changes occurred in nearby Gervais and Canby and many other non-metropolitan cities. The 2000 census found Woodburn to be the largest Oregon city with a majority population of Latinos.

"Woodburn is a place that represents a microcosm of the broader-scale migration and settlement dynamics that are changing small- and medium-sized towns throughout the United States," Nelson said. "Woodburn's farmworker housing struggle in the 1990s offers a window into the shifting dynamics of belonging and identity in these contexts.

"The housing struggle reflected a deep resistance on the part of some white residents to the presence of Mexican immigrants, yet today we see, at least on an official level, a more active embracing of Woodburn's multicultural identity. A few years ago Woodburn inaugurated, as its first urban renewal project, a downtown plaza, designed in a Latin-American style," Nelson said. "For several years now the city has helped organize a community celebration of Mexican Independence Day. This is not to say the picture is all rosy, as racism and discrimination against immigrant residents have not disappeared, but there have been public and visible changes."

Nelson collected data from archived newspaper articles, public records and personal interviews done in English and Spanish. Her research follows shifting politics and immigration, as well as economic changes that drive both. She has done extensive research in Mexico, especially in MichoacÃ¡n, within migrant-sending communities.

Mexican workers came in large numbers to the northern Willamette Valley in the 1940s under the U.S.-sponsored Bracero Program to alleviate World War II labor shortages. The workers often lived in cramped, ill-equipped labor-camps. By the 1950s and 1960s, most farmworkers were Mexican-American citizens coming from border areas on a seasonal basis. The rural labor force shifted again by the late 1970s, when large numbers of workers again began arriving from Mexico. By the 1990s, the trend saw more immigrants seeking employment in smaller cities rather than large gateway cities such as Los Angeles and Chicago.

During the 1980s as farmworkers workers sought housing in Woodburn, Nelson found, they often were crowded into single-family housing units or lived in garages and cars. Landlords often charged for entire families to live in one room; multiple families shared bathrooms, living rooms and kitchens. Overcrowding created unsafe conditions, fostered social tensions and led to housing decay. Few residents were pleased, Nelson noted. Longtime residents, both white and Mexican-American, reported plummeting living conditions, and immigrant families were concerned about the effects on their children and family life.

In response, a coalition of advocacy groups formed the Farmworker Housing Development Corp. (FHDC) in 1991 to build safe and affordable housing. With bank loans and grants, FHDC sought to take over a failed Housing and Urban Development-funded site to build an apartment complex with rents scaled by income. Although this appeared to be a win-win situation, Nelson said, the city, which was forced to foreclose on the property after a private developer went bankrupt, resisted the proposal for two years before giving to avoid paying $245,000 to the government.

Nelson's study provides insight to the battle. FHDC eventually prevailed and opened Phase 1 of the Nuevo Amanecer (New Dawn) complex in August 1994. "Nuevo Amanecer created living space for farmworkers that contrasted sharply with traditional farmworker housing," Nelson noted in Geographical Review. "It enacted a spatial claim to place and belonging in the community for farmworkers who had historically been relegated to the labor camp. FHDC staff worked with residents to generate rules governing the complex, from security to garbage-collection schedules."

FHDC's efforts to build another complex also met with resistance. In 1995 FHDC purchased, to the city's surprise, an abandoned lot near Woodburn City Hall. Again, the city balked and stalled its approval, but, again, FHDC won and opened Esperanza (Hope) Court in October 1997. The FHDC later won awards for its design and operation of the complexes.

"I talked to some residents in Woodburn who had originally opposed the housing projects," Nelson recalled. "They said that they thought there would be gangs, more trash and more problems. Instead, they found them to be well run and a nice place for families -- with a lot of participation by residents. It is seen by many as a really innovative and successful program." The September 2005 dedication of the downtown plaza, she added, "indicated a shift in who is seen as belonging in the community, and the nature of the town's 'place identity' itself."

"Woodburn's housing struggle," she said, "offers a window into the shifting dynamics of belonging and identity between white residents and Latinos, including Mexican-American and Mexican immigrants. These inter-group dynamics are now more accommodating, more understanding and more accepting of differences, even though not all racial tensions are gone."

The Woodburn Area Chamber of Commerce proclaims the city's diversity on its Web site, noting the city has "grown up a lot," is one-half Hispanic, one-fifth Russian and one-quarter senior citizen. "People of all ages and all cultures have come together to know Woodburn as the City of Unity, a place where they can celebrate their differences and share their cultural heritage," the site says.

In the Cultural Geographies paper, Nelson concludes that "the political and economic power structures remain overwhelmingly white ... But constructions of place identity and the public sphere in Woodburn have become decidedly more pluralistic, partly, I think, as a result of the successful struggles such as those to build Nuevo Amanecer and Esperanza Court." She predicts that over time the town's power structure will become more pluralistic as well.