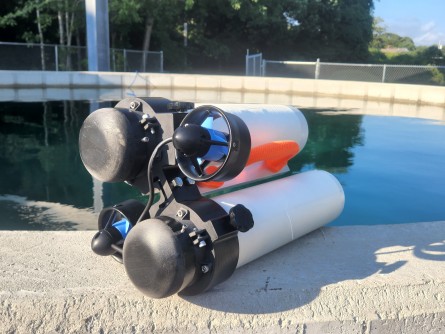 A WHOI-led team developed an automated underwater seaweed seed-string deployment device (patent pending) with potential to reduce labor needs on seaweed farms in Kodiak, Alaska. Multiple devices may be used at the same time to further increase efficiency of the farm seeding process. 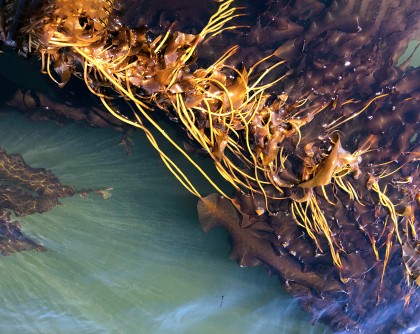 A strand of sugar kelp being experimentally farmed in New Castle, NH. Kelp and other seaweeds provide essential micronutrients and bioactive compounds for human health. A WHOI-led research team is exploring methods for selecting, breeding, and improving sugar kelp production by propagating sporeless, or infertile, offspring.

The Gold Innovation Award was presented to a collaborative research team led by WHOI research specialist Scott Lindell, including experts from the University of Connecticut and University of Southern California, and offers methods for selecting, breeding, and improving sugar kelp production by propagating sporeless, or infertile, offspring.

Infertility is an important management feature for breeding programs because most national and state regulators are not yet prepared to permit selectively bred farmed strains for fear they may impact natural resources. Currently, there is limited understanding of the probability of interbreeding between wild kelp and selectively improved strains, and the possible effect on the wild. So far, Lindell and the team have tested 25 assumed sterile strains, and two have been either late ripening or sterile. They also have a patent pending that covers the method for making infertile kelp via identification of natural mutations controlling fertility.

“​​In order for US kelp farms to continue growing and competing internationally, modern plant breeding, genetics, and agronomic practices must be adopted in an environmentally-responsible way,” said Lindell. “In this case, infertility is a desired outcome, and our selective breeding and sporeless kelp innovation (and the associated open-source tools we have developed) could transform the industry, enable the expansion of profitable production in the Northeastern US, and serve as a model for other regions of the world.”

“With this scientific information, we will develop a public education and communication program about our research results, and demonstrate how they are relevant to social policy, and commercial licensing,” said Lindell.

Also at the Seagriculture Awards, the Silver Innovation Award was given to a collaborative research team led by WHOI research associate David Bailey, including WHOI engineers Robin Littlefield and Ben Weiss. The team developed an automated underwater seaweed seed-string deployment device (patent pending) with potential to reduce labor needs on seaweed farms in Kodiak, Alaska. The device, funded by the Pacific States Marine Fisheries Commission: 2020 Marine Pilot RFP Selected Project, has two seed-spools which are loaded on an automated line seeder and attached to the grow-line with quick-connect clips. The tail end of the seed-string is fixed to the rope, and the thrusters are activated with a waterproof switch. When the device reaches the end of the grow-line, the thrusters are deactivated, allowing a farmer on the opposite side to secure the seed-string and detach the device. The farmer then attaches the device to the next line and the process repeats in the reverse direction until the entire farm is seeded. Multiple units may be used at the same time to further increase efficiency of the farm seeding process.

“This device eliminates the need for grow-line attachment and detachment which will allow the farmers to seed much faster than traditional methods,” said Bailey. “The proposed method will substantially lessen the time the seed spool spends in the air, reducing the time of exposure to the elements from minutes to seconds to increase seedling survivability. Removing the above-surface component from seeding will also increase the weather window in which seeding can occur. The use of multiple self-spooling systems will reduce the number of boat trips back and forth along the length of the farm for a greater savings in time, fuel, and reduced wear on equipment.”

Woods Hole Oceanographic Institution (WHOI) is a private, non-profit organization on Cape Cod, Massachusetts, dedicated to marine research, engineering, and higher education. Established in 1930, its mission is to understand the ocean and its interactions with the Earth as a whole, and to communicate an understanding of the ocean’s role in the changing global environment. WHOI’s pioneering discoveries stem from an ideal combination of science and engineering—one that has made it one of the most trusted and technically advanced leaders in fundamental and applied ocean research and exploration anywhere. WHOI is known for its multidisciplinary approach, superior ship operations, and unparalleled deep-sea robotics capabilities. We play a leading role in ocean observation and operate the most extensive suite of ocean data-gathering platforms in the world. Top scientists, engineers, and students collaborate on more than 800 concurrent projects worldwide—both above and below the waves—pushing the boundaries of knowledge to inform people and policies for a healthier planet. Learn more at whoi.edu.