World Environment Day on the Roof of the World 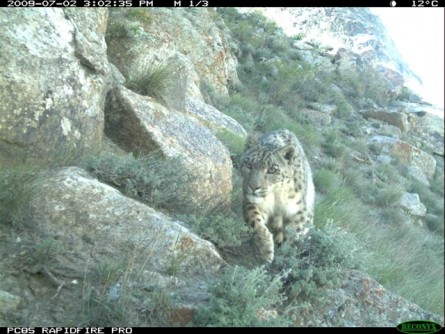 Snow leopard from Afghanistan’s Wakhan District – known locally as the “Roof of the World.” Credit: WCS

Newswise — NEW YORK (June 5, 2014) — World Environment Day, held today is a global event, but perhaps the most remarkable celebration will be held among the high, snow-capped mountains and lush valleys of Wakhan District in Afghanistan.

This area, known locally as the ‘Roof of the World,’ is mostly above 4,000 meters (13,000 feet). It is the most remote and isolated part of the country, and its inhabitants are some of the poorest in the world. The region also home to some of Afghanistan’s most breathtaking scenery and globally important wildlife such as snow leopards, lynx, brown bear, Marco Polo sheep, Siberian ibex, and wolf. In recognition of this importance, the entire 10,000 square kilometer (3,861 square miles) district was recently announced as Afghanistan’s second protected area – Wakhan National Park. On June 5, a World Environment Day delegation led by Prince Mostapha Zaher, Director-General of Afghanistan’s National Environment Protection Agency (NEPA), along with representatives of the Afghan Ministry of Agriculture, Irrigation and Livestock (MAIL) and the Wildlife Conservation Society (WCS) will celebrate with members of the Kyrgyz communities by the alpine shores of Lake Chaqmaqtin in the remote, rarely-visited Little Pamir region.

In partnership with the people of Wakhan, WCS, MAIL, and NEPA have embarked upon a program of bringing development to the area through wildlife conservation and sustainable management of the area’s natural resources. NEPA Director-General Zaher said, “Afghanistan is a country of stunning natural beauty and the people of Afghanistan are serious about their responsibility for protecting this beauty. NEPA’s recent announcement of the Wakhan National Park came after the people of this area requested help in preserving their environment. We are celebrating World Environment Day here in their honor, and in tribute to our country’s natural heritage.”

Joe Walston, WCS Executive Director of Asia Programs, said: “With the great majority of Afghanistan’s population dependent on natural resources, people’s livelihoods and the nation’s economy depends on protection and proper management of the environment. The celebration of World Environment Day in Wakhan shows Afghanistan’s commitment to conservation as the key to reconstruction and the foundation for the country’s future.”

NEPA, WCS and MAIL have been working with local Kyrgyz communities over the last two years to establish a wildlife reserve in Teggermansu, a secluded valley in Wakhan that is a critical habitat for giant, spiral-horned Marco Polo sheep, a favorite prey species for the endangered snow leopards in these stunning mountains. With the full participation of the local communities, the wildlife reserve has been demarcated and a management plan is under development. In March of this year, this ground breaking initiative was dramatically enhanced by the historic declaration of the entire Wakhan District as Afghanistan’s second National Park. This vast area, will incorporate Teggermansu Wildlife Reserve as a zone for the strict protection of wildlife. Richard Paley, Director for the WCS Afghanistan Program, said “Afghanistan is known for recent decades of conflict, but it still has significant populations of wildlife such as snow leopards and Marco Polo sheep. The government and people of Afghanistan have made significant strides in protecting these key landscapes and wildlife for posterity, and we are privileged to be a part of this important process.”

WCS, primarily with USAID support, has been helping Afghanistan conserve its unique natural heritage since 2006. WCS works with nearly 100 rural communities on sustainable management, has helped the government draft and implement environmental legislation, performed the first wildlife surveys and focused research in over 30 years, trained and deployed over 100 community rangers to monitor and protect wildlife and rangelands, and helped Afghanistan create its first protected area – Band-e-Amir National Park, -- in 2009, and its second – Wakhan National Park – earlier this year.