World’s Most Endangered Alligator Making a Comeback – in Shanghai 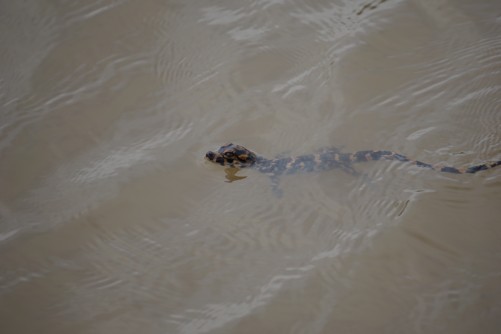 Newswise — WCS (Wildlife Conservation Society) reports that eggs of critically endangered Chinese alligators discovered recently in a nest in a Shanghai wetland park have hatched and that baby alligators have been photographed and identified swimming in the area. The announcement signals a huge success for the species and for ongoing reintroduction efforts initiated by East China Normal University, Chongming Dongtan Wetland Park, and WCS with the help of U.S. zoos including WCS’s Bronx Zoo, and the Saint Augustine Alligator Farm Zoological Park.

“This shows that even the most endangered wildlife can recover if given a chance,” said Aili Kang, WCS Executive Director for Asia Programs. “Without the efforts of our partners and colleagues in China, we wouldn’t have had this great outcome that demonstrates that people and predators can co-exist in one of the most densely populated regions of the world.”

WCS scientists Steven G. Platt, Fenglian Li, and Maggie He originally discovered three nests, with more than 60 viable eggs laid over a period of about two weeks. Unfortunately, two of the nests were lost to flooding spawned by a typhoon in mid-September and the fate of the third nest’s hatchlings was unclear. However, Mr. Wang Jiang Tao from Dongtan Wetland Park observed three baby alligators on September 25th and Mr. Yu Feng from East China Normal University photographed the animals on the 27th.

The Chinese alligator (Alligator sinensis) is one of only two species of alligator in the world. Fewer than 150 remain in the wild in China, and these occur in small populations at widely scattered locations. Habitat availability limits potential expansion of these populations, none of which numbers more than about 20 alligators. Meanwhile the American alligator (Alligator mississippiensis) is considered one of the great conservation success stories, having recovered from overhunting and habitat loss in the last century. They were removed from the endangered species in 1987 and are now considered abundant throughout their range in the southeastern U.S.

Said Jim Breheny, WCS Executive Vice President and Director of WCS’s Bronx Zoo: “The release of zoo-bred Chinese alligators to re-establish a breeding population of this endangered crocodilian is a great example of how zoos are playing a major role in conservation efforts around the world. The Bronx Zoo is proud to be a part of the effort to save this critically endangered species from the brink of extinction.”

The Bronx Zoo currently has two Chinese alligators at the zoo’s Reptile House.

This work is made possible through the State Forestry Administration of China, East China Normal University and Shanghai Dongtan Wetland International Co., LTD.