The National Science Foundation has awarded $11.8 million to Rutgers to launch and operate the Oceans Observatories Initiative’s data system.

16-May-2016 8:00 AM EDT, by Rutgers University's Office for Research
favorite_border 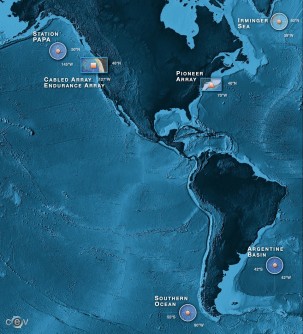 Ocean Observatories Initiative and the Center for Environmental Visualization, University of Washington

The OOI's seven arrays are deployed in key locations in the Atlantic and Pacific oceans. 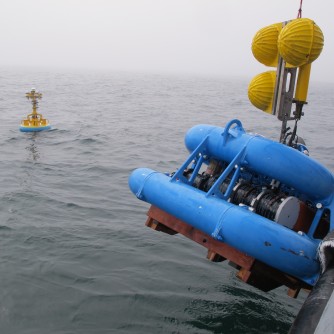 Deployment of the Endurance Washington Inshore Surface Mooring in October 2014 off Grays Harbor, Washington. The device in the foreground contains seafloor instruments and the mooring anchor. The surface buoy of the mooring, which contains the communications equipment and surface instrumentation, is visible in the background.

Newswise — NEW BRUNSWICK, N.J. – The data center for the pioneering Ocean Observatories Initiative, which collects and shares data from more than 800 sophisticated instruments and a transmission network across the Atlantic and Pacific oceans, is now operating at Rutgers University.

Funded by the National Science Foundation (NSF), the Ocean Observatories Initiative (OOI) is collecting, processing and sharing vast amounts of data on the oceans. The Rutgers team, which includes the Rutgers Discovery Informatics Institute and Rutgers University Center of Ocean Observing Leadership, was awarded an initial two-year, $11.8 million contract by the NSF-funded Ocean Observatories Initiative (OOI) project management office to design, build and now operate the OOI cyberinfrastructure. OOI has an intended lifetime of 25 years.

“Rutgers is now the hub for the world’s richest source of new in-water oceanographic data, and we are extremely proud to have been chosen for this important work,” says Christopher J. Molloy, Rutgers’ senior vice president for research and economic development. “NSF deserves great credit for creating a powerful research and educational tool with such unprecedented scope. Our university is committed to meeting this responsibility.”

The Rutgers team worked with Raytheon and Applied Science Associates to complete the design and construction of the OOI cyberinfrastructure, which includes data acquisition and processing, data quality control and storage and data dissemination. The system includes the OOI Data Portal, which provides access to the OOI data in a variety of formats, with advanced graphic visualization, to anyone with an Internet connection.

The primary users are expected to be scientists and educators worldwide at colleges and universities, K-12 schools and research institutions. The data-collection network and systems for OOI are being managed by Oregon State University, the University of Washington and Woods Hole Oceanographic Institution. The OOI project is managed by the Consortium for Ocean Leadership. Greg Ulses is the project director.

More than 20 Rutgers employees are engaged in OOI, which became fully operational in early 2016. Their work provides a network that will permit 24/7 connectivity and bring sustained, reliable worldwide ocean observing data to a user any time, any place, on any computer or mobile device.

The OOI’s hardware consists of more than 800 various sensors, moorings, autonomous undersea gliders and seafloor cables deployed in seven arrays at key locations in the Pacific and Atlantic oceans. The hardware generates a large variety and amount of information, images and video. The project is a networked observatory of science-driven sensor systems to measure the physical, chemical, geological and biological variables of the ocean, seafloor and near-ocean atmosphere.

The OOI cyberinfrastructure team is led by Manish Parashar, distinguished professor of computer science and founding director of the Rutgers Discovery Informatics Institute (RDI2), in collaboration with Scott Glenn and Oscar Schofield, distinguished professors of marine and coastal sciences and directors of the Rutgers University Center for Ocean Observing Leadership (RU COOL). The Rutgers team brings a comprehensive approach to the OOI cyberinfrastructure by using the expertise of both computer scientists and oceanographers.

“What’s most exciting about OOI is the transformative impact that it will have on marine science by providing researchers, educators and students around the world access to data that was previously accessible by only a very few individual and institutions,” noted Parashar. “RDI2 is a leader in advanced cyberinfrastructure and computational and data-enabled science and engineering, and we have assembled a unique, multidisciplinary team at Rutgers to address the challenges posed by the scope and scale of the marine instrumentation and the data, and the wide range of research needs.”

Glenn and Schofield – world-renowned oceanographers – were among the leaders in conceiving and developing the Ocean Observatories Initiative. Their focus has been on developing ocean omnipresence through remote and robotic technologies deployed in the polar, temperate and tropical seas.

"Our OOI partners have deployed advanced platforms and a wide variety of sensors in challenging environments at sea,” Glenn said. “Enabling unprecedented access to scientists and educators through an equally advanced cyberinfrastructure is our goal. We are excited that Rutgers is part of the team."

About Rutgers – Rutgers, The State University of New Jersey, is a leading national research university. Established in 1766 and celebrating a milestone 250th anniversary in 2016, the university is the eighth oldest higher education institution in the United States. More than 67,000 students and 22,000 faculty and staff learn, work, and serve the public at Rutgers locations across New Jersey and around the world. Rutgers University–New Brunswick is the only public institution in New Jersey represented in the prestigious Association of American Universities. Rutgers is a member of the Big Ten Conference and its academic counterpart, the Committee on Institutional Cooperation, a consortium of 15 world-class research universities. Rutgers is among the top 20 public universities nationally for total R&D funding and achieved an 18.3% increase in overall funding for research and sponsored programs in the last fiscal year over the previous year, from $518 million in fiscal year 2014 up to $613 million last year. The Office of Research and Economic Development is a central point for industry to access Rutgers and offers a website designed for the business community, businessportal.rutgers.edu. 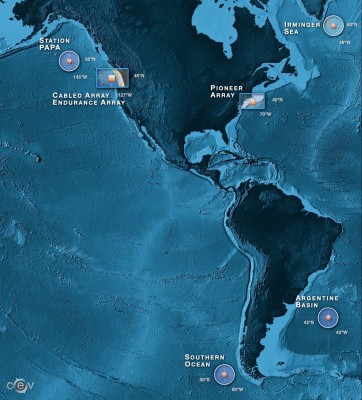 Credit: Ocean Observatories Initiative and the Center for Environmental Visualization, University of Washington

Caption: The OOI's seven arrays are deployed in key locations in the Atlantic and Pacific oceans. 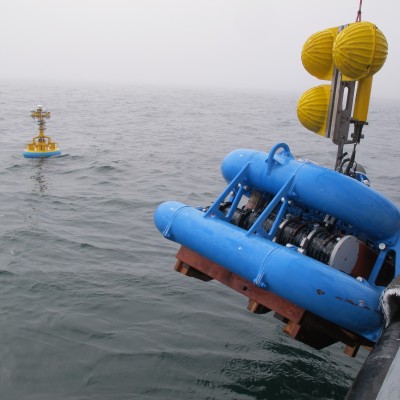 Caption: Deployment of the Endurance Washington Inshore Surface Mooring in October 2014 off Grays Harbor, Washington. The device in the foreground contains seafloor instruments and the mooring anchor. The surface buoy of the mooring, which contains the communications equipment and surface instrumentation, is visible in the background.