David Prezant, M.D., discusses his new research on increased cancer risk for firefighters who worked at the World Trade Center site following the 9/11 attacks. Dr. Prezant is professor of medicine at Albert Einstein College of Medicine of Yeshiva University, an attending physician in the pulmonary medicine division at Montefiore, the University Hospital and academic medical center for Einstein, and chief medical officer of the Fire Department of the City of New York. 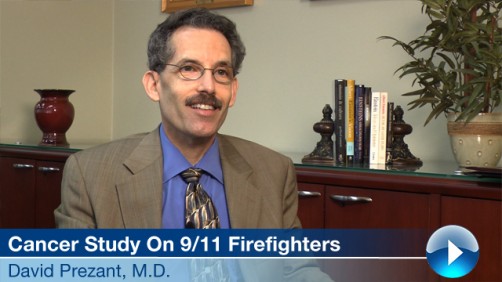 Newswise — September 1, 2011 – (BRONX, NY) – In the largest cancer study of firefighters ever conducted, research published in this week’s 9/11 Special Issue of The Lancet found that New York City firefighters exposed to the 9/11 World Trade Center (WTC) disaster site were at least 19 percent more likely to develop cancer in the seven years following the disaster as their non-exposed colleagues and up to 10 percent more likely to develop cancer than a similar sample from the general population.

The study evaluated the health of 9,853 WTC-exposed and non-exposed firefighters over the seven years following 9/11. The senior author was David Prezant, M.D., professor of (http://www.einstein.yu.edu/medicine/medicine.aspx) medicine at Albert Einstein College of Medicine of Yeshiva University, an attending physician in the pulmonary medicine division at Montefiore, the University Hospital and academic medical center for Einstein, and chief medical officer of the Fire Department of the City of New York (FDNY). His co-authors were from Einstein, Montefiore and FDNY.

The terrorist attacks on the WTC on September 11, 2001 created an unprecedented environmental disaster in the New York City area. Many first responders, including about 12,500 FDNY firefighters, were exposed to potentially hazardous aerosolized dust consisting of pulverized cement, glass fibers, asbestos, lead, polycyclic aromatic hydrocarbons, polychlorinated biphenyls, and polychlorinated furans and dioxins produced as combustion byproducts from the collapsed and burning buildings. They were also exposed to potentially toxic fumes—initially from burning jet fuel and, during the 10-month recovery effort, from diesel smoke emitted by heavy equipment. Dr. Prezant has previously published several studies regarding the lung health of WTC-exposed first responders. The Lancet study was the first effort to assess the incidence of cancer among an entire WTC-exposed cohort―in this case WTC-exposed firefighters.

In a report published two months before The Lancet study, the National Institute for Occupational Safety and Health (NIOSH) concluded that evidence at that time did not demonstrate a causal association between exposures resulting from the attacks on the WTC and cancer occurrence in responders and survivors. For this reason, the WTC Health Program determined that “insufficient evidence” existed to add cancer to the List of WTC-Related Health Conditions. The Lancet study authors expect this new study will feature prominently in the next NIOSH WTC cancer report scheduled for 2012.

In explaining how exposure to WTC dust apparently led to an overall increase in cancer incidence among WTC-exposed firefighters, Dr. Prezant called the finding surprising due to the short latency period but “biologically plausible” because WTC exposure included polycyclic aromatic hydrocarbons, polychlorinated biphenyls and dioxins—all known carcinogens. He noted that WTC exposure also caused chronic inflammation and that such inflammation “has been implicated as a risk factor for cancer in experimental and epidemiological studies.”

The study’s results, said Dr. Prezant, “support the need to continue monitoring firefighters and others who responded to the World Trade Center disaster or participated in recovery and cleanup at the site. This monitoring should include cancer screening and efforts to prevent cancer from developing in exposed individuals.”

For members of the media who would like to request an interview, please contact the FDNY Press Office at 718-999-2056 or via email at fdnyopi@fdny.nyc.gov.

###About Albert Einstein College of Medicine of Yeshiva Albert Einstein College of Medicine of Yeshiva University is one of the nation’s premier centers for research, medical education and clinical investigation. During the 2010-2011 academic year, Einstein is home to 724 M.D. students, 256 Ph.D. students, 122 students in the combined M.D./Ph.D. program, and 375 postdoctoral research fellows. The College of Medicine has 2,770 fulltime faculty members located on the main campus and at its clinical affiliates. In 2009, Einstein received more than $135 million in support from the NIH. This includes the funding of major research centers at Einstein in diabetes, cancer, liver disease, and AIDS. Other areas where the College of Medicine is concentrating its efforts include developmental brain research, neuroscience, cardiac disease, and initiatives to reduce and eliminate ethnic and racial health disparities. Through its extensive affiliation network involving five medical centers in the Bronx, Manhattan and Long Island – which includes Montefiore Medical Center, The University Hospital and Academic Medical Center for Einstein – the College of Medicine runs one of the largest post-graduate medical training programs in the United States, offering approximately 150 residency programs to more than 2,500 physicians in training. For more information, please visit www.einstein.yu.edu.