Worms Do Calculus to Find Meals Or Avoid Unpleasantness 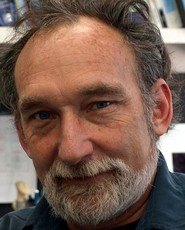 University of Oregon biologist Shawn Lockery and colleagues have isolated a pair of neurons that act in tandem, but with opposite effects, to regulate behavioral responses of worms based on smell or taste.

Newswise — Thanks to salt and hot chili peppers, researchers have found a calculus-computing center that tells a roundworm to go forward toward dinner or turn to broaden the search. It's a computational mechanism, they say, that is similar to what drives hungry college students to a pizza.

These behavior-driving calculations, according to a paper published in the July 3 issue of the journal Nature, are done "in a tiny, specialized computer inside a primitive roundworm," says principal investigator Shawn Lockery, a University of Oregon biologist and member of the UO Institute of Neuroscience.

In their paper, the researchers documented how two related, closely located chemosensory neurons, acting in tandem, regulate behavior. The left neuron controls an on switch, while the opposing right one an off switch. These sister neurons are situated much like the two nostrils or two eyes of mammals. Together these neurons are known as ASE for antagonistic sensory cues.

It's possible, Lockery said, that the discovery someday could help research aimed at treating at least some of the 200,000 people in the United States who annually seek medical treatment, according to records of the National Institutes of Health, for problems involving taste and smell.

"This computer does some nice calculus, differentiating the rate of change of the strength of various tastes," Lockery said. "The worm uses this information to find food and to avoid poisons."

Lockery and colleagues predicted the existence of a derivative-crunching mechanism in the Journal of Neuroscience in 1999 based on findings that nematodes change directions based on taste and smell.

"In effect, they have two nostrils or two tongues but they are so close together that it is really like having one nostril or one tongue, and yet they find their way around quite effectively," Lockery said. "We knew from behavioral experiments that nematodes were doing the same thing that humans were doing, but only from the view of behavioral responses. We didn't know what was going on in the brain."

To get there, Lockery and colleagues used new imaging and molecular tools, along with some genetic engineering of their worms.

Researchers found that when concentrations of salt were high, fluorescent proteins change from blue to yellow, showing that the left neuron (ASEL) was active as the worms continued forward movement. When salt levels were reduced, the right neuron (ASER) activated but generated a different behavior; the worms began a turning, or searching, motion.

"At this point, we wanted to know if these neurons really are controlling behavior. If ASEL really signals that things are getting better, then, if you could artificially activate ASEL the animals ought to go straight like a human going directly toward the pizza," Lockery said. "Conversely, if you activate the ASER the animals ought to turn to find their goal."

Such was the case, according to the capsaicin-receptor experiment. When the pepper ingredient was spread on turning worms with receptor proteins in the left neuron, they straightened their motion. Likewise, capsaicin applied to worms with the receptors in their right neurons caused them to change from turning motion to forward crawling.

"We have discovered a tiny, specialized computer inside a primitive round worm," Lockery said. "The computer calculates the rate of change of the strengths, or concentrations, of various tastes. The worm uses this information to find food and to avoid poisons."

Evidence for such on and off switching cells in other chemosensory networks of mammals, he added, "There are strong indications that a similar device exists in the human nervous system."

Five co-authors with Lockery on the Nature paper were: Hiroshi Suzuki and William R. Schafer, both of the University of California, San Diego; Tod R. Thiele and Serge Faumont, both of the UO Institute of Neuroscience; and Marina Ezcurra of the Medical Research Council's Laboratory of Molecular Biology in Cambridge, UK. Suzuki and Schafer currently are with the Center for Research in Neurodegenerative Diseases at the University of Toronto.