Worried about the supply chain? Here are the 5 commodities that will be hardest to find 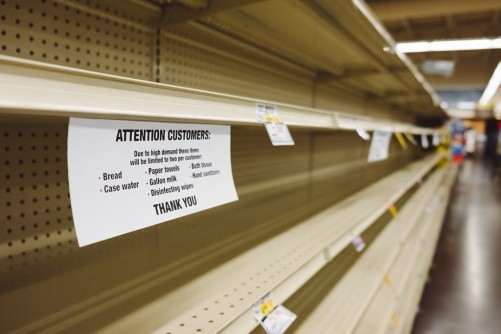 Panicked purchasing, empty store shelves, long lines at the gas station—given supply chain woes, is that America for the foreseeable future? Yes and no, said one supply chain expert—and also maybe. The global supply chain is a complicated mechanism that can be upset by a few isolated breakdowns, but it also is predictable and resilient enough that knowing what to look for can help countries, communities and individuals reduce negative effects.

Because of “supply elasticity,” semiconductors and goods that use computer chips are in short supply. It takes several years and lots of investment to build a semiconductor plant, so it's nearly impossible to increase supply when demand spikes, as it did this year. The goods most at risk aren't computers and high-tech gadgets, which use the newest chips, but rather "medium-tech" goods like cars that use older chips, for which the supply is fixed.

These items, like fuel, soap and toilet paper, are at risk because of hoarding behaviors, which happen in small ways when a storm is heading toward an area and happened nationwide in the early months of the pandemic. If a picture of a bare shelf makes it onto social media, people tend to rush out and buy extra—which creates a temporary shortage for no good reason. Hoarding thus creates a self-fulfilling prophecy. There was never a real shortage of toilet paper supply in 2020—people simply bought more than they needed or even could use and piled it in their closets. Resist the temptation to hoard if someone mentions a shortage. Instead, store away a little extra today to be prepared. That way you'll be part of the solution, not part of the problem.

Imported goods that need to be shipped across an ocean or across borders may be in short supply  because sudden border closures can combine with congestion at ports and border crossings to create delays. You've already been reading about delays for Christmas shopping—these delays are real, especially for goods (like washing machines and bicycles) coming in from China on container ships through the Port of Los Angeles.

Fuels like natural gas, fuel oil and coal are at risk because the arrival of winter has coincided with the COVID era's reduced production capacity in the field and with unexpected shortfalls in renewable electrical power generation, which require burning fuel to replace solar and wind. Fuel won't run out, but this collision of events may mean fuel—and thus heating and power bills—is much more expensive for a while.

Despite the steals and deals you can get if you’re willing to look, commercial air travel in general is likely to be more expensive and more unpredictable for the foreseeable future because staffing shortages are leading to large numbers of unexpectedly canceled flights. Airlines aren't as flexible in their operations as many other companies; being a server short at a restaurant would simply make service a little slower, but missing pilots or mechanics lead directly to cancelations due in part to federal safety regulations. There's a higher than normal chance that your travel plans will be disrupted unexpectedly this year.

Data scientist Ben Ruddell is director of the FEWSION project at Northern Arizona University and a leading expert on supply chains. Ruddell directs the $4 million FEWSION project funded by the National Science Foundation. FEWSION has built the first complete empirical description (with correlating maps) of the U.S. food, energy and water system supply chain (the FEW Nexus) so every citizen and policymaker can see from where their food, water, fuel and a total of 46 different commodities come. He is also a professor and director of the School of Informatics, Computing, and Cyber Systems at NAU, known for its top scientific research programs. He has also led research projects funded by NASA, USDA, USGS, the Department of Defense, private foundations and several cities.