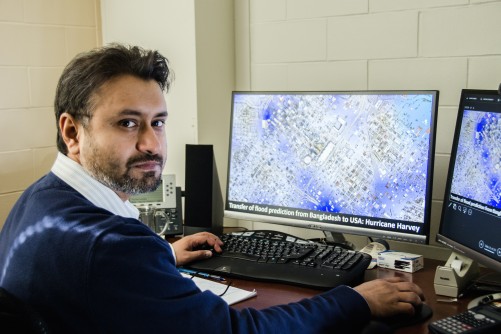 Newswise — MORGANTOWN, W.Va.—Antar Jutla, assistant professor of civil and environmental engineering at West Virginia University, has earned a prestigious CAREER award from the National Science Foundation for his research on how extreme events and enhanced climatic variability impact the emergence of water-borne pathogens that cause infection in humans. The award comes with nearly $500,000 in funding over a five-year period.

Yemen and Haiti are just two of a growing number of countries that are facing humanitarian crises due to escalations in cholera cases. In Yemen alone, the International Committee of the Red Cross announced that the number of suspected cholera cases in the war-torn had reached one million in less than nine months.

According to Jutla, there are several issues that have led to the rapid spread of this disease, which is 100 percent preventable and treatable.

“Aging and deteriorating civil infrastructure is the major road block to combat diseases such as cholera,” said Jutla. “A natural disaster usually destroys fragile infrastructure, which causes people to interact with water that is already contaminated with pathogens.”

Jutla and the members of his research team, which include WVU students at both the graduate and undergraduate levels, will analyze satellite data to create models that predict the distribution of pathogenic cholera bacteria. The goal is to determine potential new regions with elevated risk of disease outbreak where increases in climatic variability intersect with extreme natural events.

“The research is intended to provide a quantitative baseline framework, potentially applicable on a global scale, to assess the occurrence and spread of pathogens in the environment and human population,” Jutla said. “This can aid policymakers, aid organizations and governmental health agencies in the preparation of disease mitigation strategies. The computational infrastructure developed through this research will be made available to a wide array of students who have interest in public health, climate modeling and hydroclimatology.

“One of the biggest challenges that we are likely to face is from changes in frequency of Atlantic hurricanes,” Jutla continued. “Tools and algorithms developed in this project will aid in determining policies to develop resilient and robust civil infrastructure.”

“Dr. Jutla’s research work covers topics in the nexus of hydroclimate, environment and human health,” said Hema Siriwardane, department chair. “His research interests include remote sensing of hydrologic processes, food security, human nutrition and water governance, and he has developed a strong research program linking water resources and human health. His research work also has an international component, which has brought visibility to our graduate program. This award will contribute to increasing the number of graduate students and improving the national and international visibility of the Department.”

The NSF’s Faculty Early Career Development, or CAREER, program supports junior faculty who exemplify the role of teacher-scholars through outstanding research, excellent education and the integration of education and research within the context of the mission of their organizations. This is the eighth straight year that a member of the Statler College of Engineering and Mineral Resources faculty has been selected to receive this honor.

“Dr. Jutla is just the latest in what has become a long list of Statler College faculty to earn this prestigious award from the National Science Foundation,” said Gene Cilento, Glen  H. Hiner Dean of the Statler College. “His work has the ability to affect countless numbers of people across the globe in life-saving ways.”