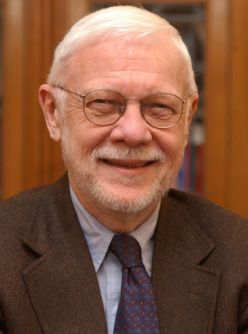 Butler will present his lecture, “Protestantism, American Religion and the Unanticipated Reformation,” Tuesday, Sept. 26 at 7:30 p.m. in G9 White Hall. The event is free and open to the public.

Butler is the Howard R. Lamar Professor Emeritus of American Studies, History and Religious Studies at Yale University, where he taught for 27 years, and adjunct research professor of history at the University of Minnesota, Twin Cities.

His books include “Power, Authority, and the Origins of American Denominational Order,” “The Huguenots in America: A Refugee People in New World Society,” “Awash in a Sea of Faith: Christianizing the American People” and “Becoming America: The Revolution Before 1776.” Butler is writing a book, “God in Gotham,” about religion in Manhattan from the Gilded Age to the 1960 Kennedy election.

“Throughout a prolific and multifaceted career as a writer and mentor, Jon Butler has made a profound impact on the history of American religion,” said Joseph Hodge, chair of the Department of History. “Particularly noteworthy has been Butler's ability to challenge, if not destroy, many of the presumed assumptions and shortcomings of the existing scholarship and reshape the historical narrative."

Butler’s talk will examine Protestantism's powerful and often misunderstood role in American history. From its 16th century beginnings in Germany to the present, Protestantism has fostered frequently contradictory poles of individualism and collectivism, anti-authoritarianism and subservience, and reform and repression.

All of which, experts say, have played critical roles in the promotion of religious liberty and its denial throughout American history, particularly when linked to divisions over American culture, values and politics.

Given the historic importance of Protestantism in America, Butler posits that how we understand these contradictory forces plays a central role in understanding and healing America's 21st century cultural, political and religious divisions.

The first annual Rush D. Holt Lecture was presented by the Department of History in 2011. The lecture series was opened by the Honorable Rush D. Holt, Jr., a congressman from New Jersey and son of former U.S. Sen. Rush D. Holt of West Virginia, after whom the series is named.

The lecture series is supported by the family of Senator Holt through the Senator Rush D. Holt Endowment established in 1998. The same endowment sponsored a biennial historical conference previously organized under the sponsorship of the WVU history department.