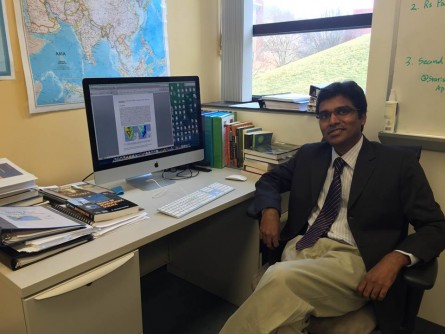 Shanmugasundaram received the award for his research on recommendations for water resource management in a changing climate over southeastern India.

The conference was organized by the Center for Atmospheric Research and Climate Change of Annamalai University in India. The event’s theme was sustaining the Veeranam Lake, a man-made lake built in the 10th century by King Rajaditya Chola. Thousands of farmers depend on water from the lake for agricultural production.

“As the conference is about the sustainability of Veeranam Lake, they have identified that our work at the WVU Climatology Lab captures the merits of restoring and expanding the currently decaying legacy of Chola-style ‘no regrets’ water management infrastructure,” Shanmugasundaram said.

The goal of the conference was to encourage policymakers, academic leaders, farmers, scientists and students to discuss and raise awareness of the growing threat of water scarcity issues and resulting agricultural needs in Tamil Nadu, a state in southern India.

“As I am from a semi-arid region of southeastern India, I am aware of the impacts of the peculiar monsoon system that prevails on the region, especially the variations in rainfall causing drought that leads to crop production loss, water scarcity and social unrest,” Shanmugasundaram said.

Shanmugasundaram received his doctoral training at the WVU Climatology Lab led by  Eungul Lee, an assistant professor of geography.

"(Shanmugasundaram) was one of our star students. He has trained as an excellent independent researcher, scholar and teacher,” Lee said. “I was absolutely convinced that he would have a major impact in advancing knowledge of the physical and societal aspects of monsoon climate to deal with the challenges of regional and global environmental changes."

Part of Shanmugasundaram’s doctoral research at WVU was focused on the importance of the Chola dynasty’s ancient water harvesting structures found at the Veeranam Lake and its greater relevance to future climate change impacts. His study, which was published in The Anthropocene Review, was coauthored with WVU Professor of Geography Amy Hessland Yanni Gunnell of the University of Lyon Lumiére in France.

“Every scientist wishes their research to make impacts in society; I am not an exception,” Shanmugasundaram said. “It’s a great feeling to know when our research is recognized for addressing climate change issues by enhancing the resilience for sustainable livelihood.”

In his research, Shanmugasundaram focused on the monsoon system that prevails over southeastern India, specifically studying rainfall variability and ways to adapt that variability.

“Ever vulnerable community is important in this region where millions of people are depending on this monsoon,” Shanmugasundaram said. “The doctoral training at the WVU Climatology Lab housed in the Department of Geology and Geography taught me to explore science for finding solutions for societal betterment. The interdisciplinary interactions in the department helped me to look at the multiple dimensions of an issue, which is what I’m doing in my present research.”