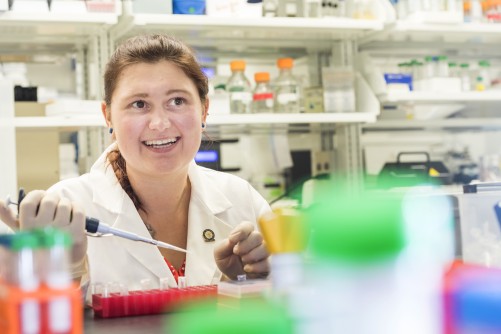 WVU graduate student Stephanie Shumar was awarded $88,000 from the NIH to research an enzyme that regulates coenzyme A levels and glucose production in the liver. Her work is relevant to blood-sugar stabilization in diabetic patients.

Newswise — MORGANTOWN, W.Va.—Conventional diabetes medications tend to fix downstream problems, meaning they typically work by stabilizing blood sugar levels, not by improving the chemical processes that underlie how the body makes and processes blood sugar in the first place. A West Virginia University graduate student is working to change that by studying an unexplored enzyme.

“It is like having a car that is leaking antifreeze, but instead of fixing the leak, you just keep buying cases of antifreeze and refilling the engine” said Stephanie Shumar, a graduate student in WVU’s School of Medicine who is studying biochemistry and molecular biology.

Shumar says that a couple of papers have been written about the enzyme at the center of her work, but not much is known about it or its role in regulating coenzyme A and blood sugar levels. “We are very excited about this project and the potential therapeutic applications”.

By focusing on an enzyme that regulates glucose production, instead of on glucose itself, Shumar hopes to provide a knowledge base on which new medications that target coenzyme A can be built. Such medications may have a broader impact on diabetics’ health, alleviating multiple complications at once and getting closer to treating diabetes itself, rather than just its symptoms.

“A lot of times, people who are diabetic also have cardiac problems, eye problems—all types of problems,” said Shumar. “But the underlying problem starts with the diabetes, which leads to other issues. Whenever you take medication for your eye problems or your heart problems, you’re still diabetic.”

Check http://wvutoday.wvu.edu/ daily for the latest news from the University.