WVU History Professors Explore How Religion Was Used for, Against Unionization in Post-World War II South 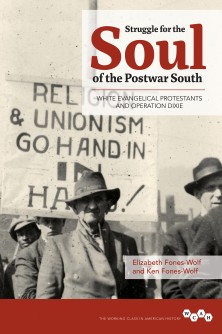 "Struggle for the Soul of the Postwar South: White Evangelical Protestants and Operation Dixie"

Newswise — MORGANTOWN, W.Va. – In the wake of World War II, Americans began a contentious debate over the future of the nation. For some, there was an expectation that the United States, like Europe, would move toward an economic system where almost all people were in unions. Others rejected that view.

But, while many European nations accepted organized labor representation in all facets of life, the United States has declined from a high of 35 percent private sector representation in the 1950s to nearly 6.6 percent today, according to the Bureau of Labor Statistics.

The key battle for and against union membership in the postwar era took place in the South. While much of the workforce in the northern states was organized by 1946, the South was a haven for companies looking to distance themselves from collective bargaining and higher wages.

Operation Dixie was a campaign launched by the Congress of Industrial Organizations, a large labor federation that had successfully unionized the steel, auto and electrical industries in the North, to bring organized labor to the industrializing South. In their book, the two professors explore how union officials and sympathizers – as well as those seeking to halt union expansion – used religion to try and win the hearts and minds of southern workers.

“One of the important ways Southerners understand the world is through their religious views,” Ken Fones-Wolf said. “Union leaders recognized southern workers were religious. They tried to use tactics and people in organizing who could speak to that.”

Union representatives often tried to convince ministers and congregations that social gospels and Jesus preached brotherhood and a message of caring for one another —what unions claimed to represent. Conversely, business and industry officials stressed that social Christianity would lead to Soviet-style Union intrusions on freedom and control of everyday life.

The result? Churches often found themselves divided by ideology. A number of ministers opted to remain neutral in the debate, for fear of upsetting the congregation. Others were outright vocal in their support, or disdain, for labor.

“Some ministers who opposed organized labor actively preached on the pulpit,” Elizabeth Fones-Wolf said. “They said the initials for the CIO stood for ‘Christ Is Out.’”

Attempting to appeal to the religious side of working people was often aided by bribes and blackmail, with business leaders paving church lots and threatening to close down neighboring plants, or bring in strike breakers – anything to shut out unions. With that in mind, many preachers sided with business for the sake of their congregation.

The influence of the church in the South, the authors said, is not to be underestimated. The churches that appealed to northern workers tended to be more hierarchical with religious doctrine drafted at the top, then filtered through representatives to the individual churches. Denominations popular in the South allow more congregational autonomy, with separate churches following their own views.

By using campaign documents from Operation Dixie, a collection of more than 200 oral histories of workers at the time, church journals and weekly newsletters, Elizabeth Fones-Wolf and Ken Fones-Wolf said they hope to better understand why religion was such an effective tool to quash unionization of Southern industries.

“One of the things we heard in oral histories is that the religious beliefs of many workers would not support a union, but many working people nevertheless supported the New Deal,” Elizabeth said. “That doesn’t really fit with the image of the Southern worker.”

Elizabeth Fones-Wolf’s research focuses on the struggle between organized labor and business to shape the ideas and images that constituted America’s political culture. Ken Fones-Wolf is examining the role that religion plays in class relations in Appalachian industries, particularly coal and textiles. This is their first co-authored book.